My hen keeps laying down

For the past 3-4 days my hen, Hathor, has been crouching while walking and laying down all the time and barely moving unless she has to. When offered free ranging she wont even stand to leave the coop.

She poops fine and laid an egg today so I dont think she's eggbound. No worm eggs in the poop. Feathers are fine, no leg mites or lice.

She has been on antibiotics and has had Corid in her water for the past few days as well, since one of my flocks broke out in a suspected respiratory illness. I already lost 2 overnight prior to medicating so I decided I would treat everyone as a precautionary measure since I know chickens can hide illnesses well.

She is seperated in an old cage I had lying around for now and has water, layer feed, and a mixture I made her of scrambled egg, oatmeal, bread, and some oregano.

She has desire to eat but doesnt eat much. She's open mouth breathing ccasionally and has been holding her wings out for balance when she does try to move around. I dont think it's the heat though because it's only 50 degrees out.

She was in with a rooster, and I've seen him stomp on her before because he's scared of me and trying to get to the back of the coop, could it be an internal injury? She has a wider stance when she tries to stand, and she keeps low to the ground and just kind of throws her body to move any distance. It's like it hurts her to walk. When I pick her up she doesnt cry out in pain, either. I'm entirely lost on what could possibly be wrong with her. I cannot take her to a vet as I dont have the funds and I also live way out in the middle of nowhere.

Pictures attached of Hathor, her butt, and her poop.


I'm not sure where to post this, or if I posted it in the right format and I'm sorry, I'm just so worried about her. I thought maybe she was just feeling lazy at first but now I know its something more.

Thank you for your help. 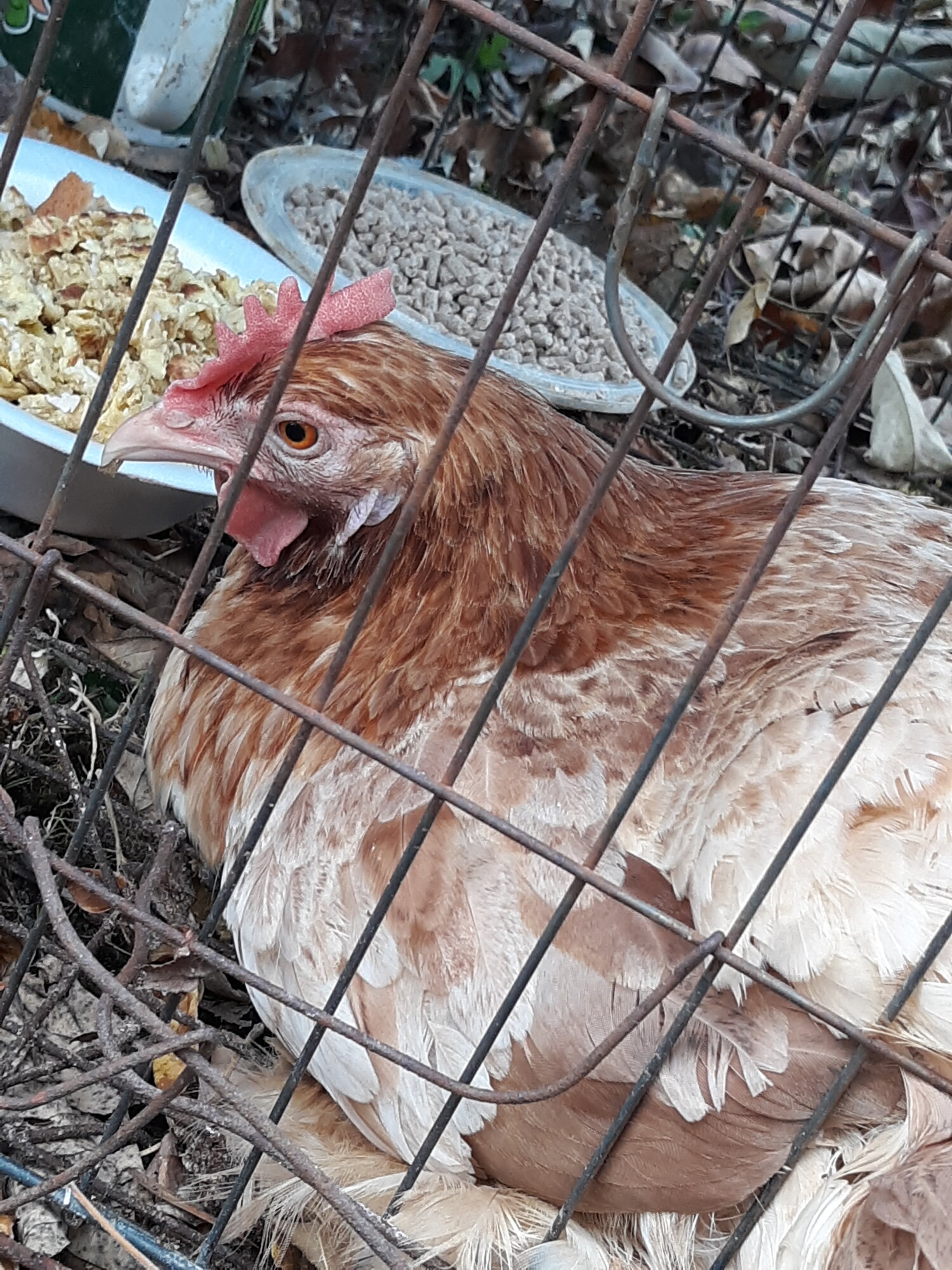 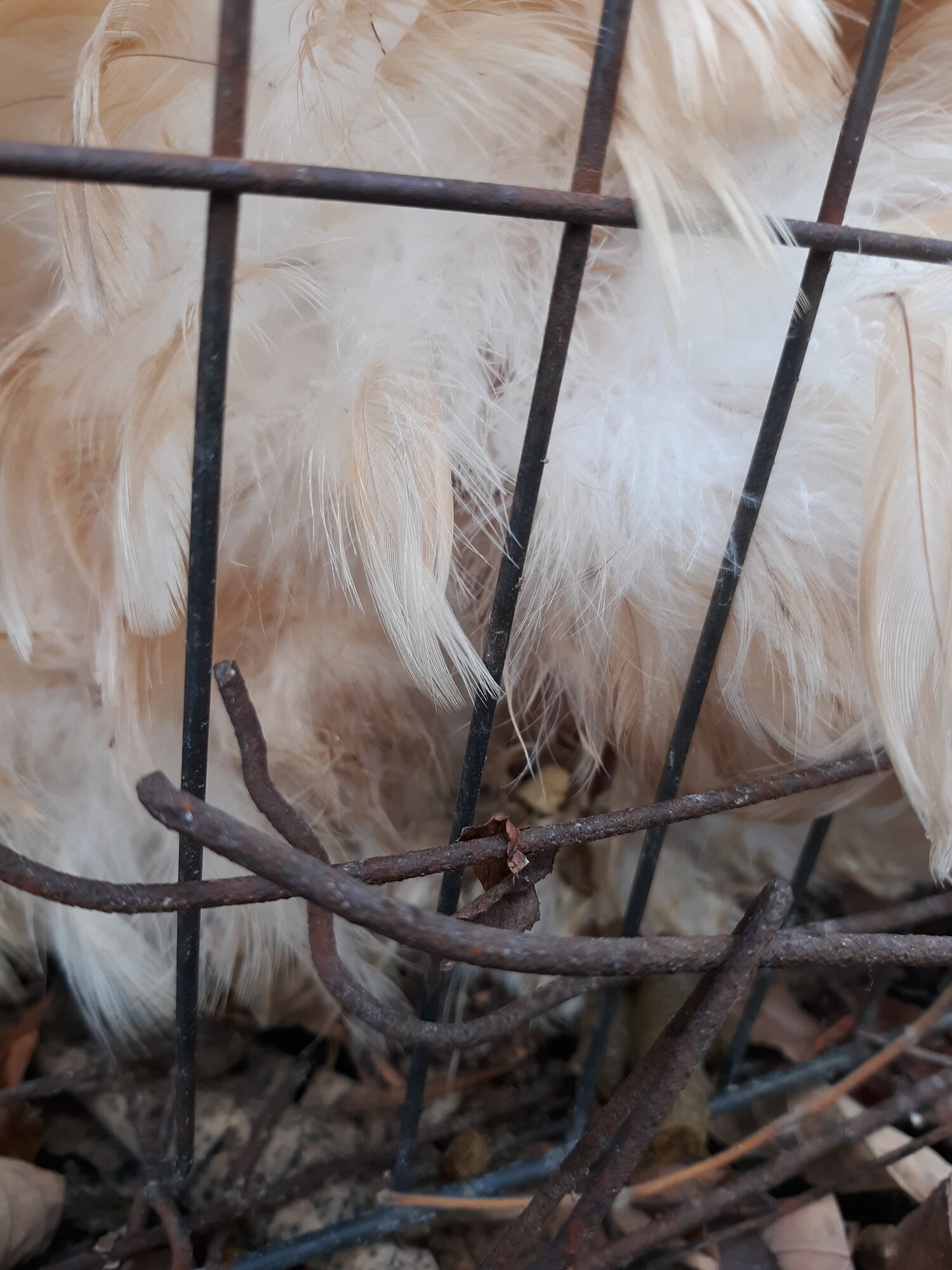 There's a piggy in the pasture

How is she doing now? It sounds like your doing everything you can to help her

chickenlittle21 said:
How is she doing now? It sounds like your doing everything you can to help her
Click to expand...

She is doing about the same. Not any better, but not any worse.
I started giving her some Nutri-drench but it doesnt seem to be affecting her any.

Is she still laying?

Try calling the nearest avian vet. They do parrots and stuff and will take chickens sometimes. If not call other vets or a wildlife vet they might be able to help. Try keeping her away from the flock and see if she gets better on her own maybe a dog crate in the basement or something a place were its quiet and she is able to be outside as well if she wants. Keep an eye on her. Hope she gets better.

howdyitsmia said:
Is she still laying?
Click to expand...

Annalyse said:
Try calling the nearest avian vet. They do parrots and stuff and will take chickens sometimes. If not call other vets or a wildlife vet they might be able to help. Try keeping her away from the flock and see if she gets better on her own maybe a dog crate in the basement or something a place were its quiet and she is able to be outside as well if she wants. Keep an eye on her. Hope she gets better.
Click to expand...

Like I said in my post, I cannot afford a vet, nor is there any around my area. I live like 30 minutes away from the nearest grocery store let alone a vet, they're out more towards the city. I have her separated ever since she acted this way. No one else has acts this way. I should mention that her and the rooster were together in their own enclosure for a breeding program I was working on. The rooster has no signs of whatever it is. I'm fairly certain it's internal damage. She doesn't want to eat or drink much at all, either. I'm doing everything I can but at this point I I think it's just in God's hands.

Have you tried to give her a warm bath (with epsom salts if you have any)? Regardless, I've been surprised how much warm/soak vent/abdomen baths help!!! And I gently massage their lower abdomen and vent area while in shallow warm water to see if I can feel anything. I'm a new chicken owner so no expert. I have 6 hens and had to rehome 4 roos this past summer. Every single chicken LOVES getting baths AND being dried with a hair blower (I first pat dry with a large towel--this also helps keep them calm and allows me to hold them better). I also have on hand coconut oil to put on all their fleshy parts (spa treatment) and shanks/toes, and I put an ounce of vegetable oil in case I need to rub around and slightly inside vent hole in case they're egg bound... You could put her into a large bin with bedding and keep her inside until she either passes a poop from constipation or lays an egg

Wow, it's been a while since I used this site.
But to give an update: She sadly passed away.
We believe it was worms despite having wormed her as we had another hen shortly after get them and have the same symptoms. We caught it before it got as bad though.
It's a learning experience and I'm sad it had cost her life, though I am happy that I still have her children to love and admire, and now know how to prevent and treat it. (I no longer trust DE. Only strike 3 pellets from now on)

Hen heavy breathing with beak open, walking in a crouch