new chicks, and some questions

I haven't had chickens in about 6 years, even longer since I had chicks. My mom and I have been wanting to have chickens again, and yesterday we bought 4 chicks- 3 americaunas, and one rhode island red, from our local feed store. Well, last night, we lost two of the americaunas, and this morning, the remaining one gave us a good scare. I don't know what we did wrong in their care, but it was probably a really stupid mistake. Right now I have the remaining two chicks in an old aquarium, with shredded newspaper, their feeder, and a shallow water dish. There's also a heat pad under one side of the tank, on low. I don't want to overdo it with the heat, but I also want them to be warm. Last night they were outside in a coop, and while it didn't get very cold (its springtime in southern california), I think that might have been our problem. So now they are in the house.
How can I tell how old these chicks are? I should have asked at the feed store. Does my current setup seem okay for them?
Here is a picture of them I took yesterday. They aren't in that enclosure anymore. I was hoping someone here might be able to give me an idea of their age based on the picture. 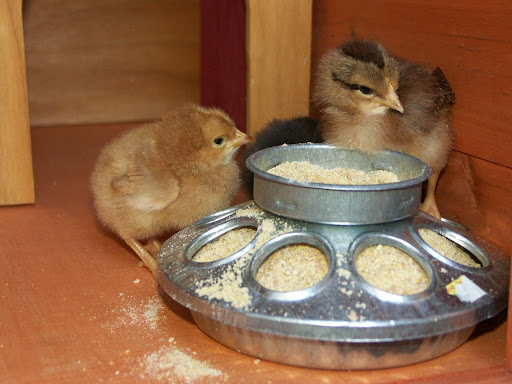 Thanks in advance for helping. Six years ago, my mom did most of the work for the chickens, so I didn't learn as much as I thought I had... Its been a very sad Easter morning, waking up to two dead chickies...

If they're from a feed store they're probably just a couple days old. Do you have a heat lamp on them? Keep the temp at least 95 degress fahrenheit.

Get your self a brooder lamp and therometer. How old are these chicks. Chicks in the first week need to be at 95 degrees. Chicks are very susceptible to cold.

looking at them and comparing them to how my rir chicks look and by their feathers, Id say rir is less than a week old probably only 3-4 days and the other is about a week old. All of my chicks are one week old and have about as many wing feathers as your EE, I remember my rir's having as few wing feathers as yours at 2-5 days old.
Last edited: Mar 23, 2008

First of all........Do you have a heat lamp? Chicks must be kept under a heat lamp. The temperature for the first week needs to be 95F and then you are to decrease it by 5 degrees each week for the first 6 weeks. They might still need a heat lamp at night until about 10 weeks of age depending how cold it is at night where you live. If you don't have a heat lamp, please go get one today. They must have one to survive.

Ya they look like they are one week old i just hatched chicks about a week ago and they look about the same.

Okay, so for now I set up a clamp on desk lamp over the tank, with a 60 watt incandescent bulb. Thats the best I can do until tomorrow when the stores open. I feel like such an idiot now, not realizing how young they are. It was 8 or more years ago when we last had chicks, and we bought them at around the same age, and we never set them up like this... They did just fine, but I guess its not the right way to take care of them. I should have done more research before I brought them home, I always do tons of research before getting new animals, and this time, I just figured since we had them before, we would just do what we did then, and it would be okay.

Good idea! I would also get a thermometer to help you regulate the temperature.

You have come to a great site for tons of information. Look under the index and then under raising baby chicks and you will find more information than you can read. If you don't find answers to all of your questions, don't be afraid to ask.

thanks everyone.
I'm glad I found this forum. Usually I try to join a forum before I get new critters. I've been on a lot of different critter-oriented forums, and some of the people there are just so harsh. I was almost afraid to ask here for advice. I'm glad I did.
Tomorrow morning I'll get their brooding box set up right, and hopefully I won't run into any more problems. We are going to get another 1 or 2 chicks then, too, so we'll have a better number. I think a bigger number is easier as long as they have enough space.
Now, here's a really stupid question- will they ever stop peeping?

I was wondering what kind of chick is it on right side of the pic? I am new to chickens although raised them as a kid. I have about 13 of those colored like yours but bought them out of the bin at Atwoods so I don't know what kind they are. Any help please?

Can i add new chicks?