Hi!
I've been wanting chickens for some time now and finally convinced my husband that it was a good idea. I live in Tacoma and we can have chickens in our backyards as long as they are 50 feet from anyone elses residence or we get permission from them to have the coops closer. Thankfully, we're on a coner 6000sf lot so it will be pretty easy to do.

I lucked out and found a used coop for a screaming bargain (I am sure I could have built something cheaper, but not faster or nicer... and actually, I couldn't do it, since i have no tools.. ha!) So, the coop is so pretty, it's 4x4x5 and it has an attached pen that's 4x6x26")

Here's the coop and run (it's being delivered saturday, this is the previous owners photo) 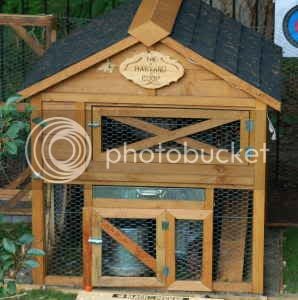 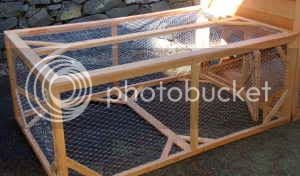 I want to make a roof for the run, I was thinking of using something that still lets sun through. Also, gutters and mini rain barrels. I do live in the pacific NW. Rain is an issue.

The inside has 3 perches, 3 nesting boxes and looks exactly like this: (but this is another picture I found on the internet, not the coop I actually bought.) 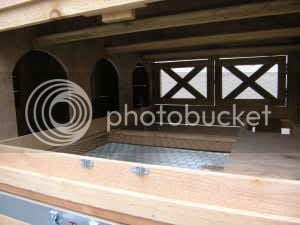 I am getting bricks so I can have the coop off the mud, and I think I will use a bit of straw in the bottom? I am still doing research. We probably won't get chickens until after spring starts. We are going to start with hens. I want 4. I am looking for a Black Australorps, and I also want an Americauna. But I'm unsure of the other 2.

Is there anything that I need to know about coop placement in relation to trees and sunlight?
Should I put anything in the clean out trays such as cat litter? Or does the tray stay empty?
Any good knowlege that isn't discussed in the books?

I don't think you have to worry about placing the coop in sun or shade. Wherever you would like to put it should be fine.

Don't put cat litter in the trays, you don't want your chickens eating cat litter (and they will peck at it and eat it).

You can leave the trays empty or put whatever bedding you choose in them - hay, straw, or wood shavings.

I started out with Black Australorps and Easter Eggers too.

From my experiance (I live in renton, so I am familiar with our weather

) the straw gets worked into the mud, rots, and smells REALLY bad. The big problem I have had with my coop is the rain getting in the open front of the coop (my coop has 3 solid walls and a welded wire fence) and making mud inside the coop.
It is hard to tell from your pictures but does the coop sit directly on the grass, with the chickens having access to it or is there a floor to it? Will it be light enough to move around etc? If it is light enough to move around occassionally I would make sure your chickens have shade in the summer. Also for a cover for the run, you can invest in a good tarp. It keeps the rain out when it rains and when it is actually sunny you can pull it off.
As for the hens breeds my favorite hens are my Easter Egger and my white plymoth rock, however my red hen (RIR or similar breed, we're not sure) is my most prolific layer but isnt as friendly.

OK, so no cat litter. Glad I asked. I would have liked to scoop the poops out easily with a litter scoop. That's ok. The trays slide out and won't be too difficult to clean, anyway.

It does sit on the grass. I'm going to put it on bricks so the wood isn't in direct contact with the damp ground.

The coop is realy nice. What kind of chicks are going to buy?

I'm still looking into the "nicer" more docile ones as I do have little girls who want to love these chickens.

Great deal on that coop - I missed out by mere minutes.

Edited to add that I've read that both Brahmas (if raised from chicks) and Wyandottes are wonderfully docile - I chose those breeds both for good egg production and good attitude toward my 3 and 1 year old boys.
Last edited: Mar 3, 2010

Sounds like a good plan to me. Good luck with it

Edited to add that if you want a really nice hen get a Silkie. Mine is so friendly but they arent the best layers.
Last edited: Mar 3, 2010

So glad you could join us! What a cool coop! I can't tell exactly what each part does from the pics, but I'm sure it's quite functional. Some people like straw, but it seems like pine shavings are quite popular, too. Chickens don't really eat the pine shavings, and I don't know if they pick at straw, but they do eat hay. It can get impacted in their crops if they eat too much.

There's plenty of info here on BYC, so search and read, and ask questions if you can't find the answers. We love to chat!

Automatic door for my hen house?