We have a female blackshoulder, Icy. She is about 9 months old. Her mate was killed 2 months ago. On Friday evening, we picked up a beautiful 9 month old boy, "Bleu," to keep Icy company. He was "freerange" where he lived before, as are my birds. We put him in a run for a few days to acclimate to his new surroundings. He & Icy have become fast friends, and I put her in with him earlier today. He is better, but still NOT happy about being caged! How long should I keep him pinned up before I chance release? He is gorgeous & I REALLY want to keep him around! I would be beside myself if Icy followed him away too. She is so sweet. She is why I have fallen in love with Peas. Any & all advice is greatly appreciated!

How ironic! My first peahen was a blackshoulder and her name is Ice! 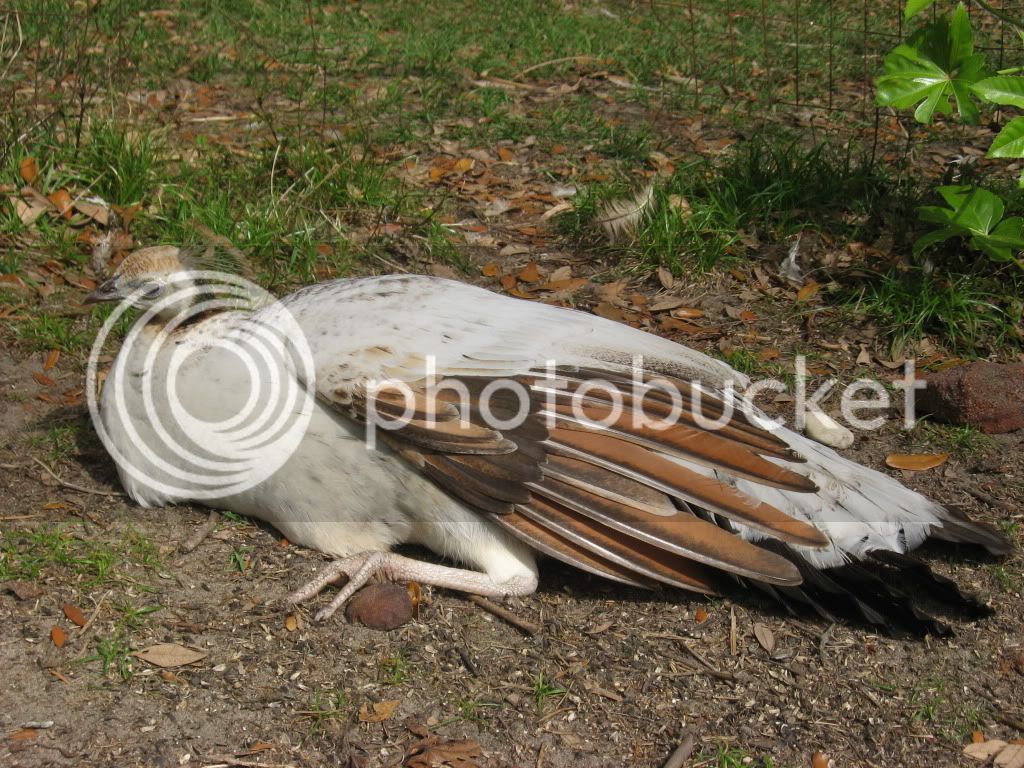 I got Ice from the zoo when it closed down. I got her with a peacock I named Fire. Both were free-rangers at the zoo. I kept them penned for about a month and a half and released them. They stayed for about a month then around Christmas Fire, the peacock, ran away. Ice didn't follow him though she was still in the yard. We thought maybe Fire would come back and maybe he was just hiding or something. A week later Ice was gone too. Luckily we were able to find Ice in someone's backyard. We tried netting her and she flew up into a tree but luckily she flew to a low branch so we pushed her out of the tree and netted her. Neighbors told us they saw Fire, but he never stayed in one place. He was on the move. I still have Ice but she is now kept in a big aviary. She is a great peahen she hatched out three peachicks this year and is a great mom. I think my mistake was risking all my peafowl to free-ranging. Older peafowl especially ones that have grown up free-ranging somewhere else are supposed to be harder to get to free-range on your land, but it can be done and 9 month olds might be good. It helps to have some peafowl penned to help anchor free-range peafowl to your place. I remember when I first got Fire and Ice how Fire paced the pen wanting to get out so badly. I think I should have kept them penned much much much longer or kept them penned and free-ranged their peachicks.

I wish you the best of luck be careful whatever you do. Keep a good eye on them if you free-range them. If you have other birds free-ranging that should really help them to stay also.
Last edited: Jan 1, 2012

I have had a couple of fellows that really didnt like being penned and would pace the fence line religously. I kept one group penned for several months because I just didnt want to risk their loss. It can be somewhat distressing.

I have another group penned now and probably wont release them for some time....

If you are confident that Icy will not run away I would give him a little more time to bond with her and release them both when you feel comfortable with their compatibility....

I guess I wonder how her mate was killed and will that no longer be an issue? It is always a stressful situation when there is a release. And I agree with Minx- I have also released and kept some penned to hopefully keep the released one close by to allow it to get their bearings at the new home.

Her mate, Kevin, was killed by a fox who is no longer an issue. I saw one dead on the road not far from us, and we have not lost any chickens or other animals since. I have a feeling Kevin was probably protecting the chickens & Icy, judging by the collateral damage in the barn. Everything was turned over that night, but no one else was hurt or missing. He was young, but he was a good guy. He used to try to intimidate the neighbors dog if it got too close to the other birds. Poor Bleu is pacing & pacing. It breaks my heart to keep him penned, but I think it is for the best for the immediate future. Icy is calm as ever - just taking everything in stride. She doesn't seem to mind being penned. I got her from a breeder that kept her in a fairly small cage though, so she might remember being caged before. I sincerely thank each of you who has answered. I am addicted to raising chickens, but I see that the peacock thing could become quite an addiction too. They are very interesting birds.

Minxfox gave you good advice. Myself i would keep them penned till spring. Let only one out a time. That way one will call them back.

I had one bunch that after 1 1/2 months I let them out to free range with the others....one went west and one went east...
the female returned but the male stayed out in a tree.... they all have their own space/place to sleep at night...
the next day when I let them out to range, all seemed well until I found the male had been hit by a car.....

I have 7 new peafowl and I plan to keep them up until spring....just don't want to have anything happen to them

they can see some roaming around during the day and some will come and sit and visit them during the day but this
way I know/think they are safer and they can look forward to roaming another day...

I have become very attached to all my birds...chickens, ducks, guineas and peafowl!

O
What color is my new peacock?