Never a dull moment this year. I have a more-than-likely broody youngster right now and I swear she's a NINJA.....

Daisy Mae came to us from the local feed store as a 3 day old chick back in March. She was in the "Easter Egger" bin (they buy from Ideal Hatchery) and from the beginning she always kept her distance from the others. She was skittish to the outstretched hand, but not aggressive. After hurricanes Laura and Delta she was the first one caught actively laying.

We found her first nest camouflaged under a pile of sticks and we collected her beautiful blue-green eggs and brought them in to eat. She laid in there daily and would always look perturbed if we would pull the eggs in daylight with her around. Fast forward to last week and one night she didn't go to their roost tree. I was a bit worried because she's usually the first in the coop in the evenings. We checked her hole and, no Daisy.

The next morning she showed up for breakfast but disappeared less than 10 minutes later. At dark she, again, was not in their tree or coop. I decided to try and follow her after first light.... broodiness was definitely suspected by that point.

She reappeared with the sunrise from nowhere and, true to form, less than 10 minutes later she started heading to the trees. I was tailing her with less than 10 feet between us and then *POOF* she was gone like a ghost. I searched half the day and couldn't find a trace of her. The only thing I was able to pinpoint came shortly before dark. A small owl swooped in near our house to snatch a lizard off of a pine tree and I could hear a harsh warning chicken growl coming from underneath a big tree that hurricane Laura tore down. The waning light wasn't on my side so I still couldn't find her.

We didn't see her the day after her amazing disappearing act at all, but on the second day after my search she came careening around my oldest in a mad dash for the feed can to partake in a hastily swallowed breakfast. Just as quickly as she came though, she was gone. I just know she's setting a clutch. I guess in about 18-20 days I'll know for sure. It just boggles my mind that I can't find her.... she's MOSTLY WHITE for crying out loud!!! XD

My reckoning is that if I'm having trouble finding her she's got herself a pretty secure nesting site. It rained last night as a cold front pushed through so I can only hope it's a mostly dry location too. I've crawled around again under that huge tree some, but it's laid into a think stand of yaupon trees so it's not like you can just lift a branch and see much of anything. I'd have to go crazy with my loppers to really get in there and the last thing I want to do is disturb her after this long. So here's to hoping she'll be a successful, ALBEIT POORLY TIMED, momma!! If not, well, it's a good practice run for her and she can try again in the spring/summer.

I'm not too worried abut her starving either.... they're daily free rangers. We've got nearly 10 acres that are heavily wooded and there's always food stationed all around in this block of trees for them. They love staying in there most of the day as it is and she was nice and heavy before she started to disappear. As long as I spy her once a day/ every couple days I'll be able to at least loosely monitor her energy level. If she hatches anybody out and doesn't kill them I might have a better chance at pinpointing her secret lair.

Does anybody else have supernatural broody ninja birds??? This is the most recent picture I have of her and I pulled it from a video so it's mighty fuzzy. I should have named her Houdini!! 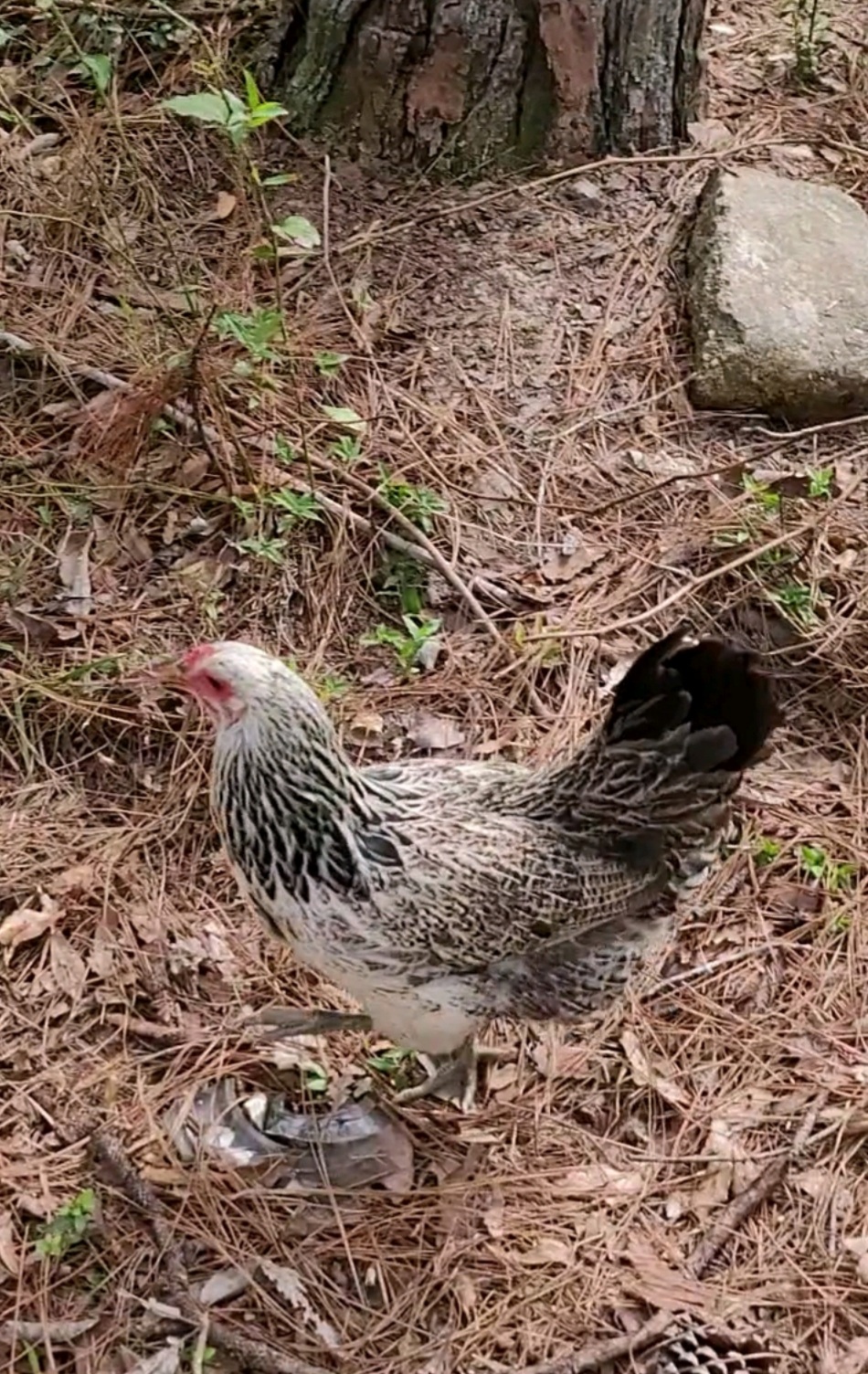 She lays beautiful eggs. These were out of her not-so-secret nest in October.... 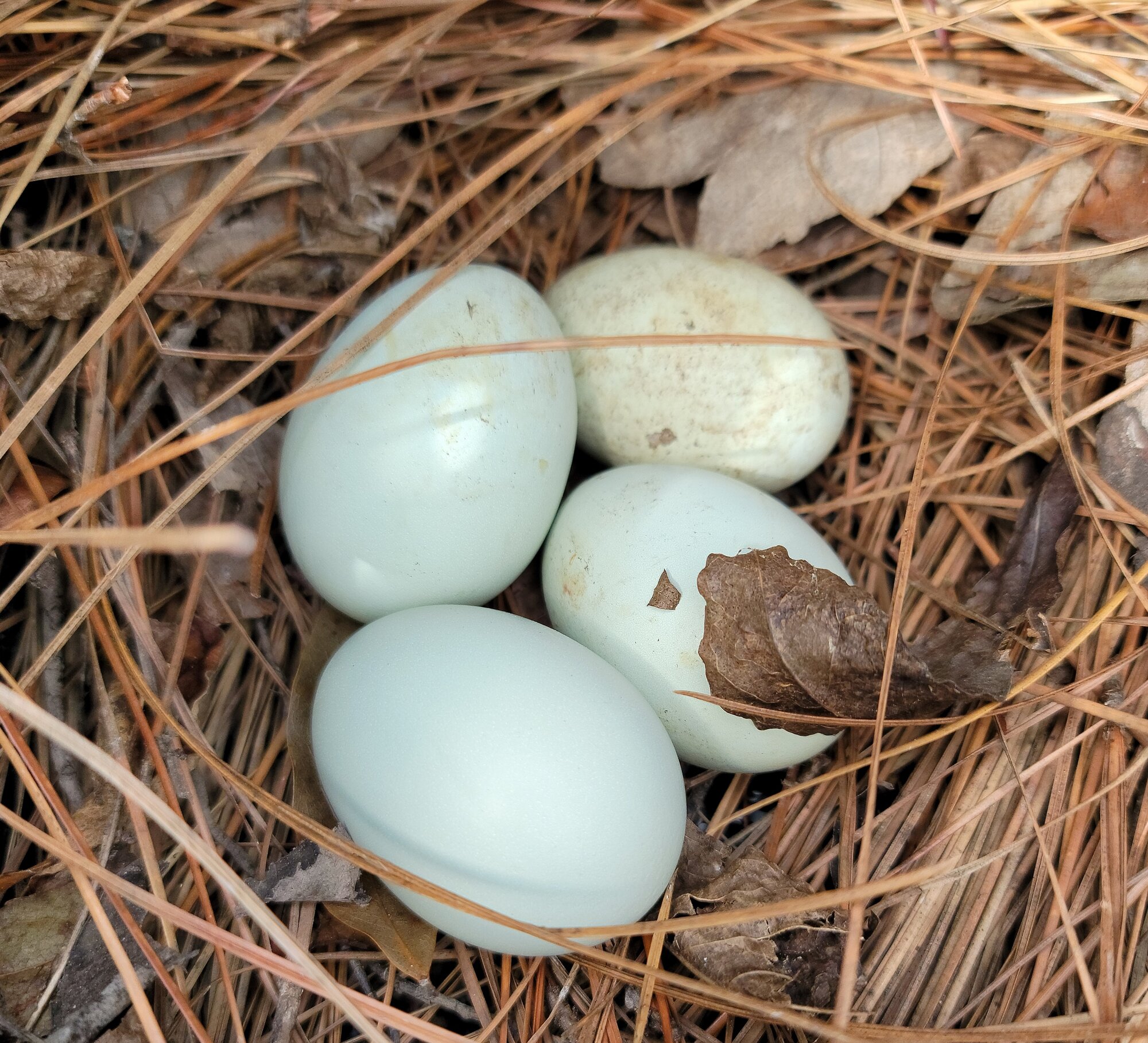 Good luck to Ninja for a successful hatch.

sourland said:
Good luck to Ninja for a successful hatch.
Click to expand...

I certainly hope she has at least one or two hatch.... their daddy, Pretty Boy Floyd, is a white leghorn. Gonna be some barnyard mix cuties for sure

cajuncluckerswla said:
I guess in about 18-20 days I'll know for sure.
Click to expand...

I have to report that after a valiant effort she has given up.... we had about 3 inches of rain last Friday and came home to find her drenched to the bone, cold, and sitting by the door to the coop.

I took the loppers to the "fortress tree" and found the nest, but they were all popped open and in a puddle of water.... clever girl had found some blown down tin in there to lay under but the rising water flushed her out.

She'll try again one day I have no doubt. BUT MAYBE SHE'LL WAIT UNTIL THE SPRING AND ACTUALLY USE THE HANDY DANDY ALWAYS- DRY NESTING BOXES o-O...... Lololololololol

No Christmas morning peeps this year. 2020.... the gift that keeps on taking.