View attachment 1046515 Has anyone had experience with this? Would love ideas or suggestions. My Peahen Lucy has hatched and raised her own chicks for almost 6 years now. She is a fabulous mother and gently teaches her chicks all they need to know. Since my Senior male died last fall, and the current resident peacock is only 2 years old, I thought I would order some white eggs and slip them under her in place of the possibly infertile eggs she would lay this year. Well, just as the eggs were enroute to me, Lucy became critically ill. Egg bound/coccidiosis etc... We saved her, but when she recovered, she had no interest in sitting on her nest or laying any more eggs. So my Mailorder white eggs arrived and sat in the frig a little too long. I bought an incubator and tried my best, but only 1 hatched. Still no sign of Lucy's nesting instincts returning. The male I have was an only surviving egg(coons) and was raised by Lucy as an only child. He is not nice, rather aggressive - (and to dispel any myths about aggressive peacocks) both parents were gentle and kind, and he was raised by his mother, not imprinted to me. So, I did not want Star to grow up an only child like Mr Meanypants, so picked up 2 freshly hatched peachicks from Louden Farms. Now I have 3 peachicks to raise. Never had to do this before. Having watched Lucy teach the chicks to fly up onto an 8foot high perch at 5 days old - I am not feeling up to the job. Everyone has told me Lucy will not take the chicks, and will most likely kill them. Of course I,m not listening. This weekend I have been working around the clock to get these chicks into Lucy's care.
The good news is,....Lucy is willing. The bad news is, the chicks are not...well not really.
The chicks are 4 days old and unfortunately imprinted on me or something. They like Lucy, but don't know to stay near her, scattering in all directions and towards anything that moves. Lucy calls them with her motherly puck puck sound, but they have no clue what that is and pay no attention. Several times I've seen her Lower her head and let them pick at her eyes and jewels. When I was certain she wouldn't hurt them, I put her in a dog crate with the chicks to spend the night last night. It took a long time, but she finally got them under her wings. Mostly they just wanted to stand next to her cheeping. Once they were finally settled under her, I was certain that's all it would take. I envisioned coming out in the morning to a happily bonded pea family. Not so. As soon as I opened the dogcrate this morning, the chicks ran out and scattered. Mostly chasing me and the chickens. I cleared all the birds out of the pen for the day and hoped the little family would get together. Nope. Lucy is trying and deserves Patient Peahen of The Year. She sits on a nest I made and waits for them to come get under her. She calls them with her little pucking sound. Sadly the chicks don't get it. They will stand 2 feet from her, shivering and not acknowledge her presence even as she pucks to them. She picks at the food, showing them how to eat. They are eating and drinking but not with her and Star(white one) is kinda frail. Yesterday and most of today it has been warm, humid incubator-type temperatures, but it's supposed to cool down and rain tonight. I'm not sure what to do at this point. Do I put them all together in the crate again tonight or bring the little ones back in the house and warm them up???
Last edited: Jun 18, 2017 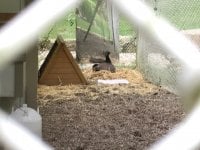 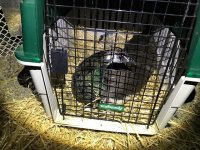 I would keep crating them at night and keep them in a small pen during the day or a small coop if you have space in one.