My polish pullet about 25 weeks today is acting odd and the back of her head is bleeding
Now she’s never ever picked on ! She’s always great and even a bit bossy herself . A polish doesn’t have a skull really so their brain is like right under their feathers so I want to clean it and put neosporin ointment on it like I would other chickens but the brain exposure makes me nervous
For now I isolated her where everyone can still see her but not reach her
Any ideas what I should do?
( acting odd was make no noises and hopping around kind of)
The first picture is just her normally yesterday and then her head today 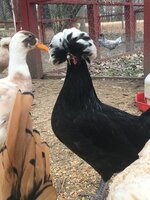 That is a common injury with polish chickens, and both of my 2 suffered this feather picking of their head feathers feom time to time. When discovered early, one can apply Blu-Kote spray to the bloody spot to color it blue, disinfect, and hopefully stop the pecking. Repeat every 2-3 days. Pine tar is soemthing else you may use instead. Her head is not that tender that you cannot apply medicien. Also make sure they are not bothering her. My polish hens looked just like yours, and this is just something we have to watch for. They tend to be lower in pecking order, and cannot see very well do to the feathers over eyes. They bump into others sometimes and may get pecked. One of my hens had her eye pecked and blinded because of that.

Well I did know that but I purposely got mainly low pecking order breeds , however a couple have found their way to me . This one is rather high on the order in my coop , and I’ve never seen her pecked before
I cut their hair lol

Eggcessive said:
apply Blu-Kote spray to the bloody spot to color it blue, disinfect, and hopefully stop the pecking. Repeat every 2-3 days.
Click to expand...

What about neosporin though? Because my chicken friend said she wouldn’t use the other two since my chickens head is white ?

The purpose of the Blu Kote is to obscure the 'red' of the blood. Neosporin will not do that. Right now it appears that she has molted and her crest contains a lot of pin feathers. I would treat her and then separate her and a couple of the most mild mannered flock mates until her crest is all mature feathers and then reintegrate all back into the flock. As @Eggcessive has said this is not uncommon with Polish in mixed flocks. In my opinion it has little to do with dominance.

I dealt with this for 4 years until my hens were separately killed by a hawk and some other predator. It does discolor the white feathera, but BluKote eventually wears off, just as it does if you accidentally get it on your hands. Pine tar is clear and tan, and it tastes and smells very bad if another pecks it. So that might be something your friend may prefer, and it has healing properties.

My polish would stand there and let the others pull their feathers out. It wasn’t an attack on them, except for the time a young cockerel scalped one chasing her all over the yard because she would not let him mate her. That time I had to separate her and use Neosporin until the wound scabbed and fell off. My hens head feathers were pulled out about once a year, one or the other. They would peck one’s feathers, and leave the other alone. The next time it would be the other one.
Last edited: Dec 12, 2019

I use 1” painters tape to tape crest up for improvement of vision and protection of top of head.
You must log in or register to reply here.
Share:
Reddit Pinterest Tumblr WhatsApp Email Link