Probably been asked before- BUT i started out with a handful of chickens- 6 or so... well 2 years later we have 1 roo and 17 hens- the coop size is 8 x4, the run in 16 x 20, usually they free range, but when the weather is bad they are in the coop and run- will this work or will they need a larger run?

The most commonly stated coop alotment is 2 sqft/bird, and 10 sqft/bird for a run. Obviously with free ranging your run can be much smaller. Your coop is smaller than that for 18 birds but you'll know come winter if they can handle it. As long as canibalism and egg eating doesn't occur then your chickens are happy.

My run is quite small for 7 birds, 8x4, but they free range most of the time. Being my first winter coming I'll watch how it goes. Someone posted in the "101 winterizing coops" how her hens did'nt like to walk on snow so she spread hay on top in the run. This to me sounded great! Few bales of hay to block the wind and to spread on the snow so they get excersise is easy winterization for the North east winter here.

Run-wise, 16x20=320 sq ft divided by 18 chickens = almost 18 sq ft per chicken which is *palatial* compared to most peoples' runs. (Though your chickens may be less impressed if they are used to free ranging, I should think they'd be fine unless they are an unusually grumpy breed or have major social issues going on in the flock.

) when they don't even want to spend much time in the *run*, then 8x4 is incredibly tight for the chickens... indeed, I should think you've probably got the whole coop pretty much filled with roost space already? Even if the roosts are high enough to walk under, that's still only about 1.5 sq ft of floor per chicken, *before* subtracting for feeder and waterer.

If it were me I would either try to expand the coop, or try to roof part of the run (properly, so it will withstand snow and wind load successfully!) and put burlap or strawbales or such around part of the upwind side of the run, so that the outdoors is as appealing and 'all weather' as possible. If you are in a windy location be careful about just slapping something solid on the run fencing though as that can cause the whole shebang to blow over.

Thanks- the coop size really is a problem- we were thinking of getting a 10 x 10 shed to convert to a coop... so far they are ok with the coop, but i suspect during the winter it may be an issue

thanks pat- yes the coop has lots of roosts at varying heights- part of the run is under the coop and sheltered, although i like your idea of the bales- might work to get them some more room- yes- we get a couple good snowfalls and an ice storm or two every winter... last year our guineas refused to come out of their tree- 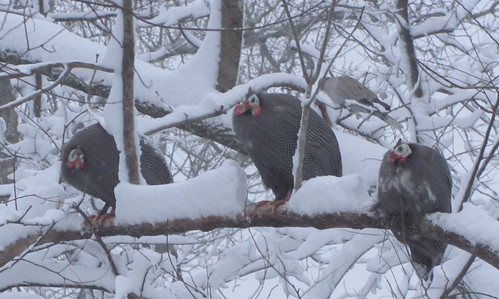 and the chickens weren't too impressed either
Last edited: Oct 19, 2010

1. Yes, get the 10 x 10 shed and convert it quickly. You're going to need it for 18 chickens this winter.
2. Stop buying/hatching chickens.

Joe u always make me laugh.

YEP- You said it, need to avoid the feed stores when they have chicks! although, once i had a roo, and realized he need more hens than i figured... well...you know the rest of the story!

so we have ordered a 10 x 10, will take a week to get here- do we need to insulate it or do anything special other than roosts etc?

W
Is this a problem? Run size and too many chickens