bump....
I would love to see more and know more about these beautiful birds

I was wondering when someone would start a thread for Sebrights

I breed silvers and buffs and I LOVE their personalities. My buff boys are territorial, but 'common!!! They are so tiny it's just funny.

The best quality ones I have though are my silver sebright roosters. I breed them in a small flock of 2 to 2 without any issues... ever. If anything it's the girls being mean to the boys. lol.

i bred them for one season and then sold my small flock, i really disliked their personalities, they were very flighty, and despite having a 20X20 run the hens were constantly picking on each other. I started with a mature m/f pair and added 2 mature hens, the 2 new hens relentlessly picked on the existing hen, to the point i had to separate her because she couldnt leave the perch or she would be mauled. later that year i tired to add 3 new grown pullets and when i went out a few hours after introduction i found they had ripped the head open on one and i had to put her down it was so bad. Thought beautiful i will never deal with sebrights again. the hens are downright nasty in my experiance.

ETA: the one mature hen i had to remove from the pen because the other two picked on her, i put in a communal bantam pen, several cockerals and a bunch of pullets/hens, she ruled the coop with a cast iron fist, i ended up having to re-home her to a free-range flock because she was such a nasty bird.
Last edited: Jul 16, 2010

i only have a trio of them and the roo is aggressive!!! but the hens are friendly

I have two Silver Sebright roos about a month older than two pullets, one Silver and one Golden. All of them are gorgeous.

The pullets were brooded with a Delaware and an EE pullet, and segregated in a grow out coop/run within the big run enclosure. The Sebright boys would parade by those girls several times a day. This weekend I removed the temporary fence and the Sebright boys rushed the pullets. The Delaware let them know in no uncertain terms the Sebright girls weren't ready for them.

So the mature pullets of all different breeds in the rest of my flock are now being mauled by little bitty roosters. (Easily shaken off, if the Head Rooster isn't around to disuade them of that behavior.)

Thanks for starting this thread!

I hope you enjoy this pic: 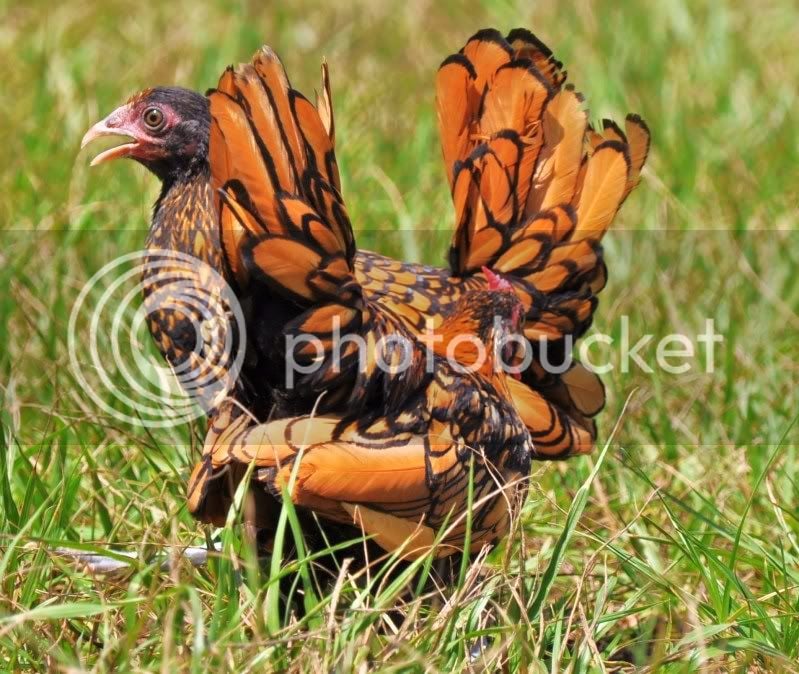 Used to have some Golden & Silver Sebrights.

I have 3 silver sebrights.... They hate me, but then all of that group of chicks hate me... 1 roo and 2 pullets it looks like. They're so prettyy I hope they don't cause issues....
You must log in or register to reply here.
Share:
Reddit Pinterest Tumblr WhatsApp Email Link