I did a search on here for this info and couldnt find anything applicable. I am looking for the fastest, least amount of effort way to kill my chickies next weekend. I was thinking that, since I am using the construction cone method, I should buy some Edge to Edge? shears and have DH sharpen them up real good. In other words, not bypass shears but the other ones that the blades meet. Has anyone used this and do you think it will work?

I'd be hesitant to use shears. It's not that they would not cut through the neck, but because it would be pretty slow compared to an axe/hatchet or even a quick head snap. I have no problem dispatching an animal but if I have a choice they will never know what is happening. I hunt, it doesn't always go as planed. Bothers me every time it doesn't. Think about it this way, chop a small twig/branch on a chopping block and the cut the same branch with shears. The axe is instantaneous, you can actually hear/feel the fibers giving way with the shears. I know I can feel pain faster than that. If I HAD to cut off a finger I'd want the axe. Maybe a chicken reactions aren't as fast as a humans, but I doubt there could be too much of a difference. Just my opinion, I've never dispatched anything with shears before, so I can't really really say yes or no. BTW I don't really like the idea of the commercial dispatchers (the neck breakers) either. If you could spring load them or shears, maybe.

With the term shears used. Most cutters that are called shears are not sharp enough to do the job.

We use tree loppers that I sharpened some more beyond how that come when you buy them are the store. I also tightened the nut that holds to two half together some more. 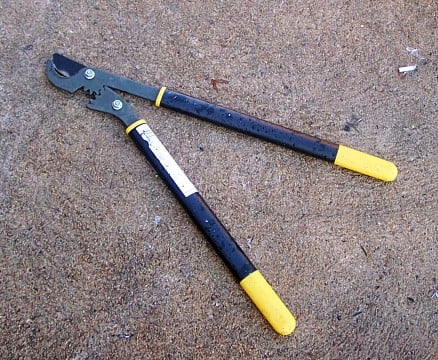 For chickens one snip and its done. Heirtage turkeys is about the same. for Great white and Bb bronze we had to use a knife to cut some skin.

Quote:
Get them off of the roost, hold them by the legs, step firmly on their head and pull quickly. Toss the bird away from you to avoid blood splatter. This is the most humane method I have found. I know it seems cruel, but it is quick and the least messy method I have ever used. New to pet birds, but we had chickens when I was a kid, so this was the method that my mom used.

Yes, this is the way we do it- however instead of throwing them away from you, we drop them into a big plastic (clean) trash can. That way, blood doesn't fly everywhere- and easy clean up.

Quote:
Good call on the can. Never thought of that.

Quote:
That is exactly what I was talking about (blades meet instead of bypass) except with shorter handles. Yes I would want it to be as quick as possible. That being said, I COULD NOT handle watching them or hearing them flop around. Since I am using the construction cone there will be nothing behind it to swing an ax/hatchet against. I am getting everything ready for the big day next weekend so any help now would be greatly appreciated.
The ideas are all good ones, I just know my limits, and I could not do any of that.

The lopper pass each other

With a small pair of hand shears there may not be enough leverage to close them and do a clean cut. Either way they will most likely have to be sharpened more then they are from when they come from a store.

This is going to seem like a silly question, but when you use the step on the head and pull method, does it actually pull the head off?