Should I let her?

Okay, so its almost November and I'm in what would be considered the north end of central Ontario (or the southern area of northern Ontario?) and the weather is going to get unpleasantly chilly very soon. My head hen is determined to be broody but she's young, about 10months old and has never had chicks in her care and I've only done brooder day olds, never broody raised.. My setup is great for the winter, that's not my concern. Nor is Bug's ability to mother, my concern is that if I stick some fertilized eggs under her that I'll be putting her through undue stress and giving the chicks a harder run at growing. I'm probably overthinking this, but I can't decide if I'd be putting Bug through more stress breaking her broodiness again, I've had to cage her twice in the last three weeks, and she stayed fine for a week in both cases after 3 days in the cage and then went broody again. This time she went to work on her breast feathers while my other girls crammed themselves in the nest box with her before I caught her. And of course I stuck the crate back in the shed thinking she was done her silliness. So do I take the crate back out or do I start looking for some hatching eggs or do I wage the broody war again?

She seems very determined to be a mommy so I say give it a try but if something starts happening that really concerns you you can always cut it off at anytime. (in those 20 ish days so to speak)

Lovem all said:
She seems very determined to be a mommy so I say give it a try but if something starts happening that really concerns you you can always cut it off at anytime. (in those 20 ish days so to speak)
Click to expand...

I think that's exactly the reminder I needed, thank you! There's no reason I can't step in!

I went back out to check on the ladies after the hail had passed (I don't know why I do these things, their coop is built as solidly as our house

) and she somehow made it back into the nest in the pitch black, by the light of the lightning maybe, so I'll find her half a dozen or so eggs in the morning!

Bug's all set! Comfy and cozy sitting on a clutch of 8. I wish I had taken a pic of the eggs to get some guesses to which egg belonged to which breeds! 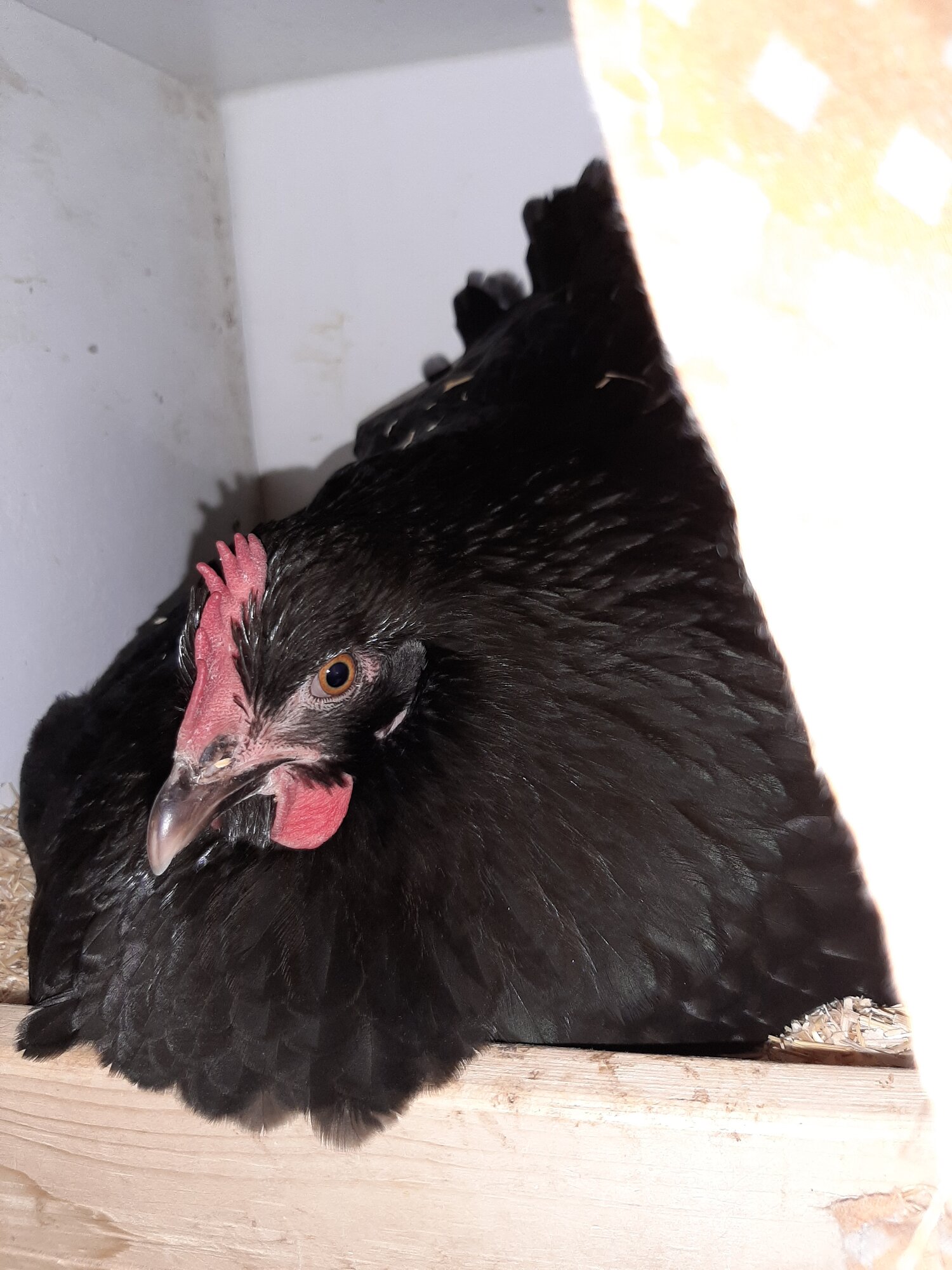 The eggs she's protecting so fiercely are out of double laced barnies, black and splash ameraucana, cuckoo marans and dark brahmas topped by a lavender EE roo. There were two different types of brown eggs, some dark brown speckled eggs, and some pretty blue ones! Cross your fingers for me!

update us when they hatch!! i’d love to see

First few days were hectic, my reds hoping into Bugs nest when she would hop out to do her business, her hoping into the nest next when hers was full. That wasn't a huge deal, I just waited patiently for the interloper to vacate, removed the offending unfertilized egg and popped my broody back on her clutch. After that, she started waiting until the worst of the reds were done laying before leaving her nest... which worked semi okay except for the girls that decided to hop into the nest box with her to lay!

After Bug went ballistic on them, they seem to have given up on that box, thankfully before anything got broken!

All horribly nerve wracking for my broody and myself! Especially with all 8 eggs candling beautifully! Makes me wish I had shoved the remaining 3 under her big fluffy butt in the beginning! Please tell me that at 11 days they're no longer viable so I can get it over with and throw them out? Am I the only one who feels so reluctant to discard fertilized eggs? I've been so tempted to try rigging up a homemade incubator...

So the last 5 days have been spent finishing integrating my silkies in with my flock so I can kick them out of my partitioned brooder area and move Bug and eggs in there. I've been totally paranoid about the move and kicking myself for not doing it before giving her the eggs where she chose to set... everyone I know keeps telling me she won't abandon the nest if I move her and the eggs will be fine, but part of me wants to leave her be until they hopefully hatch, but it's a 2" drop to the floor, and I don't want to lose any to a fall either, especially since it's been so darn cold! Its warming up tomorrow so I think I'm ready... We'll see...

Do I sound like a new mother yet? I haven't been this anxious since the first trip out of the hospital parking lot and the drive home with my first kid!

Other than that, I was seriously surprised how fast a hen can get off the nest, drop her load, get a drink, fill her crop and get back on that clutch! And watching the other hens, even my pushy production reds, rushing out of her way as she screamed and charged about made me laugh so hard I almost cried.

Anyone who says chickens don't have personally has never been given stank eye by a broody for laughing at her!

I know I'm probably not supposed to feed Bug on the nest, poop factor and all, but with the last few nighttime temps going below freezing, I've been offering her a bit of scratch when I check on her before lighted out. The idea of her sitting using up allll ŕnight, I offered, she turned me down, but ŕt growl and shriek at me like she did in the beginning, or like she still does at the other hens, she coos almost like a F when she peeks around her curtain to when I go in tŕŕhe got to get a recording, it's just so dang adorable!
You must log in or register to reply here.
Share:
Reddit Pinterest Tumblr WhatsApp Email Link