Turns out when I went to pick her up it looks like a Slipped Achilles Tendon (with the foot almost completely twisted around, poor thing). Which the girl caring for her just assumed was a broken foot (I never really liked her). From what we've looked into chances are slim on fixing her leg since nothing was done to correct it for at least 4 days if not the better part of a week. We'll be doing some gentle stretches with her leg and trying to see if we can loosen things up enough to get it back in place but I'm thinking that amputation might still need to be an option, though we'll see how things go. In spite of kind of hop-hobbling around she is eating and drinking fine.

I'll post any updates or fingers crossed, any progress, along with some pictures when I get them.

Kinda wishing it had been a broken foot, probably easier to fix than an untreated Slipped Achilles Tendon but I guess time will tell. Any suggestions if you've dealt with this before or something similar? 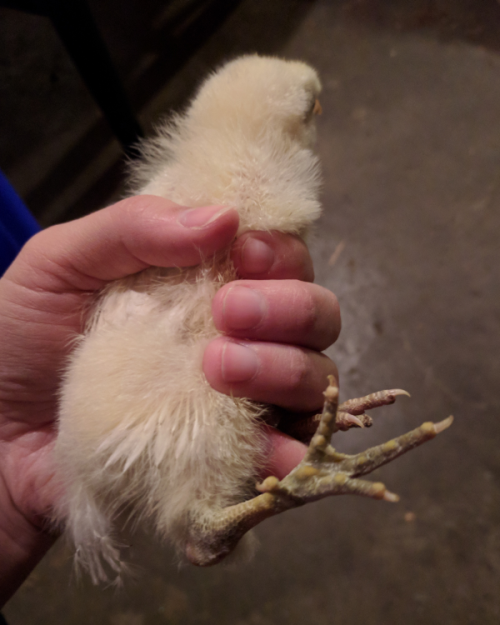 Edit: Found this video of a vet doing some physical therapy for a young hen with a similar issue. I'm trying to hold out a little hope since mine is still smaller she might be able to bounce back somehow.

Today I'm likely getting a chick with a broken foot that I will attempt to save. I've seen her a couple times over the last week. Until I pick her up later today I don't have any pictures or much info yet.
Her current owner was going to cull her but hasn't yet so I decided I'd like to give her a chance.
Chick is yellow and likely about 2 weeks old? She holds up the leg with the injured foot, she holds the foot curled but it looks a bit unnatural, toes a bit twisted is the best I can describe. Other than the foot injury she seems to be eating and drinking just fine and over the last week and she seems to be growing well still. Doesn't seem to be any broken skin or bleeding, just broken on the inside. I'm not sure if the foot is warm or cold, so I'll check if it has circulation. May have got injured by falling or in transit from hatchery delivery box to brooding box, but I'm not really sure.

Since it has been broken for the better part of a week here are my questions:
Should I just let it heal and see if it adapts somehow or should amputate later if needed?
Should I try to splint her foot to see if it can heal somewhat properly? How would I do that?
Should I just amputate the foot? At a vet or just at home? Could I use an elastrator band?
Have any of you had a related experience? What did you do and how did things turn out?
(I will be calling a vet to ask these questions tomorrow when they're open.)
Last edited: Mar 25, 2018

Hopefully someone with first hand knowledge will chime in here!

Hopefully someone with first hand knowledge will chime in here!
Click to expand...

Thanks, I'll look at those. Fingers crossed but the girl I'm getting them from said it's definitely broken.

Well she'll need to be mobile in order to survive, so you might have a vet look at it.
Good luck!

I had a chicken that broke a toe at about 6 weeks of age. I never knew how it happened. I just let her heal and she was fine! She started walking normally again, laid eggs and acted like the other chickens. I named her Toady (toe-dee) because of her very obviously, very crooked and broken toe! Hoping for the best!

Turns out when I went to pick her up it looks like a Slipped Achilles Tendon (with the foot almost completely twisted around, poor thing). I figured it might be a lost cause from the beginning but I'd like to give her a shot so I'll keep this updated with any changes or progress we have with her along the way.

Any updates on your chick?? I have a chick with almost the same case.

P
5 week old- is this a slipped tendon?