One of my six chicks are sneezing. it started when I put in new pine shaving and no paper towels underneath. the chicks were very interested that they could find the bottom of the brooder and are constantly making little holes in the pine shavings. The chick is not sneezing regularly. Only about once every 1-2 minutes. She is also sitting very fluffed up on top of my ecoglow 20. Could it be dust? will it harm her if I put electrolytes in the water even if she doesn't have respiratory problems? will the electrolytes hurt the other chicks? These are my first ever chicks. she is a buff orpington.

How old is the chick? Are there any other symptoms (hold her up to your ear to see if she is wheezing, check for discharge). If sneezing is the only symptom it might well be the pine shavings. Try taking out the shavings and putting in fresh damp dirt. Chicks love to scratch and can find lots of little goodies we can't see in fresh dirt plus grit for their gizzard. All our chicks are raise by mommas on dirt. They start scratching and pecking in it within a few days of birth. Its what they are meant to do. Just dump the dirt out in a few days and put in new. You can put the dirt with dropping on your garden.

Also you might want to cook up some scrambled eggs (just eggs no milk) and break it up small to give to your chicks. Obviously eggs are full nutrition for chicks. If they are more than a few days you could give them some finely chopped greens, kale, spinach, lettuce and finely chopped tomato. 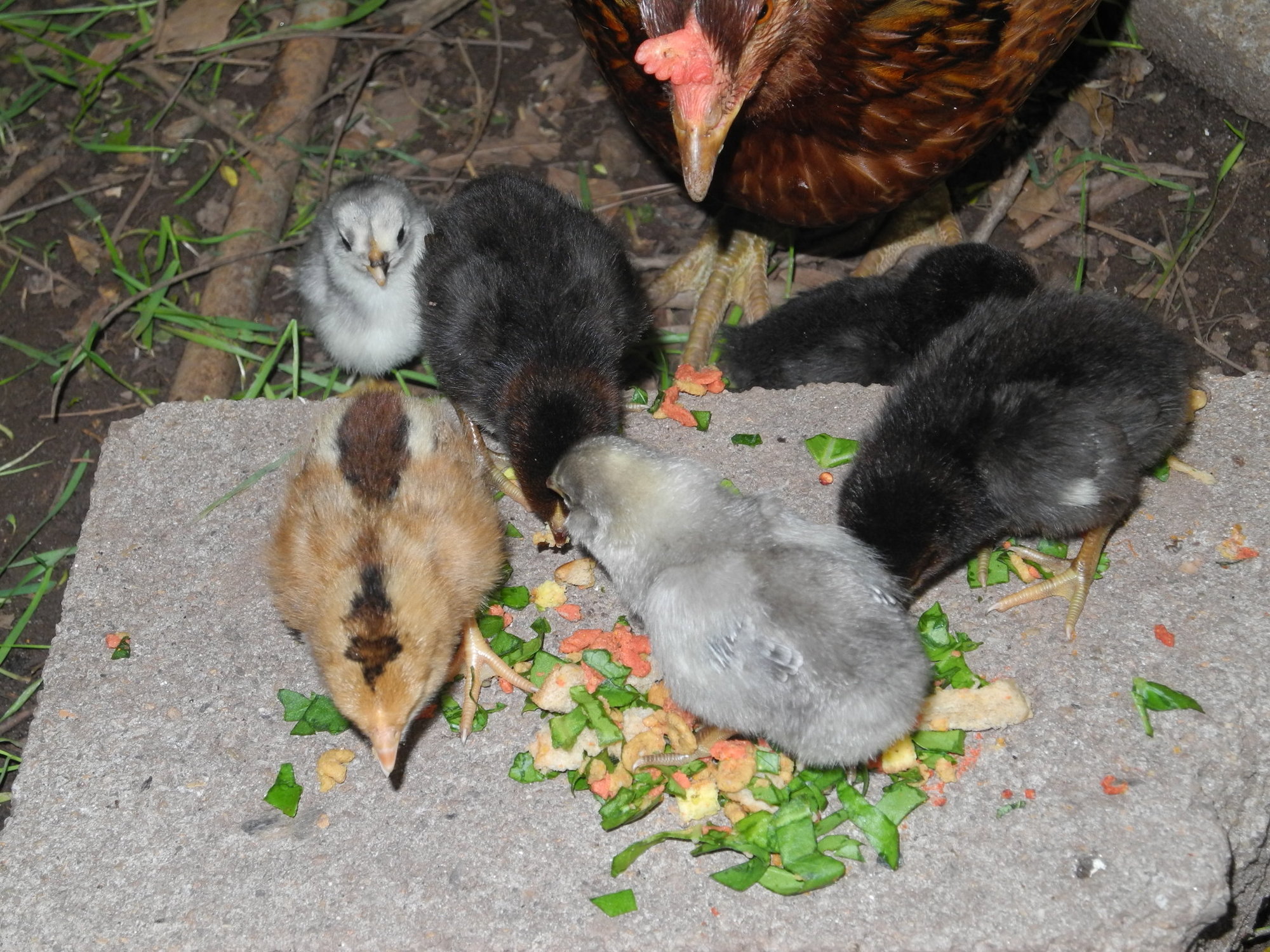 she is 2 weeks old. i have heard that they will have a runny nose or swelling. I don't really know what that would look like. do you by any chance have a picture? I don't hear wheezing. I have a big pack of pine shavings that I would like to keep them on because I plan to put it in there coop with the deep liter method. I am going to try spraying their pine shaving daily. I still worry about her because she is sitting and "roosting" under the heat pad a lot and doesn't seem very active. Would giving her electrolytes hurt her?
S

the other chicks have also started sneezing but I am not as worried because they are active. If i end up giving her electrolytes can I give i to all the chicks? how long should I give it to them for? until they stop sneezing? or should she not even get them?

Electrolytes are fine for chicks, you can offer it to all of them. I'm sure the sneezing is from the dust, although I would keep an eye on the little guy who is puffed up. My chickens are much older, but when they were babies they sneezed on occasion when I changed food or bedding.

Sorry I forgot to add that my chick who sneezed the most was also a buff orphington, and she grew up to be a happy, healthy laying hen!
And WELCOME TO BYC!

Double check the bag and make sure you have PINE shavings and NOT CEDAR.

I have experienced sneezing in my flock from environmental factors (dust etc.) as well as from illness.

Time will tell the difference. Watch them closely (sounds like you already are, so that's good). See if the sneezing increases in frequency. See if the sneezing spreads to other chicks. See if ANY other possible symptoms develop. Look at eyes and nostrils. Even take a pic of your chicks faces up close, then in a few days when you think maybe you might see something unusual, you can compare to the pic of when they seemed healthy and normal to be sure. Eventually chicks with respiratory problems often start breathing with their mouth open (just like when you have a cold and your nose is clogged up). You will be able to hear wheezing. When I had one that was particularly bad, it sounded like the chick was snoring all the time. She ate and drank, but clearly breathing normally was a struggle. I had a chicken once who got squinty eyes, it was from sinus pressure.

If it's environmental, it will just be an occasional sneeze. Nothing more, nothing less. Just like when you get a tickle or a bit of dust or lint or something in your nose. One and done. Chickens kick up dust, live in dust, have dusty bedding, take dust baths, the occasional sneeze happens. I feel like for one reason or another some birds are more sensitive than others. I have one bird I feel like I hear sneeze once a day, and others I swear have never sneezed in their lives.

If it's just an occasional sneeze, don't worry. If it seems to be progressing, or you notice anything else, it's a sign of a bigger problem. Post updates. There are lots of folks on here who can help. I certainly accredit the life of a once sick chick to the members on BYC who helped me treat her.

spicy6 said:
she is 2 weeks old. i have heard that they will have a runny nose or swelling. I don't really know what that would look like. do you by any chance have a picture? I don't hear wheezing. I have a big pack of pine shavings that I would like to keep them on because I plan to put it in there coop with the deep liter method. I am going to try spraying their pine shaving daily. I still worry about her because she is sitting and "roosting" under the heat pad a lot and doesn't seem very active. Would giving her electrolytes hurt her?
Click to expand...

discharge on a sick chicken would look much like that on a human, ie like snot or pus although it can vary in consistency. Eyes could be puffy and have a little pus in the corners.
You said she is sitting under the heating pad. Have you put a thermometer under to see if it is giving enough heat?
The deep litter method takes time to build up, I don't think you can get it going with the small amount of poop your chicks are producing. I can't recommend dirt highly enough right now especially with sneezing chicks. If you aren't going to mind your chicks being on litter that is a large part poop, I can't see why you would mind putting them on dirt at least for a few days to see if it helps. Since this started when you put in new pine shavings it seems obvious to me that the first thing you would do is remove the pine shavings. Assuming you didn't shave them yourself you really have no idea what is in them. If you won't go for dirt, try straw or leaves. Both can be used of deep litter as well and are far more natural than pine shavings. I read that some think deep litter should only be done on dirt floor coops. With deep litter what you are doing is turning poop and plant material into soil. So what would be the problem with having them on dirt for a few weeks? If you can get some dirt from under a tree where the soil is rich so much the better. Or if you have made compost for the garden use that. You will be giving them some pre-made deep litter. I think you will find them much happier chicks if they get some dirt.
Usually we raise with mothers but last year we bought some Red Ranger chicks. I kept them in a pen with straw. After a few days I started putting in pans of dirt. They were on them right away, each day I put in fresh dirt and could hardly set it down before they were in and scratching. So maybe you could put clean straw and give them some pans of dirt. Its possible as they scratch in the pine shavings that little bits are breaking off and getting inhaled.

See this artilce http://www.fresheggsdaily.com/2012/08/straw-vs-shavings-my-choice-for-coop.html
We always have bags of shavings on hand because we use them in our horse stalls, so I opened a bag and spread them on the floor of the coop. The potential advantages of the pine shavings from what I could see were:

- easier cleanup, almost like cleaning out a kitty litter box, I could just use a rake to remove the soiled shavings and chicken poop
- fairly inexpensive
- already on hand
- nice pine smell
-minor pest repelling properties in the pine

Within minutes, some of the chickens had come in to see what I was doing and began scratching in the shavings, as chickens are prone to do.

Within two days, I had three chickens with respiratory problems. They were breathing with difficulty, one was braying almost like a donkey and squeaking in between breaths. (Thank goodness, I was able to treat them fairly easily with VetRx and saline solution in their eyes and they are all fine now.) I immediately suspected that the shavings were the culprit.

Also chicks are more sensitive to the dust in their shavings because they are so little and so low to the ground. Anything a chick stirs up and is airborne is quickly and easily inhaled and can be an irritant. Once they are full grown they are not quite as close to the ground and it's a bit less of a problem. Perhaps dirt is the answer as @Kat C says! Still keep an eye on them though in case it is infection.