My cousin just hatched 5 chicks. One of them developed what we thought was splayed leg at 1-1/2 weeks old. She suspected injury due to possible trampling by the other chicks. When I first saw this chick I researched the best I could and came up with vitamin supplements in combination with hobbling. She called me several days later and concerned that it might be a dislocation. I went to see her and the chick had improved slightly with the hobbles. All I could think of to do was to wrap the tendon area with vet wrap and continue vitamins and hobbles. Cousin discontinued treatment due to affected leg being thin and not developing at the same rate as the other. Chick is now able to walk on the affected leg and roost but turns the foot to the side when walking. Getting along with the other chicks who are also protective of her. She is now almost a month old. Is there anything that can be done to correct this deformity at this stage or is it best to let her alone?

ll this chick will never get any better
it needs the use of using the leg and will never be like anormal chicken so she will just have to keep it happy and safe from any chicken bullying it.
sad to say the treatment of hobbling was too tight put on the leg.
some use bandaids put between both legs so that the injis straightened by the use of it.
http://www.urbanchickenpodcast.com/ucp-blog-025/

Splay Leg (also commonly called “Spraddle Leg”) is a condition that causes young chicks to have one or both of their legs slip to the side of their bodies twisted out from the hip, making it impossible for the bird to walk or even stand. Splay Leg is often caused by the use of slick surfaced materials (e.g. newspaper) for brooder bedding. The condition may also be caused by vitamin deficiency or incubator temperatures being too high or fluctuating.

Splay Leg is usually reversible if caught early and treated immediately. If left unaddressed, the splay-legged chick will be unable to reach food or drink on its own. Ultimately, the untreated bird would be permanently lame and have to be culled.

Chicks suffering from Splay Leg should have their shanks hobbled together to allow the bird’s legs to correct themselves. Though various household items can be used as a hobble (e.g. rubber band threaded through a short piece of drinking straw, bandaids, string, etc.) the preferred tool for this purpose is a self-adhesive medical wrap. Medical wrap is fairly cheap to purchase and widely available. I personally like 3M’s Vetrap and keep a stock of it in my chicken medkit (e.g. Vetrap Bandaging Tape

' target="_blank">3M Vetrap Bandaging Tape). Using a simple binding material, the splay legs are hobbled (tied) together so that the bird can stabilize itself enough to stand and walk. After a few days, if the treatment is effective, the chick’s legs should be strong enough to remove the binding.

If you suspect a vitamin deficiency, you can add a supplement such a Nutri-Drench (POULTRY NUTRI-DRENCH QT - 1 Quart

' target="_blank">POULTRY NUTRI-DRENCH QT – 1 Quart) to the splay-legged chick’s water. Be sure to closely monitor any hobbled chick to ensure that it is not being trampled by the other chicks. You will also want to ensure that the hobbled chick is able to access the food and water easily.

Chicks suffering from Splay Leg if properly and promptly treated when the condition is first noticed, can completely recover from this ailment and enjoy normal, active lives when fully grown.

Use a self-adhesive medical wrap to create the hobble for the splay-legged chick. I have a one inch wide roll of Vetrap brand medical wrap. Despite being only an inch wide, I found it necessary to cut the tape in half (lengthwise) to be a proper width for the chick’s leg. You are only wrapping the chick’s shanks below their hock joints (i.e. knees). 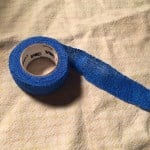 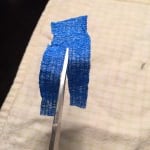 Cut two short pieces of the self-adhesive medical wrap (“Vetrap”) into one inch pieces. Then used these short pieces as “pegs” wrapped around the injured chick’s shanks. These two pegs provide a better anchor for the length of Vetrap which will serve as the actual hobble. Be sure not to wrap these peg pieces of Vetrap too tightly around the bird’s shanks – you don’t want to cut off circulation to the bird’s feet. 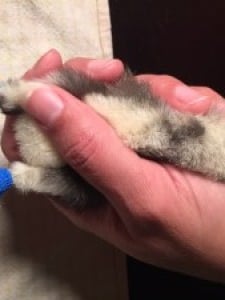 Next cut approximately six inches of the proper width Vetrap to be used as the actual hobble. Secure this segment of Vetrap to each of the pegs on the affected chick’s shanks. The hobble should be about an inch to one and a quarter inches wide between the bird’s two legs. Hobbling the splayed legs together in such fashion allows the injured chicken to stabilize itself enough to stand and walk. You should gradually narrow the gap of Vetrap between the two legs a bit (as the chick’s splay legs improve) so that the bird’s legs are finally back in a normal position.

Don’t be alarmed if your chick struggles at first to get its footing with the hobble. The chick will learn to use the hobble to stand and walk. Also, expect that your chick is going to initial hate the hobble and try to pull it off. Don’t worry the chick will eventually grow used it. 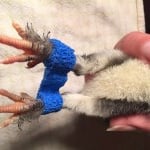 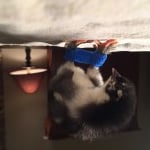 Here's some very good information on leg issues in poultry. It does cover slipped tendon.
If you have some photos that may be helpful. It may be worth trying to see if it can be fixed, sometimes it can't.

Do continue to offer poultry vitamins contain B2 (riboflavin) or crush a human B-Complex tablet and add it to the feed.

My WET MASH PROBIOTIC RECIPE withVit E and Vit B Complex and Selenium added to the wet mash
is very good for all chickens especially sick chickens.
For this problem I recommend my wet mash probiotic with yoguart be given.
I prefer to use the wet mash probiotic that includes chicken feed, yoguart and milk with applesauce
because chickens will eat the yoguart completely in the wet mash where as some chickens will not just eat yoguart ans it gets on their beaks, of which then they throw it away when cleaning the beaks
as you will notice if staanding too close to them eating the yoguart

I would suggest and advanced case of E.coli.
due to the illness the chicken has.

A)
chickens do get some upset in the gut with E.coli and then it goes to a nervous disorder
natural probiotic wet mash with Vit E and Vit B complex nd selenium added immediately
basically the chicken has some nerve damage from the E.coli do this immediately
need neurolodigal vit E and Vit B complex and Selenium for E.coli and the nervous disorder Also the apple cider vineager in water

(3 also need to crush a vit B complex pill in tabsp and add tsp of water to it
put it in the chickens wet mash after it is dissolved.
D the same with the Selenium tablet and add to wet mash

(-B) THIS IS FOR ONE CHICKEN
natural probiotic wet mash
2 tbp of dry crumbles
1 tbsp flax seed meal (the kind people take)
3 tbp of milk sweet, sour or buttermilk
1 tbsp of non flavored yogurt
2 tbsp of apple sauce
put it on top so the chicken can smell and see it
mix good and put the
vit E liquid as directed in the wet mash
and crumble the Vit B complex tablet in a tabsp and add to the wet mash
do same with Selenium tablet and add to wet mash.
**BESURE AND MIX VIT'S VERY GOOD IN WET MASH***

(6 Do this twice a day for 7 days to see if the chicken is better
then do this once a day for another week then once a week for a while
this should give the nervous system some stability and cure the bad E.coli in the gut
(6-A) they should clean it up in 20-30 minutes
this will help them get good gut flora
also put 2 tbsp of ACV in gallon of water and keep giving them this water for a week straight
then give it 3-5 times a week for life
Glenda Heywood Cassville Missouri

G
Splayed leg, tendon or something else?