While molting, it is normal that the usual pecking order changes and they become quite ornery and stand-offish, as the incoming pin feathers hurt very much and they avoid being touched or getting close to each other during this time. Often times you even can find a molting hen spending the night in the nest box on her own.

My thoughts: If you removed/rehomed Sophia, Dorothy might just start bullying another one of the hens.

I once had a beautiful and very big Olive Egger hen that would always start to bully and chase other hens, terrorizing them, no matter which of my many flocks I put her in.
When she finally injured my beloved Swedish Isbar Dolly to the point that I had to put the poor thing down, I had enough and butchered the Olive Egger the same evening, together with the rooster that did not protect her but allowed this to happen.

Peace and harmony are essential for a healthy and productive flock.

Ongoing stress caused by bullying behaviour of flock mates will lead to susceptibility to all kind of diseases and parasites, as the harassed chickens will not eat right or be able to enjoy dust bathing etc. They sometimes even hide inside the coop on the roost and don't eat or drink at all, just to avoid the uncalled for aggression.

Oldcastle said:
@aart I've updated the post, but I'm in the Pacific NW. Regarding the enclosure I'll quote my edit:
Each morning we let them out of their run into the larger fenced area and when they go to bed we lock the door. They usually get a few hours a day outside of the enclosure too.
Click to expand...

That eglu might be a bit crowded for 4 birds, even tho they have more space the rest of the time a crowded coop can fester aggression.

Breeds: Dorothy and Sophia are both Eastereggers. The other two are Austraulorps.

I have a four hen, 2 1/2 year old, flock. Last week the alpha hen (Dorothy) suddenly became very aggressive with the number three hen (Sophia) one morning when we let them out of their run into the larger enclosure. None of the other girls pick on Sophia and Dorothy doesn’t pick on the other girls beyond pecking order stuff (though she is acknowledged as the alpha and they are even more weary of her now).

We had noticed over the summer Dorothy doing this strange behavior when they would go to bed where she would pick on Sophia, and then when Sophia would jump up on a roost in the run Dorothy would "burrow" (for lack of a better term) underneath Sophia's body and above her feet. Sometimes she would kind of pick on Sophia when they were going to bed too, and we'd bring her in and that would be the end of it. The next day everything would seem normal.

To preemptively address some questions we've seen in most blogs/writeups on this topic:

1- Sophia shows no sign of illness. In fact, we have another hen that has a heart issue and no one picks on her.
2 - They get treat blocks and have plenty of room to roam.
3 - We let them out in the yard and free range nearly every day.

We decided to put Dorothy in "chicken jail" for a week, so between last Friday and today Dorothy lived inside a crate in a home office. We'd let the girls free range a bit, and put them away and then let Dorothy free range alone. We had read this "resets" the pecking order, but sadly, that did not help. This afternoon we let the girls out to free range, and brought Dorothy out. Dorothy went straight for Sophia and relieved her of a couple feathers.

We've heard of "pinless peepers", but we're a little unconvinced they will help here for a few reasons:

1 - Sophia is absolutely terrified of Dorothy now. I don't know how we could get her to trust Dorothy.
2 - Their nesting box is just big enough for the four of them. I'm not sure they will avoid strife in such a tiny enclosure and I don't know if we could get Sophia to stay in the box to sleep.


We're leaning towards re-homing Dorothy, but that will break our hearts.They are all part of our family at this stage, and while Dorothy has her own little lone wolf personality most of the time, when she gets affectionate it is rather lovely. I just want her to have the best life she can have.

I think making an addition.to the coop would help tremendously because the coop is so small. If this doesn't solve your problem you can use it for Dorothy and a pal . (Adding an extension to my run solved my problem with the hen lowest in the pecking order.)Due to her age I would only consider rehoming her as a pet .I hope it doesn't come to that. Good luck!
O

ChickensComeHome2Roost said:
I think making an addition.to the coop would help tremendously because the coop is so small.
Click to expand...

How would increasing the coop size (the area use explicitly for sleeping and laying eggs) help at this point? Will the aggressor bird recognize that the coop is bigger and stop being aggressive with the victim bird?

The reaction has been immediate each time we've tried to re-integrate Dorothy with the other birds. Dorothy sees Sophia, and/or Sophia sees Dorothy resulting in Sophia quickly moving away from Dorothy and as soon as Dorothy sees Sophia she towards her and starts chasing her.

I'm willing to increase coop size, but I need to stop what has been a huge and unexplained spike in aggression first.
Last edited: Nov 29, 2021

Oldcastle said:
How would increasing the coop size (the area use explicitly for sleeping and laying eggs) help at this point? Will the aggressor bird recognize that the coop is bigger and stop being aggressive with the victim bird?

The reaction has been immediate each time we've tried to re-integrate Dorothy with the other birds. Dorothy sees Sophia, and/or Sophia sees Dorothy resulting in Sophia quickly moving away from Dorothy and as soon as Dorothy sees Sophia she towards her and starts chasing her.

I'm willing to increase coop size, but I need to stop what has been a huge and unexplained spike in aggression first.
Click to expand...

Chickens hate being crowded .Imagine coming home to only a bed to sleep in and having to go out in the cold for food or water or to exercise your legs? Chickens actually love a roomy coop .The use them anytime you have bad weather. I only wish I could have made my own coop bigger .I did add a wide poop board up next to the vents and they roost up there in the heat of summer.They also jump up there in the mornings to get my attention when they want out.They can see my backdoor thru the vents.Fortunately they have a wide roosting bar below they roost on out of the draft. They have a T shaped roost that runs left to right below the poop board .They only sleep on the poop board in the hot summer months. 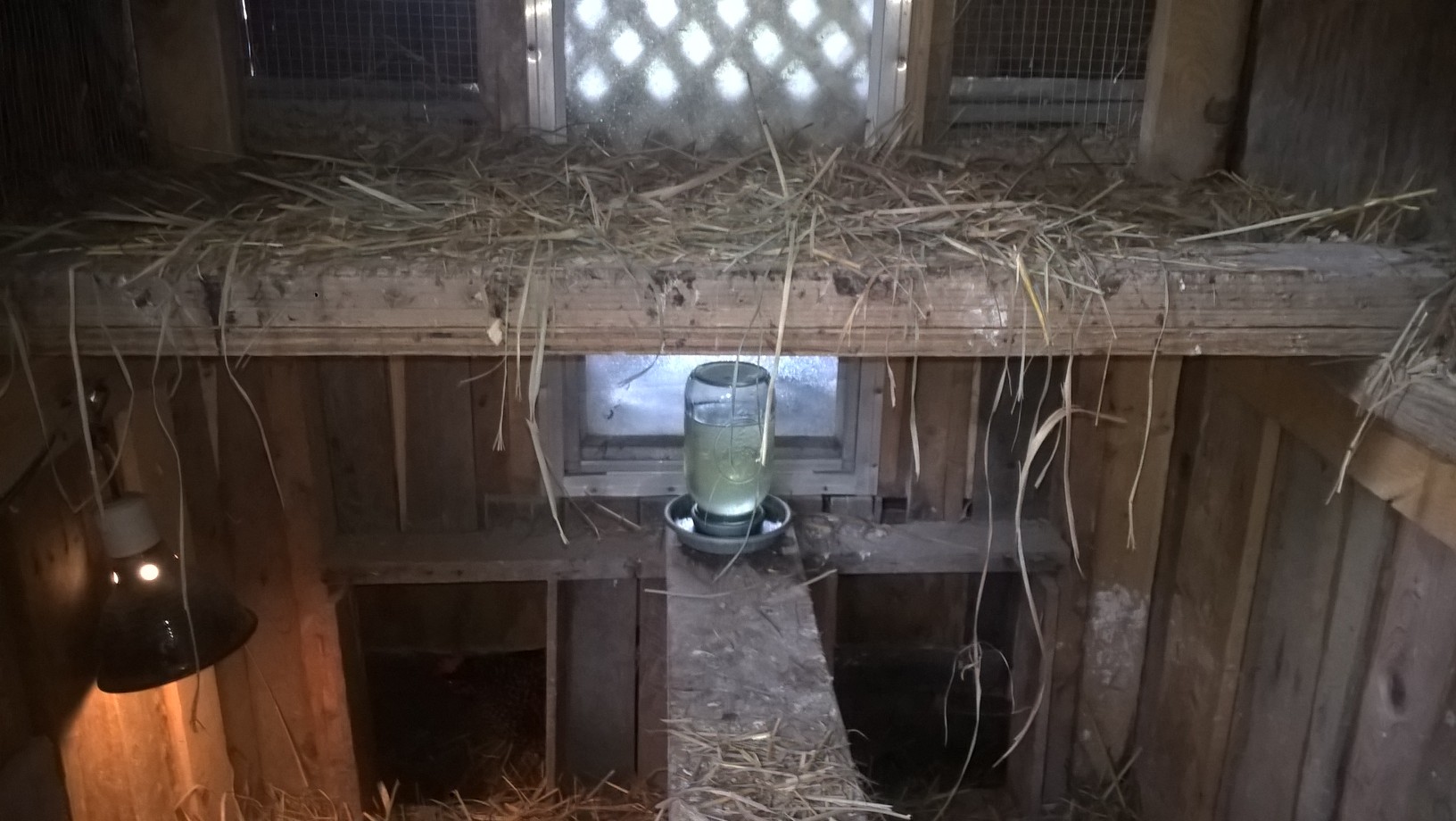 Ridgerunner said:
Welcome to the forum, glad you found us. Just wish it were under a little bit better circumstances.

@aart the way I read this it's a 9x3.5 coop and a 20x21 feet run with a single large nest box. I usually look at room issues first but the attacks also happen when they are free ranging. I don't see this as a space issue at all. I think Azygous is right, it's a personality issue. It may become a space issue also this winter if they are confined to what I think is the coop section by snow or weather but we don't know the location so we don't know climate. That's where knowing location could help. That's when it could become deadly if they don't have outside access every day.

@Oldcastle thanks for all that information, that helps a lot. It eliminates several potential causes. I don't have Azygous's patience to try much of a rehab, the most I've ever done is to try isolation. Sometimes that works, sometimes it doesn't. You tried that.
We also have different personalities and goals, it's not just the chickens. I don't keep individual chickens, I keep a flock with changeable members. I try to solve for the peace of the flock. It sounds like your flock is fine with either Sophia or Dorothy out of the picture. Sometimes I've resolved issues by removing the victims, sometimes I remove the aggressor. Remove does not mean you have to kill or eat them, it can be permanently house them separately or rehome, either selling or giving away. If you are willing I don't see anything wrong with trying to rehab.

Good luck with this. Some parts of animal husbandry aren't always easy.
Click to expand...

I agree! Whatever has caused this change between the two will only get worse this winter if the OP lives in a cold climate. It "could become deadly " as you stated. Especially "if they don't have outside access every day" . Having a bigger coop gives the victim more places to hide or escape injury. I also lowers the stress of the others in close quarters .

Oldcastle said:
How would increasing the coop size (the area use explicitly for sleeping and laying eggs) help at this point? Will the aggressor bird recognize that the coop is bigger and stop being aggressive with the victim bird?
Click to expand...

I agree, that is a long term project. And viciousness needs to be stopped ASAP. I solve for peace in the flock NOW, at this time.

ps: This might sound crazy - but put the pin less peepers on all of the chickens. Aggressors, victim, and non - aggressor. Might really help.

Oldcastle said:
How would increasing the coop size (the area use explicitly for sleeping and laying eggs) help at this point? Will the aggressor bird recognize that the coop is bigger and stop being aggressive with the victim bird?
Click to expand...

It will not now unless you leave them locked in the coop section only when they are awake. To me, your "space system" is how much total room is available when they need it. It doesn't matter if it is in a coop only or a coop and run as long as the run is available when they need it. Some of that is how you manage them. Many people lock them in the coop section at night for predator protection and leave them locked in there until relatively late in the morning. For them coop space by itself could be pretty important.

Another reason they may be stuck in the coop section only for extended periods of time is your climate. Winter especially can create conditions where all that outside space isn't available. I don't know your climate so I don't know if that is a concern for you or not. Winter is not a big deal down here but for many people on this forum it is.

B
My rooster is very aggressive

My Hen is Being Aggressive!
2 3