Transitioning from roofed to roofless run

In an unfortunate turn of events, I'll have to take the roof off of my run, because the town is counting the roofed run as a "building" and applying the building zoning code to it, and, as a building, it's too close to the property line

(nevermind that I asked permission to build it as such in that location and got the okay from the two town officials in charge of this...

). So, we are where we are, and I need to take the roof off. I have two questions.

First - can I replace the roof with this welded wire mesh: 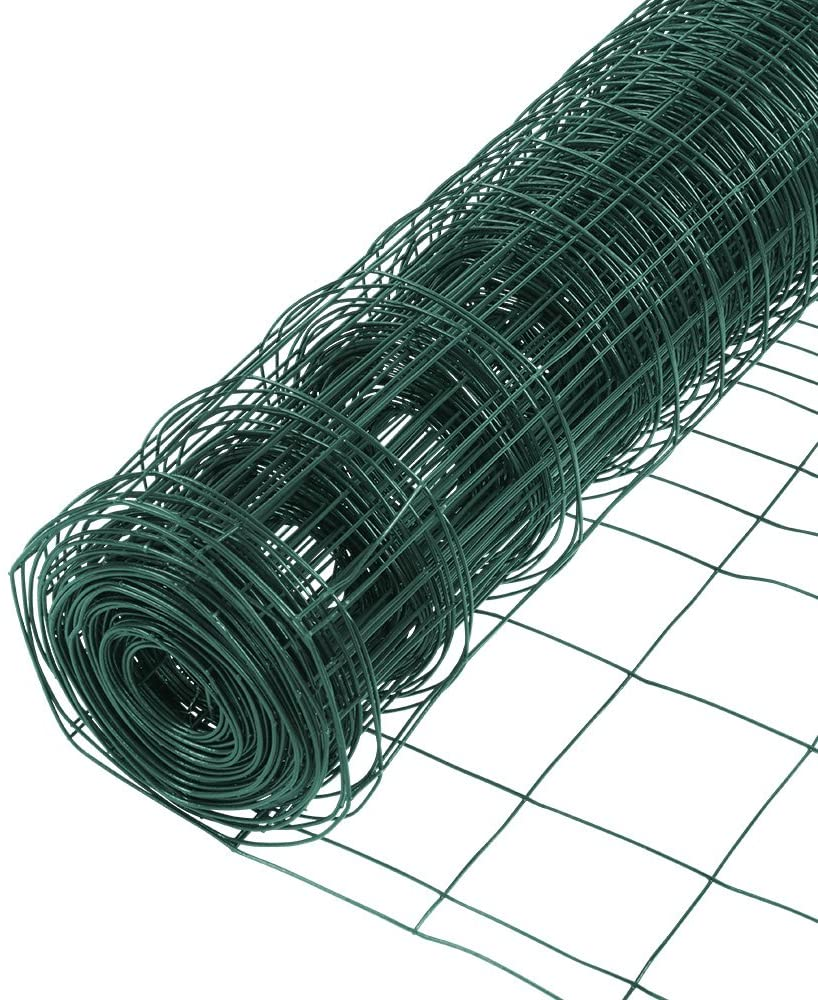 It's 2x3 inches and 16 ga. I know the spacing is too wide to stop everything, but this will only be over the top in place of a roof, and the chickens will be locked in the coop at night... I'm doing this balancing act between the town saying it can't be "covered" on top (definition of "covered" being stretchy and up to interpretation here), and my chickens being safe. Wider mesh makes it look less "covered". I know there are no clear answers, and dense HC is the best, but still... Given my situation, what do you think the risk is? I live in the suburbs and while we do have some animals, it's not teeming with wildlife.

And my second question. I'm sad to see the roof go because it kept the run dry. My chickens have never known precipitation, and probably won't be happy with the roof gone

I still want to give them something overhead so they can use the yard in rainy/snowy weather, but I can't put anything on the roof. So I had this idea and bought two large patio umbrellas

Nobody regulates those, so I can just put them in the run under the overhead mesh. They are square shape, so I can put one against the side of the coop flush with the wall, and give them a dry area to walk out onto when exiting the coop. And I'll put the other one in the opposite corner over their run perches, so they can have another dry area to hang out in. Patio umbrellas are meant for the outdoors so I'm hoping they'll do the job and be okay outside, though I've never had one myself and don't know how well they do in wind/rain/snow. That's where I'll appreciate your input. The run is pretty sheltered in a corner of the yard, with a 5' tall retaining wall 8 feet away on one side, and a 6' tall privacy fence on the other side of that corner (west and north respectively). For the winter, I'll put plastic (shower curtains) along the sides of the run on the south and east as well. So it will be pretty sheltered on all sides, with not a lot of wind blowing through. I'll anchor the umbrellas as well (one against the coop wall, and the other against the run wall). And I'll tilt them so they shed rain/snow better. Would that be enough? We don't get a lot of snow anymore. Every few years I'll have to take the snow blower out, the rest of the years there isn't enough to justify it.

What do you think? Again, I know there are no clear answers and part of this is accepting some risk. I just want to see what people with more experience think about this setup.

Clarifications
(since I can't reply to every comment after this thread ballooned, I'm condensing the clarifications and answers to questions here so they don't get asked over and over).

- To see pictures of my setup, go to my coop page, linked under my profile picture

- I am only talking about the run, the coop is fine (fully roofed and moved farther out so it complies with zoning)

- I was here first; coop had been built when neighbor moved in but no run or chickens yet. I talked to him and he was fine with it, watched me build the run, accepted offer of eggs and small talk, never said a thing against it until after it was built. Started complaining before there were chickens there yet. Suddenly he was against the idea of chickens, not anything in particular that they did, looked, or smelled like, because they weren't there yet.

- There is no problem with the chickens themselves, as verified by multiple inspections from the town's Health Department. No smells, noise, roosters or anything else from his complaints that can be justified.

- I tried being nice first, offered eggs once they start laying, offered compromises, problem solving, modified the run over and over to address specific complaints, but nothing was ever enough because he just didn't want them there. Being nice accomplished nothing - he perceives kindness as weakness and gets even bolder, so it backfired.

- The town's building commissioner said I can't cover the run with anything other than wire. So no tarps, plexiglass, canvas, shade cloth etc. He said that the run is too close to the property line for a roofed structure, but if it has an open top, then it's in a different category (pen) and would be okay where it is.

- The "letter of the law" isn't specific enough to cover this kind of structure. The run is in a gray area, and it's up to the commissioner's interpretation to decide how to apply the law. He's trying to work with me and suggest how to modify it so I can keep it where it is (no roof). Which is still better than telling me to get rid of it, which he could've done but didn't. I'm still pissed that he okayed it before it was built, but oh well... I'm trying to look on the bright side here.

- I can't just move everything. My yard is not that big, and there are things in the way - large raised garden, fences, garage, and part of the property is on a steep slope. I would need to rebuild it anew very far out, in the middle of the only open part of the yard where my kids play... So I need to find a way to keep it where it is.
Last edited: Oct 24, 2020

Change in America begins at the dinner table

Ask them to make an exception. Tell them the alternative is a blue tarp, and you would rather not do that.

MarkJr said:
Ask them to make an exception. Tell them the alternative is a blue tarp, and you would rather not do that.
Click to expand...

I'm at war with the neighbor over the chickens and the town is trying to please both sides, so they're letting me put wire on top, but no tarp, sadly. I would have LOVED to put a fluorescent-colored tarp for him to look at, though!

Change in America begins at the dinner table

Even better. Remove roof, place tarp.
Where in the regulations does it say no tarps.

Wow I am so sorry for your situation. I’d say that size wire is totally fine! Most predators that could get through that are nocturnal anyways, and they’d still have to climb the remaining run to get to the top. That wire will keep out bird predators, and a raccoon at least won’t fit through those holes if they do decide to climb to the roof.

MarkJr said:
Even better. Remove roof, place tarp.
Where in the regulations does it say no tarps.
Click to expand...

I spoke with the building commissioner and he said the regulations can't anticipate and encompass all kinds of things people might think to build, so they don't get down to details like that. It's up to the department's interpretation and discretion on how to apply the regulations. The guy said that he doesn't really care what I put on top, and would've otherwise let me keep the roof, even, IF nobody was complaining. Our town is very complaint-based, they like to let people do their thing unless somebody raises a stink. Well, my neighbor did. So the building commissioner said that, because this is a controversial structure now and the neighbor is complaining, he can't let me have it all and needs to strike a compromise. So I appreciate that he's trying to work with us and not outright asking me to get rid of everything.

humblehillsfarm said:
Wow I am so sorry for your situation. I’d say that size wire is totally fine! Most predators that could get through that are nocturnal anyways, and they’d still have to climb the remaining run to get to the top. That wire will keep out bird predators, and a raccoon at least won’t fit through those holes if they do decide to climb to the roof.
Click to expand...

Thanks! This makes me feel better.

K0k0shka said:
So I had this idea and bought two large patio umbrellas

Nobody regulates those, so I can just put them in the run under the overhead mesh.
Click to expand...

I have a tent-style picnic pavilion over my little coop while it's in its temporary position to give extra shade from my brutally hot summers.

Also, would a partial cover be a roof or just an awning in their regulatory "system"? (Scare quotes since it seems that there really isn't any system about it).

Your umbrella idea sounds great to me; those with more experience than me will hopefully chime in if it’s not. Is an inspector definitely coming to check on compliance (wondering how they found out about it in the first place...)? If not, could you just cover with 1/2 or 1/4 inch mesh & rig the umbrellas to stick out on top?

3KillerBs said:
Also, would a partial cover be a roof or just an awning in their regulatory "system"? (Scare quotes since it seems that there really isn't any system about it).
Click to expand...

I asked about a partial roof, at least along the edges beyond the setback requirement for roofs, and he said that technically I could do it, but again, because the neighbor is complaining and raising such a stink, he has to say no. The situation got really ugly - the guy hired a lawyer and is looking for loopholes in town laws, trying to find a way to get rid of my chickens. It's pretty ridiculous. So the building commissioner is asking for no overhead coverings at all so that the neighbor has nothing to use against me. But I was thinking an umbrella or two underneath will be safe. Especially because said neighbor has a patio umbrella himself, closer to the property line than mine will be.
You must log in or register to reply here.
Share:
Reddit Pinterest Tumblr WhatsApp Email Link