I am almost done with my coop and need some input here. There is a hole in the floor plenty big for an exit but I am just not sure how to construct a trapdoor that will be very secure. I am not builder - I have some skill as I love putting stuff together but that's about it. I might shorten the height here as it seems like the exit ladder might be a tad steep and the ladder will go underneath the trap door (I hope

). The problem is that having the trap door open towards the ground won't work. I think it has to be within the coop, opening up toward the ceiling. Is that possible? If so, how?


My coop was in real shambles when I got it but it was CHEAP. I've tightened it up, painted it and my plan is to create a run as well, detachable. Any ideas for how to do detachable would be MUCH APPRECIATED. I look at lots of pics, that helps tremendously.

My chicks have about 3 weeks to go, so plenty of time. I will be enclosing the front door that opens out as well.

Also, any thoughts as to how to handle nesting boxes? Ventilation? Winter is brutal here. I've been contemplating for awhile, still haven't figured it out. It would be an awful lot better to put the popdoor in the WALL. Especially since that is a real small coop for nasty winters, so you don't want to lose any more floor space than can be avoided.

Why not just make the run (the part that sticks out, I mean, that you haven't made yet, not the 'downstairs' of the hutch) in a way that it includes part of the hutch upstairs wall... then you can have a normal popdoor thru the wall and a ramp or step down into the run. Problem totally solved.

As far as winterizing a teeny coop like that, it is difficult and you'd be a lot better off if you could put the chickens in a real building for the winter, like a corner of an outbuilding or shed or garage. But you can use that hutch if you *have* to, it just won't be pleasant or optimal for you nor the chickens. Can you build the run actually the full height of the hutch, and then roof the run (or the part of it nearest the hutch), so that you can have ventilation openings high on that wall, ventilating into the roofed-and-mostly-plastic-wrapped run? That will buffer temperatures a little bit and help keep the worst wind and snow out, while still allowing fresh air.

Absolutely, I can bring them in my garage for winter. What a great idea. I have a full side of a double garage. They will fit fine. What a relief...but what is your suggestion for the floor? I guess the concrete is good but something else? How to clean that all winter? Forgive me, I'm NEW new. In terms of selling my house one day, will it be evident I had chickens in there and stained floors?

I'm not sure I get what you mean about ventilation though. I read alot, I see advice about ventilation holes...do you mean that? Any thoughts on nesting boxes? I could take off the back of this coop and extend it a bit. I was thinking of that. I want to do the best I can here with little money and not regret anything (well, much anyway).

Quote:
The only downside of having them in an attached garage is that you may have more mice than you would otherwise. The problem can be minimized by keeping the feed in the coop (house) portion and making it as inaccessible to mice as possible.

The ideal solution would probably be to build a run attached to your garage (could access through a garage window if you don't want to cut a pophole sized hole in the garage wall, and happen to have a usefully-placed window). You *could* keep them totally in the garage 24/7 I suppose but it would not be the best idea.

If you were able to do that -- an outdoor run attached to the garage, and either use the hutch or make some other arrangement for indoor living quarters -- then there mightn't be much issue with them ever *being* on the garage floor. But to whatever extent they were on the floor, they would not stain it *badly* (truthfully I'm not sure they'd stain it at *all*). However if you are concerned about it, just put down some thin plywood, which will also help keep them warmer anyhow. And shavings over the plywood, of course. And there ya go.

See the page in my .sig below for more information. You need good ventilation (fresh air flow) through the coop all year round, arguably even more important int he winter than in summer b/c humid air greatly predisposes chickens to frostbite. But you need not to have drafts blowing *at* the chickens, which is why tiny coops are hard to effectively ventilate in wintertime (there just isn't really SPACE to separate ventilation and chickens). Having your vents -- which need to be bigger than just some holes drilled int he wall! -- let out into a roofed and sheltered area will reduce draft strength and thus make it a little less difficult to balance ventilation, drafts and temperature in a tiny coop (which is just really difficult to do).

What if you were to think of the hutch as a "for now" item, but spend the next several months energetically scrounging plywood and 2x4s and pallets and other useful items. Long before winter arrives, you should be able to have enough materials to make a much less cramped and much more easily-managed coop for wintertime use. Either in a corner of the garage with an outside run, or as a larger outdoor coop. Possible?

thinking about a wall door for my hutch too. and an addition enclosed on 3 sides with the fourth side open into the hutch. and a run. My bunny hutch was just the beginning of future plans as it turns out.

The garage would have to be a winter deal. I am divorced and I have an agreement about certain aspects on the house as to reselling appeal

. I have to be careful. I could not attach anything to the house, period.

I have seen so many people using old hutch/doghouse combinations, without problems it seems, but now I am getting discouraged here. I could further build on that hutch, perhaps even take it apart and add more wood, going further with expansion.

Thanks for the input, though, I really do appreciate it.
tdgill: see you found my pic

My coop has a pop down door underneath. My husband took a 2x4 and attached it to the underside of the 'hatch' for weight when dropping and ran a metal post out one side with a line tied to it. Which in turn runs to a pully out the side of the coop and I can open and close without disturbing the chickens and they still have floor space with the 'hatch' up and closed. It becomes part of the floor.

I like this design because my underside of the coop is fenced in. I have the option then to open the 'free range' door and let them out or leave them in still to peck around outside, but be enclosed. Like this... 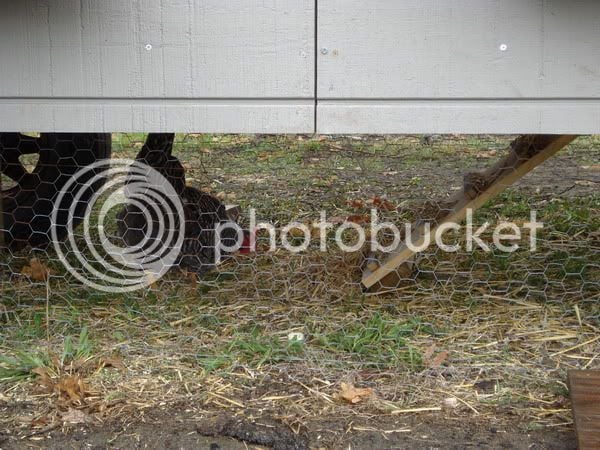 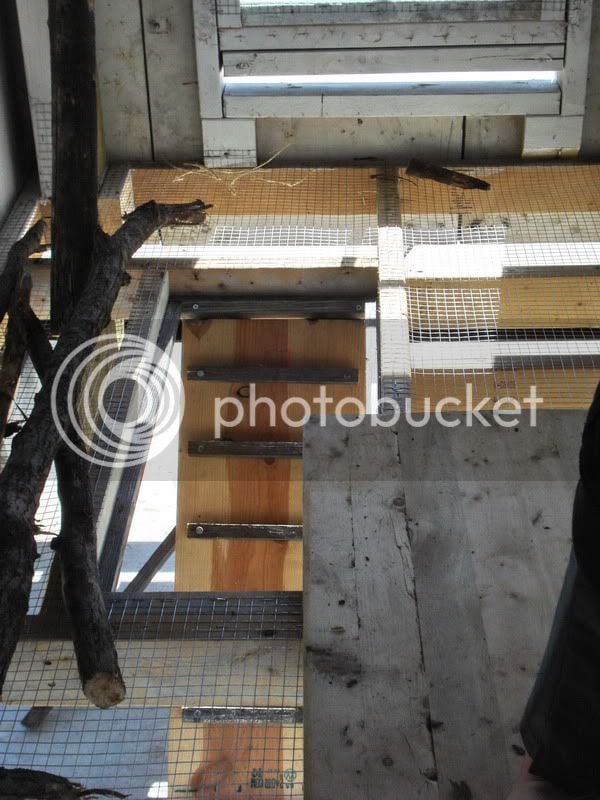 We have a small coop as well. I didn't want to waste floor space with a nest box or door.....so I put a door in the back for the chickens and kind of enclosed a little chicken stairwell for them to come down into the mini-run. 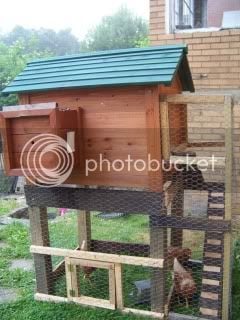 I have a cover that will go over the stairwell for the winter to keep breezes out, and the coop will sit where it is now....in a corner protected by our house. 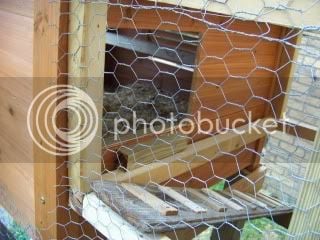 For the nest box we simply put a box on the side. Ours is a 12 in square flowerbox from Lowes because we aren't the greatest builders but you could easily build one with old plywood...even do the hinged top for easy egg retrieval. I have that big access door so we didn't do that..I'm using a dishpan in there for easy pull out and cleaning. 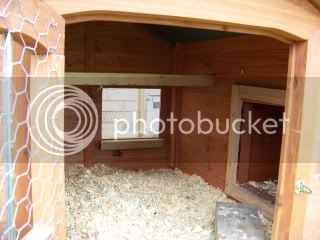 Ours are mostly free range. I'm a stay at home mom, and when I'm home, they are out in our fenced yard. So a small coop works for us. How many chickens are you thinking of keeping?

Also, we used chicken wire since we live in town and have a fenced yard....not much risk of predators. If you live out, be sure to use something more sturdy like hardware cloth.