We are testing the waters!! Freda regularly goes broody and stays that way unless we break her (once for 5 wks!). Well, this spring she went broody before we were ready plus it was just soooo cold. She's been broody for 4 wks now & TCS begins their "Chick Days" Today.

I made up a separate place for her yesterday to see if she'd still sit so we could get her a few babies. She settled in well last night and is sitting as I write even though I was crawling around under her space setting up lamps etc. Here she is awating her babies! 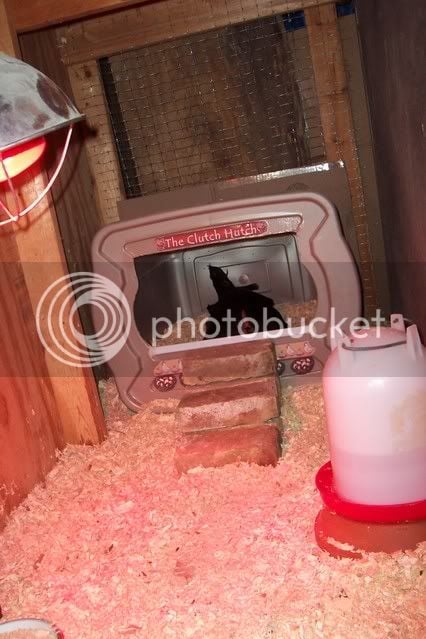 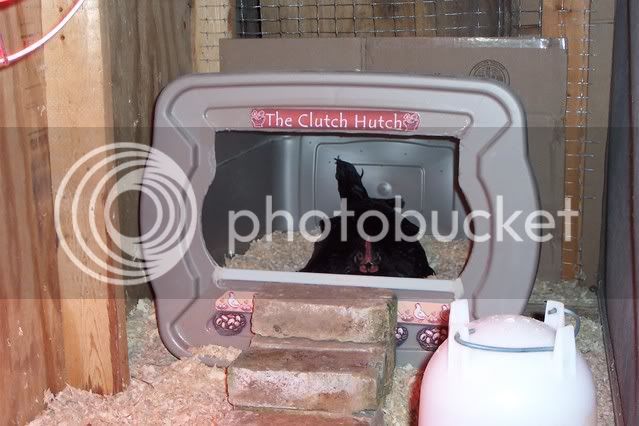 We are so excited to see if she will adopt. I have the lamp up high to take the pic's but have lowered & will check the temp shortly. We will set up our indoor brooder incase she doesn't adopt. We are hoping to get 2-3 Barred rock peeps . They will look enough like her that we hope that helps in her accepting them. Pray that she loves them!!!!

Thanks! I will get pic's of them together if all goes well.

That is just the neatest nest box! Love it! I am sure she will adopt them!

I brought some home to a broody OEGB and when she heard them she jumped up on the chick box they were in with a "those are mine" attitude!

I hope that they adapt well. By the way you should have more hotels. The Clutch Hutch deserves 5 stars.

That is the coolest next box. Where did you get it?
I wish I had a hen to go broody, nobody wants to around here, to busy free ranging!
K

Oh wait! Is that a trash can with the lid cut out?? so cool.
k

I love the clutch hutch!

Thanks for all the nice comments on the "The Clutch Hutch" . It is a plactic bin turned on it's side with the top attatched and cut out. I balanced it by nailing two long thin pieces of wood front and back and drilled some vent holes on top and back. I smoothed the edges of the front hole down and glued a piece of old curtain rod to the bottom edge so it would have a smoother/rounder edge for the girls feet. Printed out some clip art for the designs, printed to sticker paper then sealed it with clear craft varnish. Some of my girls like their nesting boxes large and I thought it would be a good size for a good size hatch.

I just stopped by our TSC and they've pretty much sold out of chicks already! They said they sold 150 chicks in the first 2 hrs. this morning!
Well, they have a few RIR's left and that's about it. My DH said we could go over to the next town this eve (after we close the shop) and see if they have any. Poor Freida! I hope we can get her some babies this weekend.

Well Keeper that was a clever idea. I hope you get her some peeps soon. I bet she won't know what breed they are, just get her some.

Update! Boy, those chicks at the local TSC went fast! Called a neighboring farm store and their chicks were already 4-5 days old, went back to our local TSC this eve and all the chicks were gone. They said they wouldn't have anymore in till next Friday.

So had them call another neighboring town and they had some chicks so hustled on over. Had a coupon, if I bought six or more chicks I could get a free 1gal. waterer. Well, I couldn't pass that up

! We picked up 4 BR's and 3, we think, Gold Sexlink.
The coolest part was putting those little peeps in with Freda. It was sooooo sweet. I place the box next to me and just placed one peep up next to her breast. Held my hand over it for a minute so she wouldn't poke it. It sat there for just a minute then just vanished under her. She looked a little startled for a moment but settled so I thought "cool" and took the fake eggs out from under her then placed the next one next to her and just gently pushed it up under her a bit until it got the idea & went all the way under. Repeated until all peeps were under her. They all started peeping away under her and Freda, bless her heart, started sweet talking quietly to them and they hushed. I checked on them about 1 hr. later and Freda had shifted around a bit but all was quiet.

I will check on them in the morning and hope to get some pictures of them all together. I really am hoping all continues as sweetly as it did this eve and that they all thrive.

Oh that is so sweet!

Should I candle if not sure how long broody has been on eggs?

Will my OEGB rooster ever let her set?
2

Wanting to hatch chicks with a broody
2 3 4

B
Moving Momma and Baby