What Kind of comb is this? Genetics?

I've seen this now and then in photos and have been wondering about it....

In haTHOR's auction listing here: https://www.backyardchickens.com/forum/viewtopic.php?id=461476
you can see a chicken with a comb that looks like a single, but without any points.... Is there a name for this? What causes it genetically? 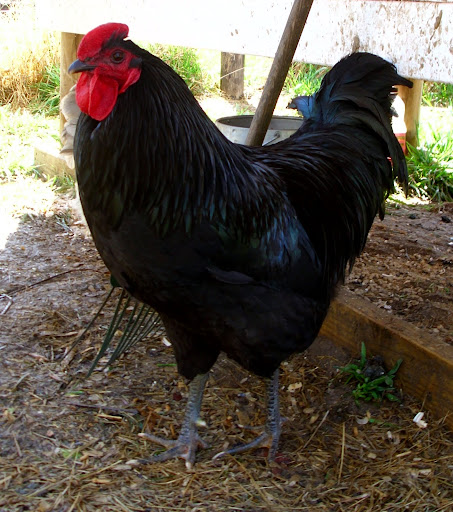 It's just a dubbed single comb. Often people dub (clip) single combs to prevent frostbite, injury, or to show their birds. (some breeds like Old English require dubbing to be shown)

I had a bird who had a very similar comb occur (no dubbing) with a combination of pea and single comb. Here is a photo of him: Quote:
Oh yes, I should have clarified, sorry. I know many such examples are from dubbing, but I've seen / heard of cases where they just hatched that way- presumably genetic. The next post after yours actually someone posted an example of what I was looking for

Quote:
Thanks Sonoran Silkies, that's the kind of comb I'm talking about!

Does this always tend to happen when pea and SC are combined, or do you think your bird's comb was more of a fluke? I kinda rather like it, and if it is possible to select for, would like to do so in one of my lines, just for fun- especially on a very sleek game kind of bird... those birds seem so reptilian almost, and this kind of crest reminds me of a dinosaur crest...

Single and pea comb genes can combine and give several different appearances; probably the weirdest is what looks like a double single comb--starts in the front as a single comb, then rapidly splits out into two sawteeth blades that form a V when looked at from above.

As for Cocky Locky's, I know I have one of his sons (most precocious rooster I've ever had or known of--he started crowing at 2 WEEKS!), but I don't recall his comb type. Lost Cocky Locky over the winter--he was a very tiny little guy. His son is equally small, and pretty odd looking--very hard, short silkie feathering. You have to look close to realize he is silkied. I have a little black girl with nearly as hard and definitely short silkie feathering. One thing I can say, on him you can sure see the patterns.

Single comb that has been frozen will also look like that.