What predator am I dealing with?

Hi everyone.
So this morning I went out to let out my flock of 10 ducks, 7 Cayuga females and 3 Khaki Campbell drakes. And all I found was carnage.
Something had gotten into the pen, and murdered all of them, or wounded them so severely that I had to put them down.
None of them were truly eaten. They all had their backs clawed up, feathers removed and torn open. Most had their necks broken, torn up, or both. Feathers were everywhere.
There were no tracks, as far as I can tell.
One of my drakes and one of my ducks were still alive. Both torn up, his neck broken and her back legs.
My main question is: what animal would attack and kill an entire flock without eating anything?

I’d guess the attack happened around 10:30-11:30 last night, because I was busy moving equipment with my husband in our front yard, and had just put them into their run. I feed them at night, in their run, and then they go inside their house, which has so far been predator proof.
The predator did not go inside the house. They were all killed in their run, and there’s no signs of anything having gone in the house. It looks to me like my ducks were surprised by the killer, and none of them managed to make it into their house.

My dog has previously alerted us to problems, and has protected the flock, but she either didn’t know of the predator, or was somewhere that she couldn’t help last night. Which is why I think it happened just after they were let into their run. They hadn’t finished all their food, which is unusual. All my females were laying, so they have been quick to eat all their food and treats at night, before heading into the house for bedtime.
And, I had all my windows open last night. In the past, when we’ve had a problem, I’ve heard the ducks and gone out with the dog and a weapon. But I didn’t hear anything last night. Which also makes me think it was right after they were put in.

I live in rural Eastern Idaho, so I’ve had problems before with coyotes, and with hawks and a particularly determined Great Horned Owl. But I’ve never had my animals just... killed and left before. Does anyone have any idea what I’m looking for, so I can remove the problem before I get new birds?

Also, I will be modifying their run and their house before getting new animals. I just want to know what I’m dealing with in terms of predator, for now.

Mass carnage and few eaten makes me think dogs or coyotes. I'm sorry for your loss

I would expect a dog.

So sorry for you, Kari. Nothing more heartbreaking than to find your flock like this.

This sounds to me like either domestic dog, or weasel. Either one will kill, and then not eat their victims. Weasels can be problematic, as they can squeeze through extremely small gaps in fencing. Narrow hardware cloth will keep them out, but anything else they can get through.

Dogs can be the worst, though. When I was a young kid my parents lost our flock of Pekin Ducks to just one dog. It killed every one, but ate none of them. So in your case it could be either one. Both are clever, patient, and persistant.

After I had predator loss a few years back, I mounted motion activated lights, and trail cameras around my coops and run. Light helps discourage many of the predators, and cameras will let you know what is coming around, and what time. The predators are like human crooks - they case your place for a while, before they strike.

My first suggestion would be to put up a camera because it will be back and has probably been lurking and then you will most likely find out what you're dealing with. One night a bobcat killed 14 birds. It didn't eat them just killed them. I set traps. It didn't come back the next night but did the following night. It shouldn't have come back. Good luck...

Thank you all.
It was devastating because my kids were all out with me when we found them. We were headed out to gather eggs and let them out to free range…
I have a friend who is going to help me set up traps this afternoon to see what we can catch.
My worry is that it was a neighbor’s dog… in which case, it may not be back for me to permanently solve the problem. As far as I know, I’ve never had a weasel problem, so I’ll have to look into that and make sure it’s not one of those.
Hopefully the traps will tell us more so I can get to the bottom of things.
There have also been skunks, raccoons, and badgers around some neighbors recently, even though I haven’t previously had problems with any of them, so I guess we’ll just have to see if the killer returns to the scene once we get traps and bait out.

I have electric wires around my coops and pens and nothing has gotten past the hot wires. I realize you have kids but they will learn either to not touch the wires or you can put the electric wires on a timer to go on and off at a certain times. You're lucky you have not lost any birds while free ranging. I have lost some over the years so no longer free range but I have nice large pens for my birds. I love my cameras. Good luck...

I don't know how well your pen is predator proofed. This site may help.
http://www.poultrydvm.com/featured-infographic/tips-for-protecting-poultry-from-predators. I see this one most nights on at least one of the cameras. 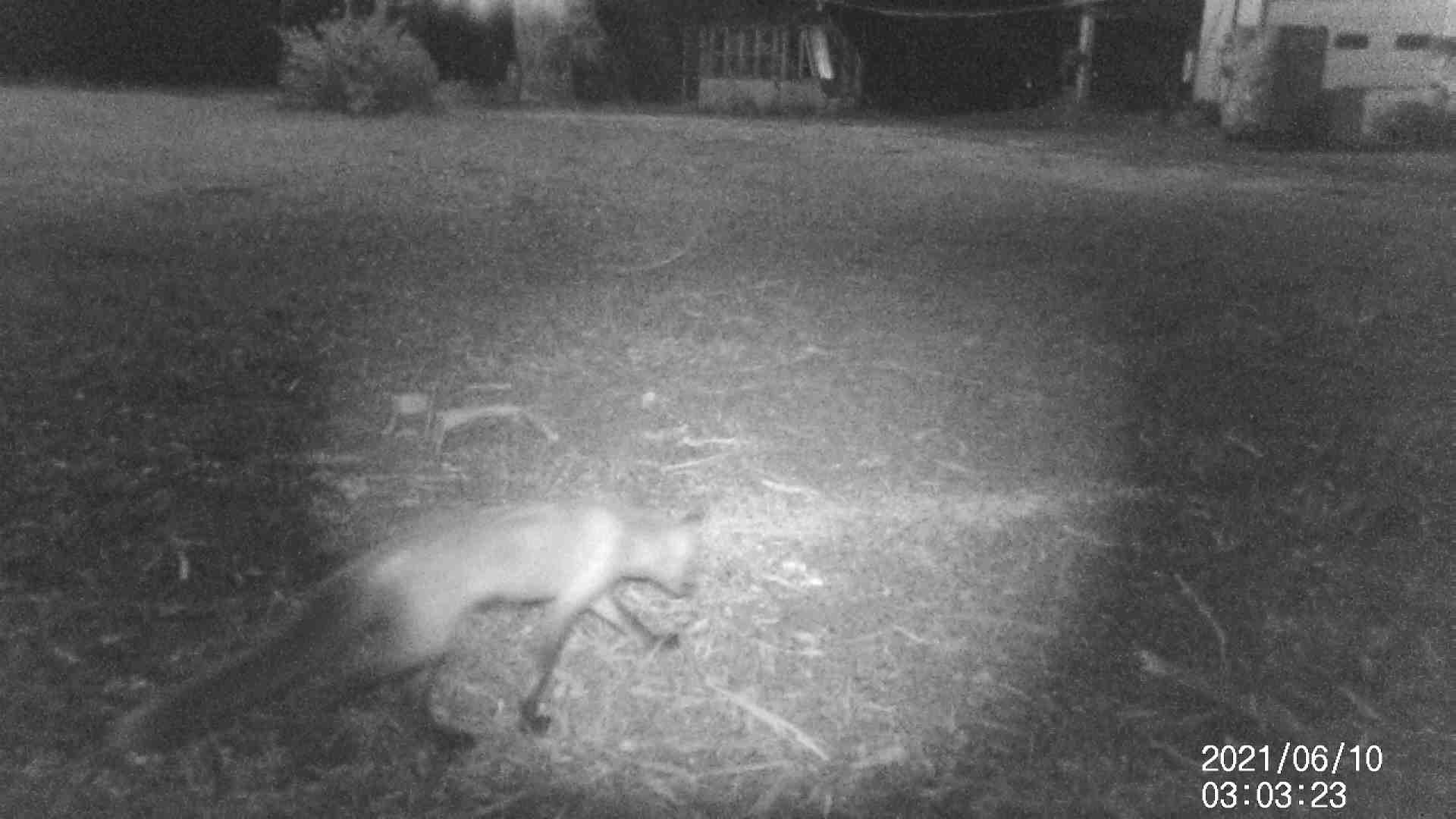 This is a bobcat a few nights ago. 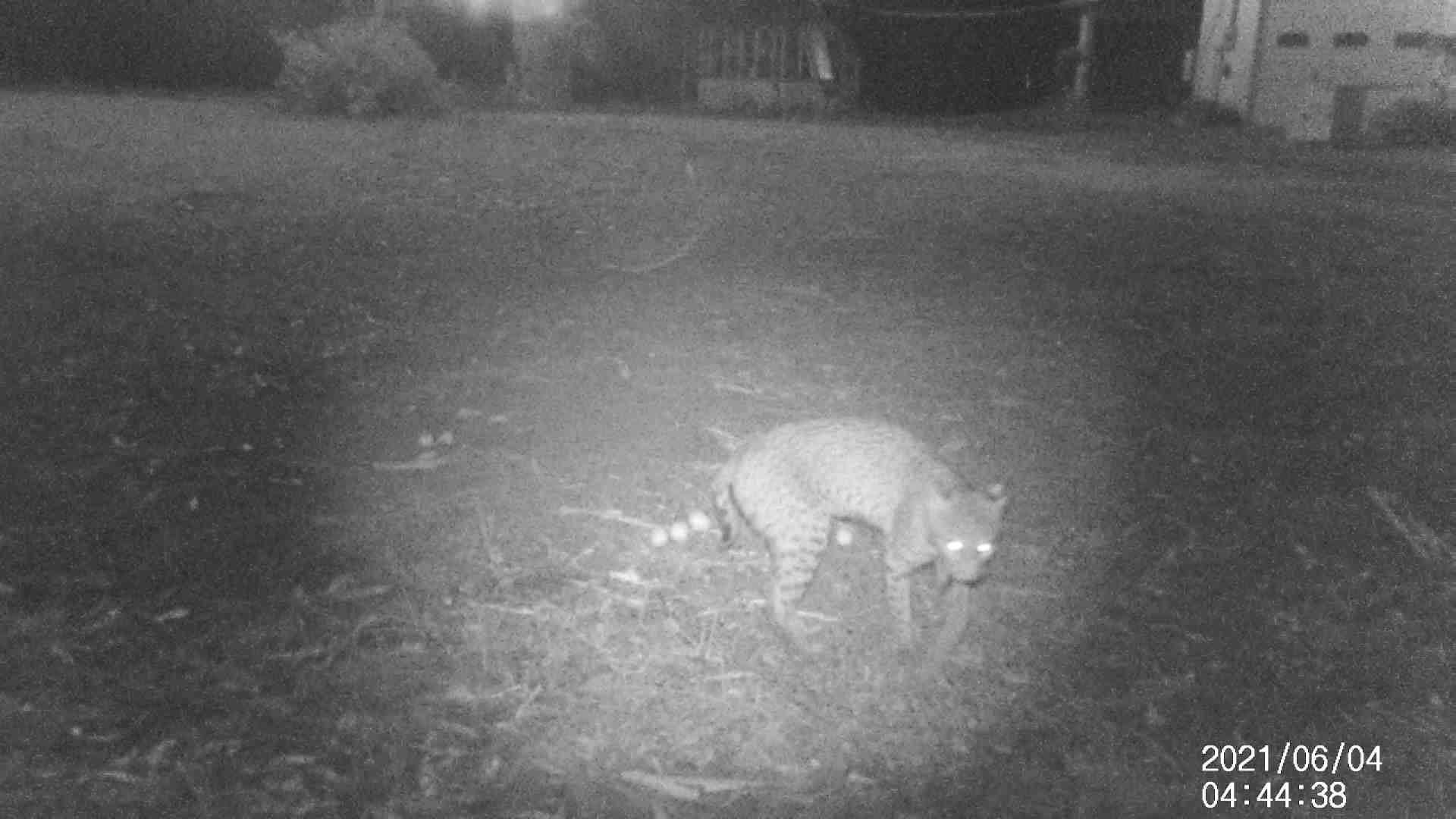 I have been free ranging them during the day in my backyard, along my ditch, and across my lawn. Usually the kids are in the sandbox or on the trampoline, the ducks are 3ish yards away, and the dog is a yard or two from all of them.
I hadn’t gotten cameras or lights because I had a problem with a coyote last summer- killed and ate one, and was removed from the equation- and a great horned owl who got one juvenile, also last summer. So we modified the duck house and run, fortified it better, started taking the dog out at night to pen them up. And I hadn’t had any more problems since.
So I hadn’t gotten cameras. Which will probably change before I get more birds.

The cameras don't have to be too complicated or advanced. TASCO makes a simple 8MP trail camera that is sold at Walmart or on Amazon. At $28.88 it's a bargain, and you can pair it with a 32GB SD card that will only set you back $7.28. I started with wireless IP cameras, then went to more expensive trail cameras that promptly died during the first Tropical depression that came through. Then I settled on the TASCOs, and have used them without a problem for 2 years. The TASCO is simple, but bulletproof, due to the sealed one piece chassis design. The battery life is 6 months, shutter speed is 1 second, and recovery time of 5 seconds prevents multiple photos of the same image. Quality is HD. Many of the local hunters love them, due to simplicity, and the price. If it breaks, gets lost, or gets stolen, then you aren't out $100 dollars or more. They are also great in the coop if something is going on at night that you want to figure out. Come with a strap to hang them, which makes it easy to relocate them to different areas.

You do have to wade through the photos in the morning, but you get good at clicking quickly through them.

Strange losses to a predator
2

What predator am I dealing with?