why are my aracauna eggs beige?

I don't mean that to sound like a smart aleck but...I think that is the issue

they are not pure bred

Did someone sell you some pure bred aracauna's ? They really gave you easter egg chickens which is a cross and egg colors vary from bird to bird. Hope you didn't pay too much...

did the birds come from a breeder or a hatchery?

Here are some eggs I get. Hard to tell but some are a beautiful sky blue into varying shades of green to brown. The hen that lays the blue eggs is brown with gold flecks. No muff, beard and does has tail feathers. Dadsgirl, if the birds have fluffy muffs and beards, and have tails, they are EEs, not Aracaunas. And the egg color... definitely off. Sorry.

Araucanas are rumpless and have ear tuffs (muffs and tuffs are different) they also can be banties
Americana The Ameraucana should also lay blue eggs, but unlike the Araucana it has a tail and possesses muffs and a beard, which are quite different from the tufts of the Araucana, and no feather crest. Muffs and beards are fluffy poofs that grow on the cheeks and chin of the bird, whereas tufts are actual feathers that grow from fleshy lobes called peduncles on either side of the birds' face. Tufts are associated with a lethal gene, which makes them difficult to attain.

The Easter Egg Chicken is not an actual breed; the term refers to any bird that lays colored eggs. The vast majority of birds sold as "Araucanas" or "Ameraucanas" are actually neither. Instead, they are mixed breeds with no APA (American Poultry Association) Standard that lay colored eggs, ranging from bluish and greenish to pinkish-brown, and sometimes even tan, gray or white.

Most that come from the hatcherys are EEs

Quote:Well said. I always have a hard time explaining that. 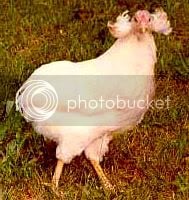