Rather than discuss the wild hogs in the genetics thread, I'm moving it here along with some pictures. (no April fooling). 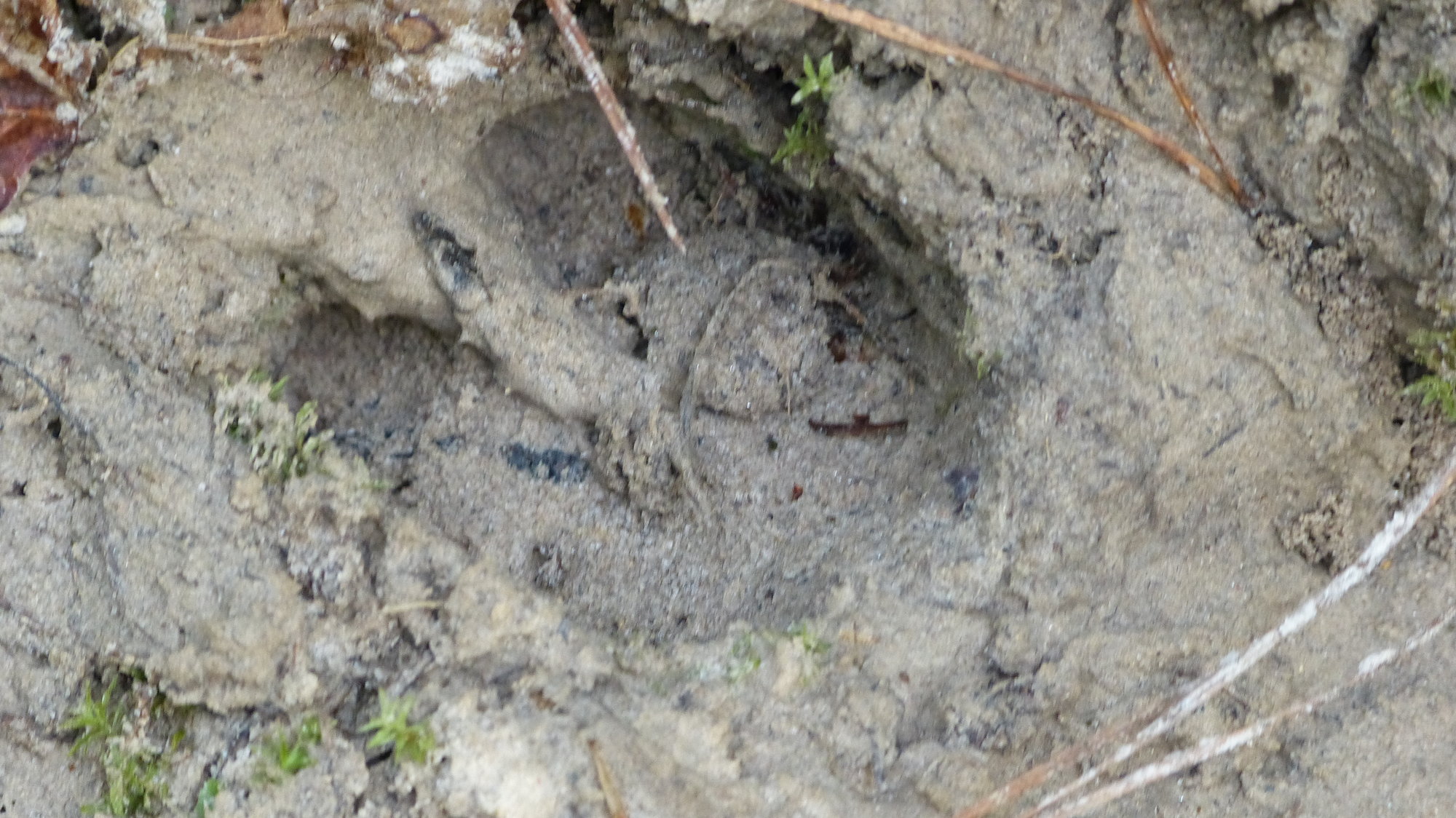 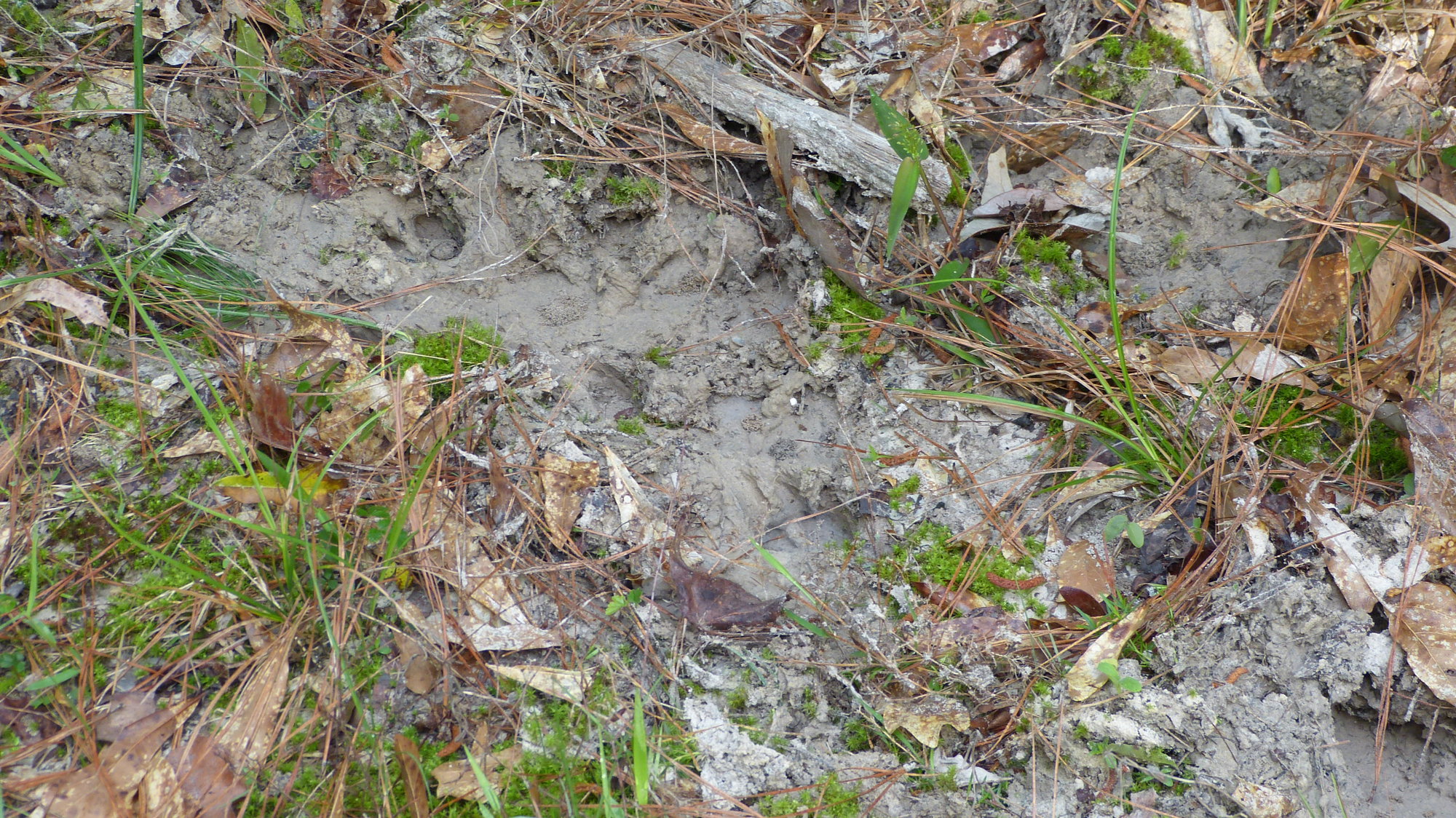 Here's that hoof print in the rooting hole that the hog dug up just last NIGHT! See it in the upper left quadrant? 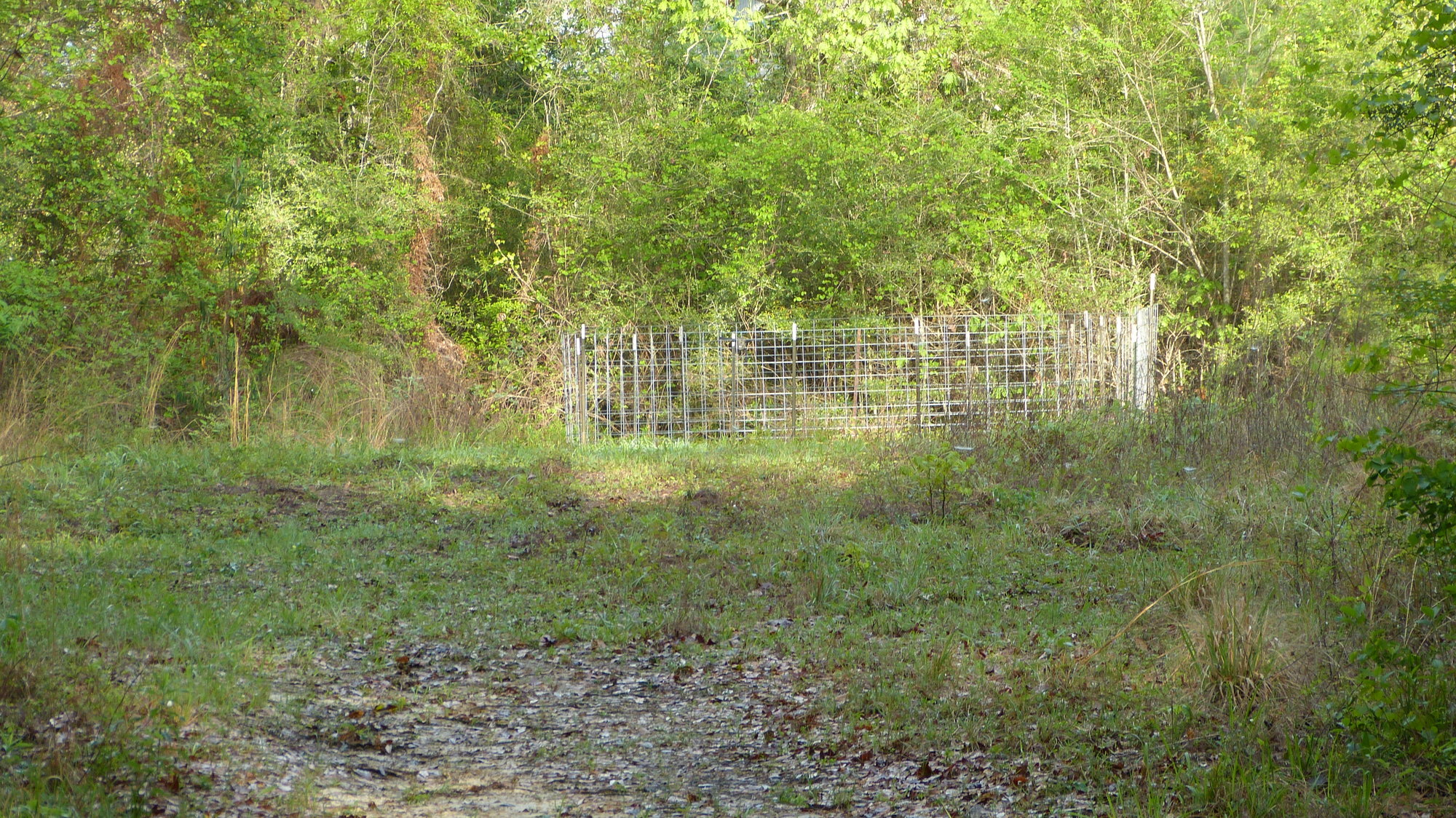 Here's the trap in a clearing in the woods, made of T-posts and cattle panels. In the center is a pile of corn. This is the first time I have seen the trappers 'set' it. It is shaped like a 6 -- and the hogs can push IN but pushing out isn't do-able in theory. His idea is that the hogs got comfortable going in and out to get corn and apples, and now they will just push in since the opening has been shut. The foreground of this picture is dug up by hogs. 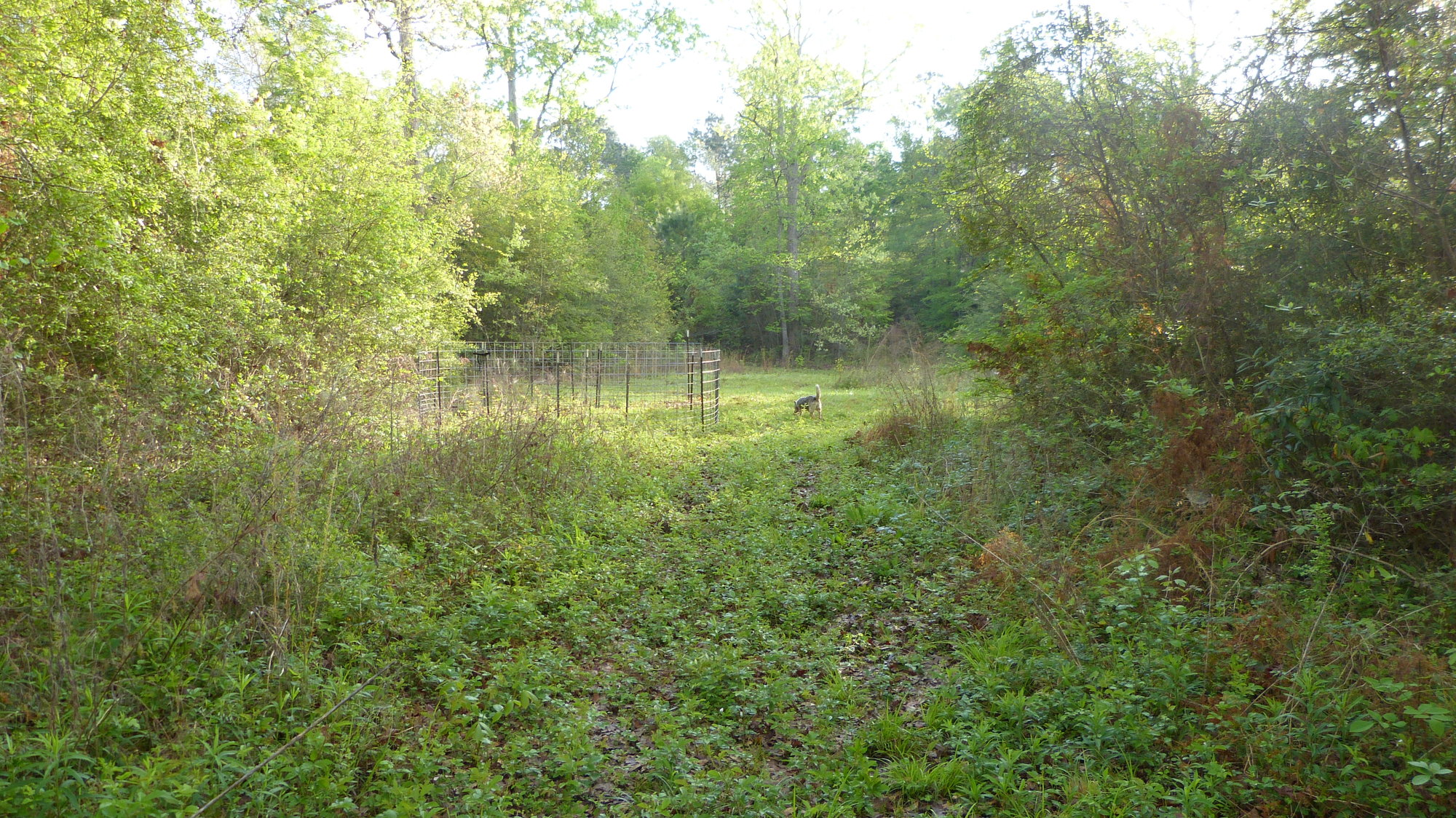 Here's a view from the other side of the clearing..my little dog is nosing around some of the scents that the trapper has left -- she's about 45-pounds, so you can get an idea of the scale. I'd say that the trap is 15-25 feet across. 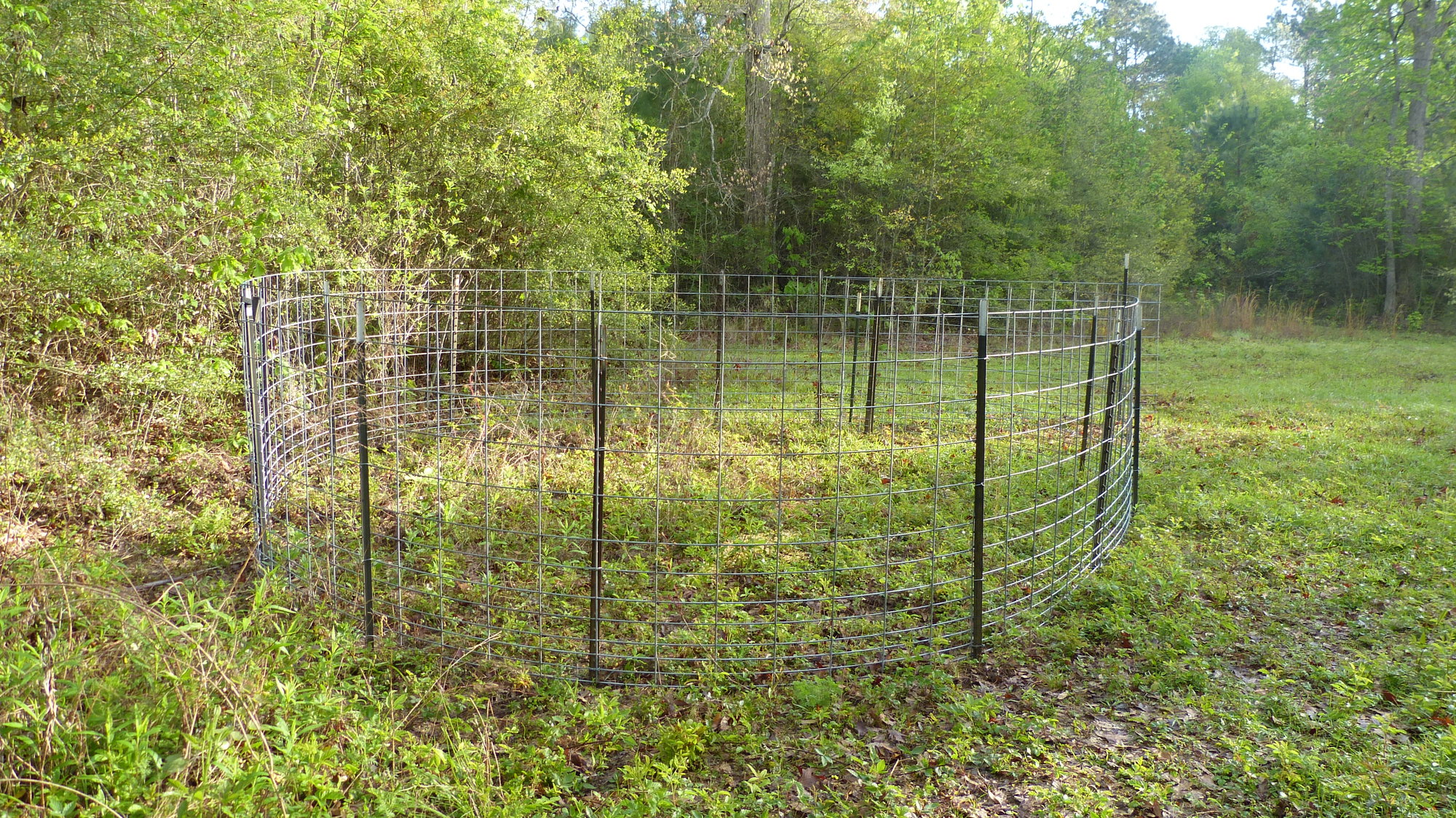 Side view, up close and personal. You can see the game cam he has in. If hogs are caught in a tight trap like a box, it's difficult to get them to go in. If a pen like this one is built, and it is a square -- they will bunch up in a corner and some will hop out on the backs of others. In a circle pen like this, they can't bunch up....they can just go around and around and around. 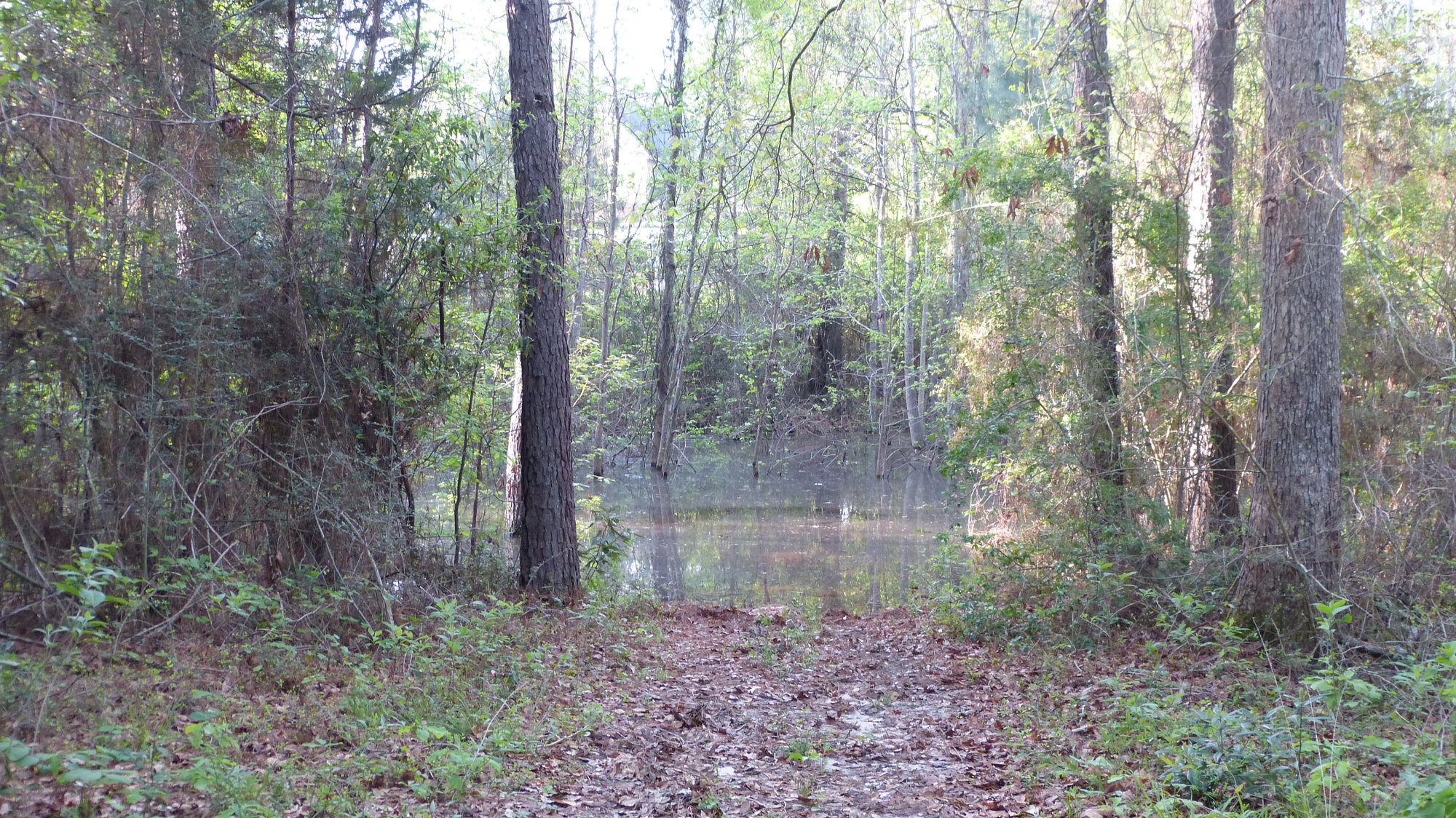 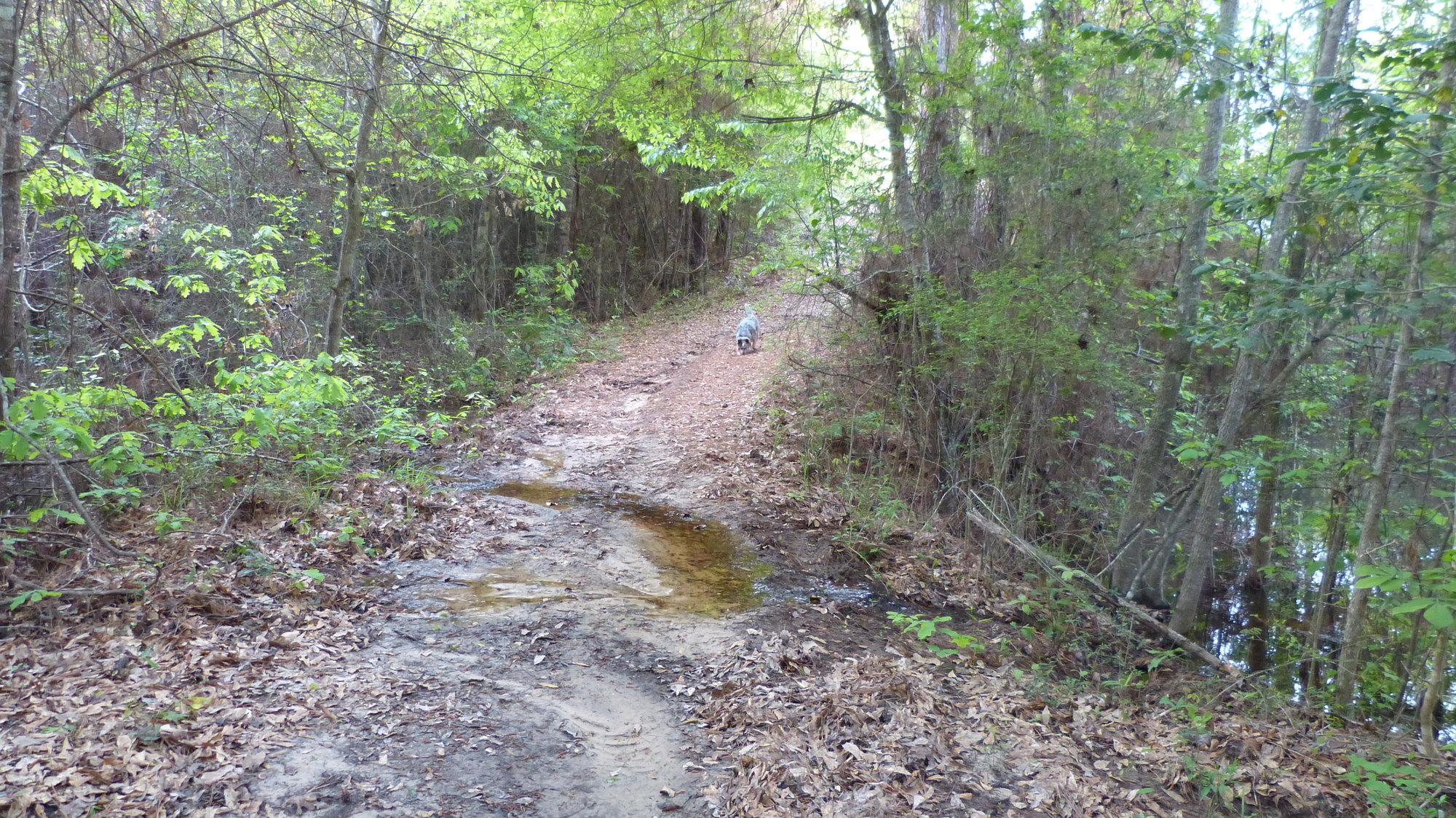 That dark patch is water running across my dirt road in the woods...there is a pond on both sides. Where you see blue on the lower right - that's the sky reflected in water. Oh yeah and my little doggie -- her 10th birthday was yesterday. Here she is besde a trough dug out last night -- 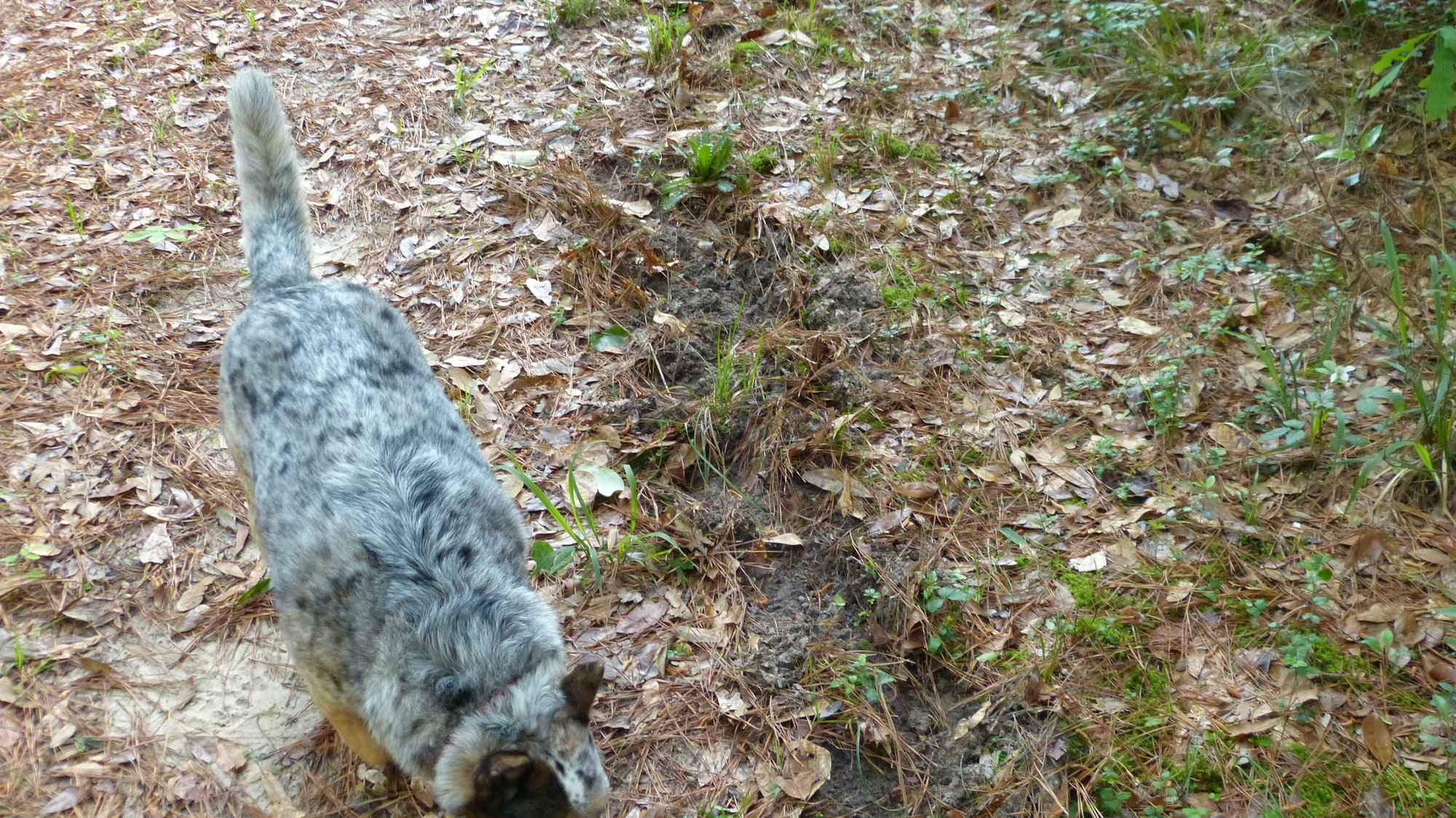 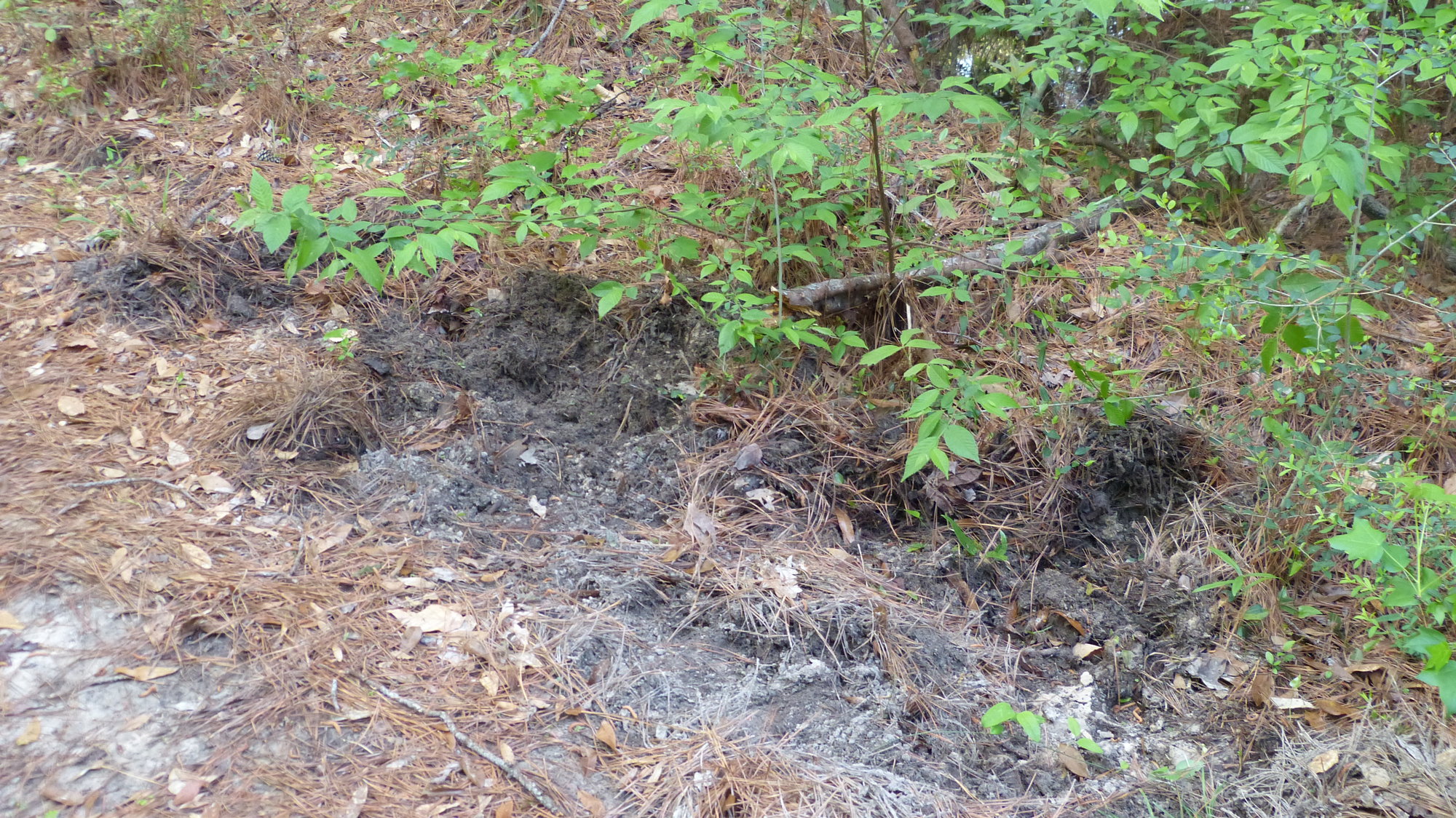 I have more shots, but you get the idea. Night after night they are out there tearing things up. So I hope that the trapper is successful.

Are they good to eat? Hmmm -- Some trappers sell the hogs to processors that supply gourmet restaurants in Chicago. Heard on the radio once, for a show about random weird laws, that it is illegal to sell a male boar (not wild, domestic) -- if they have that 'off' flavor. Whatever that is, it is very distinctive, it only comes out after the meat is cooked, and it is so off putting that hog farmers would go out of business. Oon the ranch -- one that was shot was covered in lice and fleas and was something that you wouldn't even want to get close to. pure UGH! (but a lot of wild game I've heard has things like worm loads etc. that domestic animals don't have. ) All that being said -- it is considered a delicacy -- and the condition and age and gender of the animal could all be factors.

Well thanks for letting me rant. All this standing water is seasonal. The water that lasts the longest is the little pond that the run off across the road was running into. It's the "mosquito hatchery" -- and the mosquitos are blood thirsty. There is a new mosquito pellet out - that treats the water by the way, it is smaller than the dunks and more dense -- so easier to throw farther into the body of water. It only kills mosquito larvae and not other wildlife. It also lasts 60 instead of 30 days, and I think covers more square feet of water surface area. Better go out and throw some today because my 60 days is up from the last treatment and the water area has doubled or more.

Right now all the ponds are connected and some segments of the roads are underwater. The ground below the water is so silty that it acts like quick sand...and it takes the months/weeks until the water goes down/dries up to get a vehicle out. (Ask me how I know)
Here's something nice to balance all the "Hog diggins" . 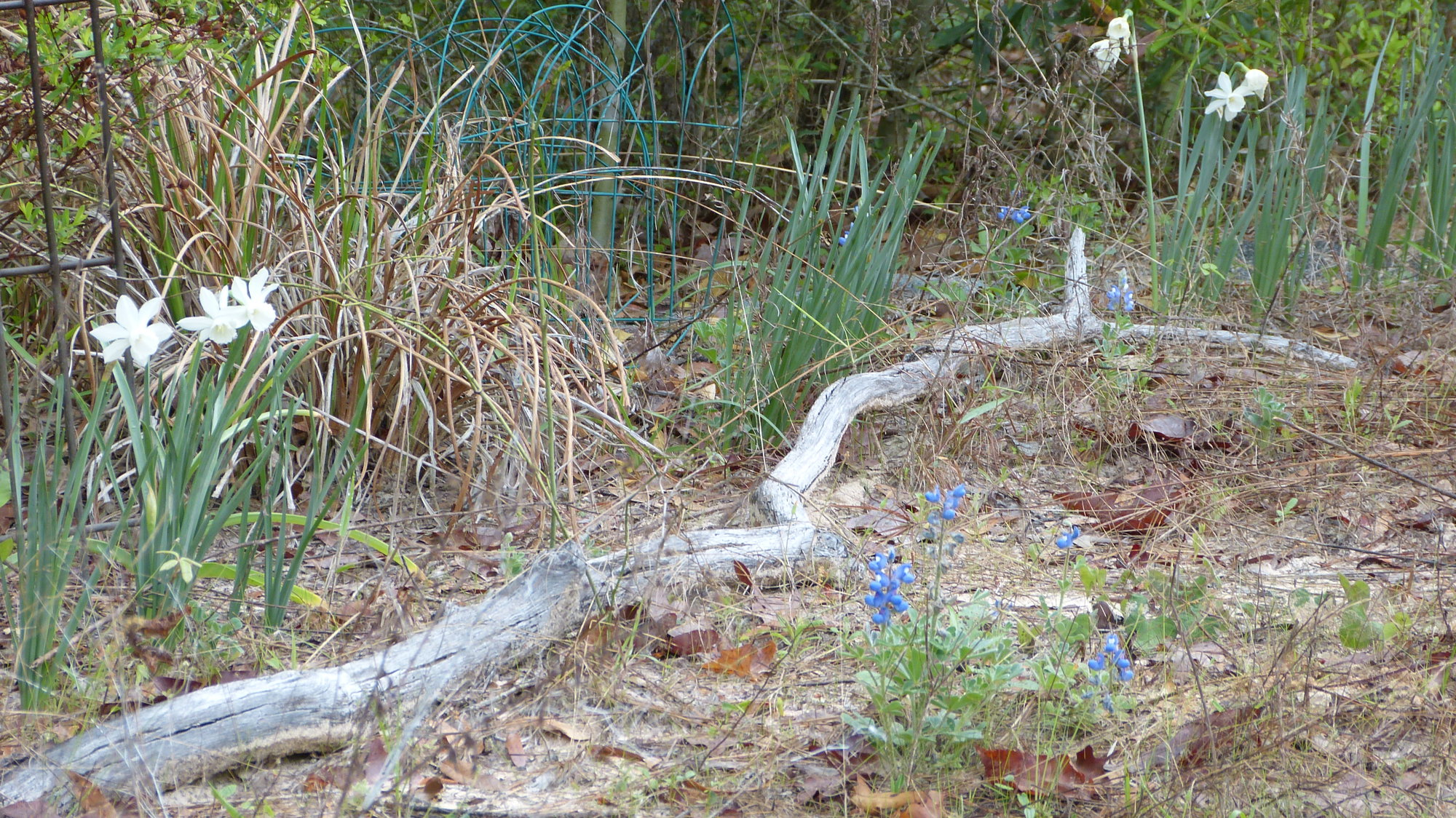 Those what narcussus daffodils and the Bluebonnets. Sparse, but there they are. This is the variety of Bluebonnet that is solid blue. Of all the varieties of Bluebonnets - thisis the one I like the best. Hopefully over the years this will become a serious patch of Bluebonnets, and those daffodils will naturalize. It's nice to see fruits of your labor from years ago.

I hope this trap works!

I can't wait to see the nasty beast caught in it! (Pictures please)

Happy Birthday to your pretty pup!

we don't have as many wild pigs as you guys in Texas have. but we still have quite a few wild pigs around here. (Saskatchewan Canada) have a friend who has shot like 50 of them. he eats them all the time.

they can have a parasite called trichinosis in there meat. this is a nasty parasite that you DO NOT want to get. as far as am concerned treat ever wild hog as if it has trichinosis.

its very common in wild game meat (mostly bear, wild hogs and the deer family) and from the research i have read it seems to die at 137F but it is recommended that you cook your wild meat to 160F for at least 3 minutes once it reaches that temperature.

Revamping run, in need of ideas
2

Do I need to invest in goose x-ing signs?