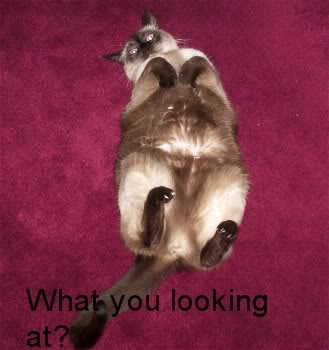 Thanks for Visiting Our Page
My name is Melissa I live about 10 miles from Monticello which is in Eastern Iowa halfway between Cedar Rapids and Dubuque. I work at a Christian Daycare center and have worked in the Childcare field since 2002. My DH Scott and I have been together since March 2005 and though we started with a couple cats we have at the moment over 30 chickens of various ages and types, 11 ducks, 8 guineas, 4 rabbits, 3 cats and two dogs!
So I wanted to show some pictures of all our pets and give back a little of the information all the wonderful people of BYC have given me. Without this site I don't know where I would be.​
We will start with the dogs. This is Leilani (Lani for short). We got her from the Cedar Rapids Dog pound in August of 2005 she was 8 months old at the time. She is a German Shepherd, Chow chow, Husky, Lab mix. The all American Mutt! She is a wonderful dog and though when we first got the chickens she would carry them around in her mouth she no longer bothers them and will even let them lay next to her. As long as they don't bother her food!

​
Our second dog is a black Lab named Apollo. He is the same age as Lani to within a few months. He is a wonderful guard dog and always lets us know if something is going on outside. He keeps the chickens safe and chases off the coyotes while Lani hides in her dog house.

​
Now on to the 3 cats. We have 1 outside cat and 2 inside cats. Outside we have Rommie, short for Andromeda (we love sci-fi) she was born here from Trance (also from Andromeda) who we found another home for. She is a long haired small gray cat.
Our Inside Cats are Tigan and Motley James. Tigan is a 1st generation Tonkanese, a cross between a Siamese mom and a Burmese Dad. She was born on the fourth of July 1997 and is starting to show the gray on her mouth and wiskers. She is a wonderful cat and likes to carry toys around the house calling us or Motley. 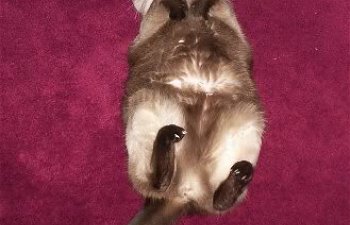 " />
Motley is a Farm cat, we got him on thanksgiving two years ago this year. From Scott's father. He is marked like a tabby point Siamese and thinks he is all that and a bag of chips, as my neice likes to say. He goes outside every night and torments the outside cat. I call him Motley James because he reminds me of a kid from daycare thats middle name is James and he gets called that when he gets in trouble. 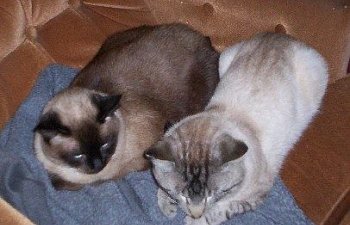 Now on to the Rabbits. When I was a teenager I raised rabbits, but I had not had any for almost 10 years. A few months ago we decided to get a few rabbits. We now have Four. Slim Jim is a Mini-Rex. He is gray with a white belly and chin. Black Sabbith is a Silver Martin, I think. Then we have Princess Pei Pei and Panda two polish bunnies. They where 2 months old when we got them in August of 2009.They are tiny and a lot of fun. We plan to get a polish buck sometime this fall. 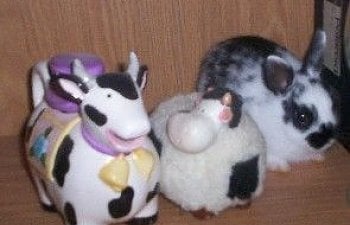 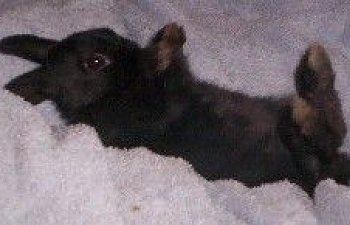 Now the Poultry! We will start with the Guinea's because we have had them the least amount of time. We bought eleven guinea's from a very nice man from the Westbranch area. I would reccomend him and his guineas to anyone. He has many rare colors. We started with four coral blues and three royal purples, two weeks later we went back and got two more coral blues, one more royal purple and one Opaline. We also got some Lavenders for Scotts Dad. I love the guineas. They are just starting to get ugly and making all the guinea noises and we still can't tell if they are boys or girls but they are very cool to have around. We lost three to preditores. I think we just let them out to soon. We will surely have eggs for sale in the spring and may even buy a few more next year. It is hard to get good pictures of them at this age! They are just starting to get the cool blue and purple colors on there chests and would not cooperate with facing the camera! 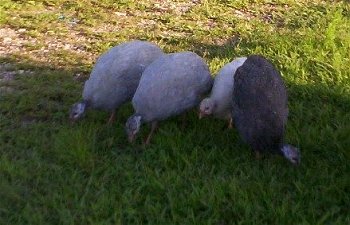 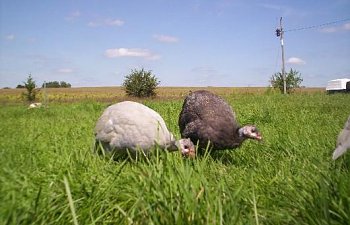 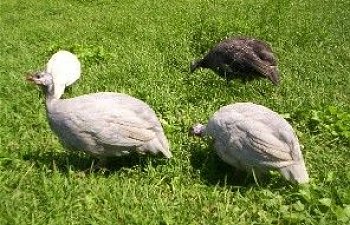 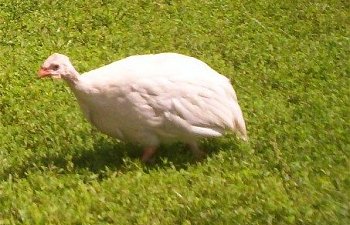 The Ducks! We started with just a few call ducks. This year we were able to hatch out four babies from them. We also hatched a call duck/ Runner Duck cross. Her name is Plucky and she looks pretty much like a call duck, only a little more upright and a larger bill and feet. In July we drove up to Durango IA and picked up four Muscovy ducks. They are so cool. We got a chocolate ripple Pied Drake, we named Elliot, he will catch food in the air when you throw it at him. They are all very friendly. Our ducks are.....Ellen a White muscovy duck, Gypsy a blue/Chocolate ripple muscovy duck,and Piper a Chocolate Pied muscovy duck. Our call drake is named Grendle and for whatever reason we have not named the call hens. They are snowy and he is a grey. 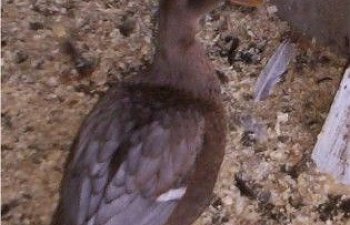 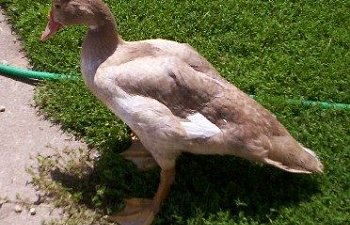 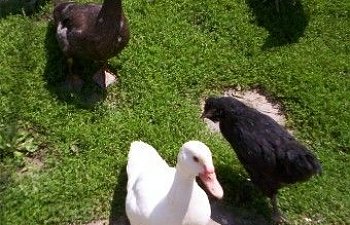 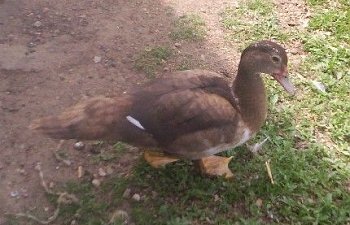 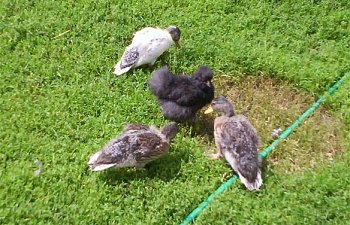 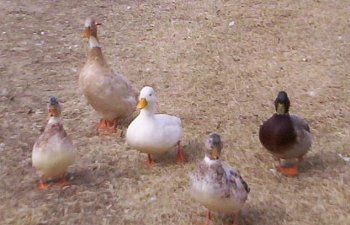 Last but not least the chickens. On May 10th 2006 Scott bought me five hens for my birthday. They where red sex links, gold comets or whatever you want to call them. They where wonderful hens, very friendly and layed well for us. That fall 2006 a friend gave us all her bantam chickens about 15 hens and a rooster. They where Old english Bantams and Sebrights and some mixed ones. As well as seven White silkies. She also gave us two Easter Egger hens. The rooster never did any thing with the hens so in the fall we got a free rooster from one of Scotts dads friends. Within two months we had hatched out 13 more chicks! Silkies make wonderful Incubators! That spring 2007 we bought Scotts dad Barred Rocks for fathersday and got ourselves five too. The following spring of 2008 we ordered the Ornamental Layer Collection from Murray Mcmurray and although the quality of the birds isn't the greatest we have a nice variety of differn't breeds and now plan to get roosters to match some of the birds. Some of our Favorites are the Cochins, Salmon Faverolles, Crevecours and White faced black Spanish. Though none seem to be great layers, our best layers are the Easter Eggers. They are all friendly and cute birds. We currently have three roosters. Anakin is the top rooster I think. He is a Light Brahma we got with a meat bird special from Mcmurray in the spring of 2008. He was such a nice looking bird I had to keep him. He makes big babies and is a gentle boy. The next rooster on the totam pole is Buckbeak, he is a Silver Laced Cochin Rooster and we plan to replace him with a Blue/Black or Splash Cochin rooster this fall or next spring. He is a nice boy as well but not a good looking Cochin I don't think. Our third Rooster is still a baby. We hatched him out spring of 2009. Our first hatch in a incubator. He is a nice looking Rhode Island Red rooster and as long as he stays nice he will get to stay. We have a couple Rhode Island Red hens and plan to breed them next year. I could go on and on about the chickens but I won't. I will just post some pictures of my favorites. Next year we should have Salmon Faverolle, Blue/Black/Splash Cochins, Crevecour (if we can find a rooster) Rhode Island Reds, and Blue/Black/Splash Silkies and White Silkies available next year, chicks and hatching eggs. If interested contact me in the spring of 2010. 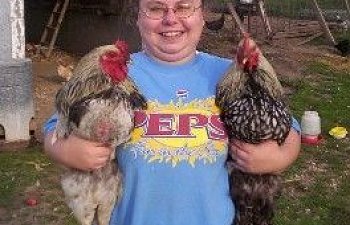 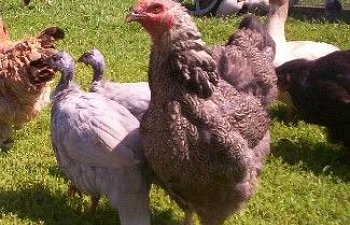