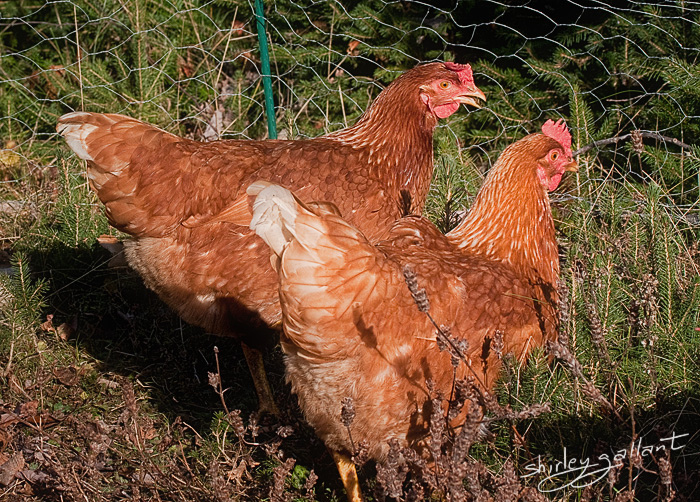 Just Getting Started.
I retired in May this year, 2009, and decided to try out a new hobby. Chickens.
This may be a slow work in progress because I have little to no experience with construction and I'm pretty much on my own to do it.
I started out with a pen that I used to use for Buddy, the dog.
The perimeter of the pen was filled with cement down about 8 inches because I thought he would be a digger.
He turned out to be such a good boy that I didn't even have to use the pen. He stays right in the yard.

This is the beginning of the project. Early July, 2009.

The original dog pen with the dog house removed. (looking south)
The ground is covered with a very fine gravel and grass is starting to grow in around the edges.

A couple of posts added.
I think I got them straight.

Some extra strapping up top.
Lucky for me, those taller posts had never been cut off like they were supposed to be.

Some chicken wire and more strapping.

I think Buddy is having second thoughts about this.
And so am I considering I'm just wingin' it.

I put vinyl on the floor and partway up one wall where the roost will be.
The roof and the front wall are now on.
I used screws to put the wall on because I make lots of mistakes and I'm useless at removing nails.

From the side. You can see how close it is to the house. The steps lead to my deck.

The west wall with the pop door and vent has been added and the nest box is now built.

The roost is built and I . It was getting too institutional looking.painted some colour into the coop
The roost can also sit on the south wall next to the window.

Window on the south wall is plexi glass. (I will remove the blue covering during the opening ceremony.)

A shot of the whole area. The building next to it is a wood/garden shed.

Some final touches.
I think it looks like the Purina Chicken House.

This is Easy
And one White Plymouth Rock

This is Stu. (I thought she might be a rooster when I named her)

The tarp is working quite well. Protects me and the chickens.

We have lots of snow this year. That's an 8 foot post in the foreground.
The chickens seem quite content with their little snow fort.

I do have to shovel off the roof once in a while but it's holding up pretty good.
Buddy still thinks I'm out of my mind.

SPRING OF 2011
Stu has been broody lately and not laying so I've decided to stick a few fertile eggs under her. Five, to be exact. I only want maybe two or three more laying hens so 5 eggs should do it.
I had no desire to raise chicks in an incubator in the house so I figured she could raise her own darn chicks.
She's sitting happy on them but Over and Easy crawl in on top of her all the time and lay eggs on her head. Now I have 6 eggs and one of them is for sure a dudd.
So I made a few changes to Buddy's old dog house and I'm going to move Stu and her 6 eggs in there.

The move went well but I dropped one of the eggs on the way over with it and I'm now back to 5 eggs with one possible dudd.
Day 12: I noticed one of the eggs has been pecked at. I removed it from the nest. (Not the dudd... yuck) That left 4 eggs.
Day 19: There was another egg that looks pecked at. I removed it and put it in the compost pile.
There was a hole in it and I peeled back some of the shell to see if it was the dudd.
Nope, in fact it occurred to me at that point that perhaps that hole was made by the chick trying to get out. Oops! (There's a reason I'm not a mother)
Down to 3 eggs now.
Day 21: The eggs are supposed to hatch today. Nothing.
Day 22: Nothing
Day 23: Nothing
Day 24: I ran Stu off and took the eggs out of the nest.
Figured I should probably do a float test.
Egg number one... no movement.
Egg number two... no movement.
Egg number three... wiggle, wiggle, wiggle.
I take the egg out of the water and that's when I noticed a little hole in it.
Sheeze, I probably drowned the poor thing.
So I get a box and a light bulb and here I am raising ONE chick in an incubator. 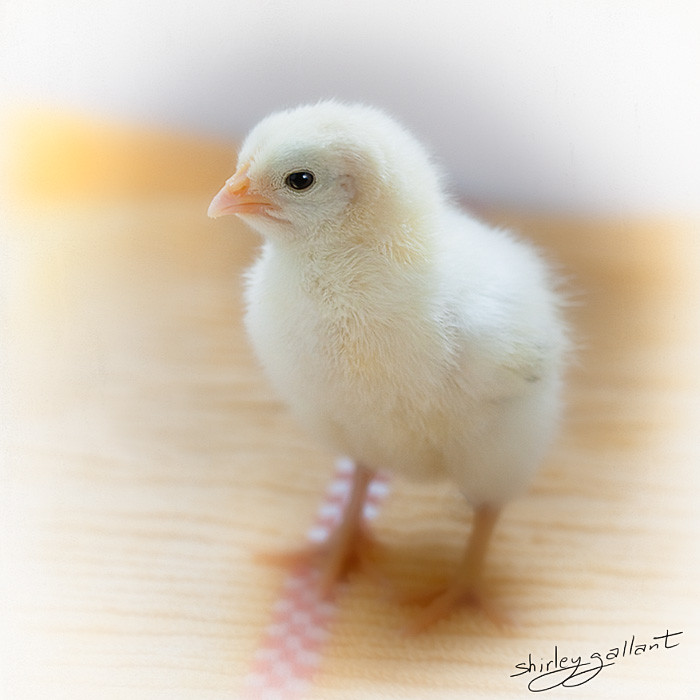 I called her Dumpling.
She's very lonely and cries all the time... Sooooo, another call to the farmer to see if he has a couple of baby chicks he can give me. 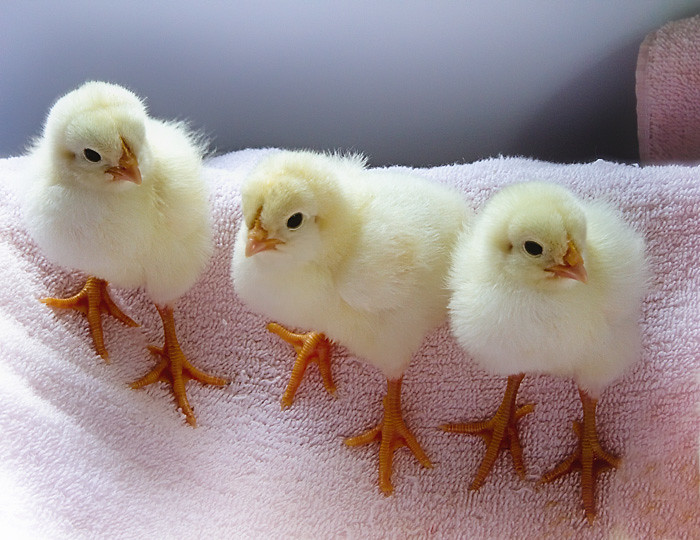 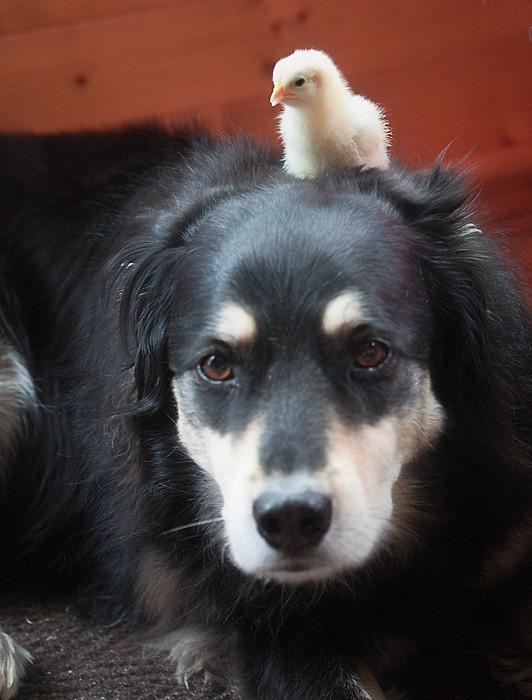 What a good boy!
Things are going along fine for a few weeks. Chicks are growing and they're like little pooping machines.
Easy took sick and died in the mean time. So now I only have the one laying hen... Over. Stu is not laying yet.
I can't wait to get these little ones outside. They're starting feather out and I notice that their feather colours are starting to form.
After investigating for a while it appears that I have 3 roosters and 1 hen.
So in essence, after all that, I'm back to where I started only now I have a few roosters that I need to get rid of.
I've decided to keep Dumpling who is a rooster and Noodle the only hen. Omlet and Buscuit don't know it yet but they've been getting fed a little extra lately for the inevitable... 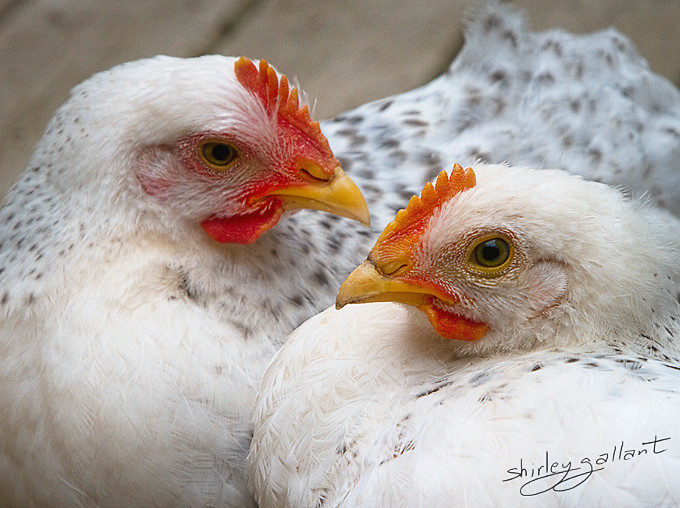 Don't let those extra treats fool y'. She has plan for us, Pal. We need to plan an escape.

Dumpling turned out to be impossible! He crowed all night long outside my bedroom window and we had to find him a new home.
Stu is also in Chicken heaven but Over, Noodle and my two new arrivals are egg laying machines and everyone is getting along great.
Phew... I hope that's it for a while. 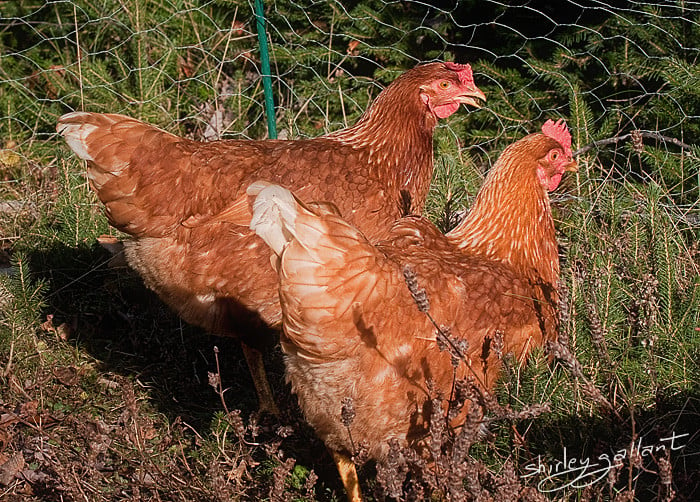 Meet No and Name.

I very much enjoyed the telling of your story. I hope to read more of your adventures in the future. I am just starting out myself. Currently I am drawing plans for a simple coop. I will try to post updates but sometimes I get distracted and forget to document progress.