Article Gallery
Leave a rating
We actually started our chicken keeping adventure in April 2011 when I started buying eggs at the local farmers market. Each carton included some brown and some blue eggs. I was intrigued with the blue eggs especially. Then in May I visited the home of a friend who had chickens. She showed me her chicken coop which was a small barn. In one of the nesting boxes was a beautiful blue egg. She gave it to me - still warm, and I was hooked. I ordered two books about chickens from Amazon.com and started planning.
We took the first major step toward making our dreams a reality on Tuesday, June 7th when we got our chicken coop. We found it on Craigslist - built by a guy in Monteagle, TN. He met us at a gas station with the coop on a trailer. The coop was just what we were looking for and it was good workmanship. The guy also had an extra 6-ft run that we bought so our chickens would have plenty of room. 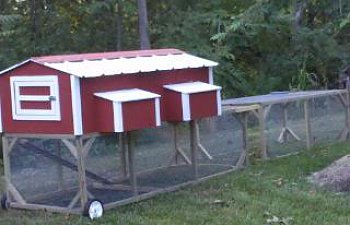 ​
Although I like the chicken coop, we had to make some modifications. We put in a wide door along the bottom of the coop. Then we bought two washing machine drip trays at Home Depot to slide through the door to be the poop catchers under the roosts. We used c-clamps to attach the extra run to the main one, and we put locks on the nest box lids since we wanted to be sure to keep predators out.
I became a fanatic about Craigslist - checking it frequently for chickens for sale. I was impatient and didn't want to start with chicks. I wanted pullets that were at least two or three months old so I wouldn't have to wait so long for eggs! One day I found someone with a farm about 45 minutes away who was selling 4-month old pullets. I checked out their webpage - Wedge Oak Farm in Lebanon, TN. Everything checked out and my husband and I, along with our two oldest granddaughters (ages 8 and 10) drove there on June 14th and got 7 pullets. We loved their farm, and their chickens were so healthy and beautiful. We were very pleased with our purchase.
We had planned on getting only 6 pullets. However, the grandgirls fell in love with a black and white one (an Ancona), and so we got her, too. We got Rosemary (New Hampshire Red), Abby, Annabelle and Ariel (Aracaunas - so they said - they're really Easter Eggers), Blackie (Little Black Giant), Willow (supposedly a Welsummer but turned out to be an Easter Egger) and Oreo (the Ancona). They were all hatched on February 15, 2011. So they were exactly 17 weeks old the day we got them. I wanted a variety of colored eggs, and I should have that - white, brown and blue/green!
And now I keep looking at online catalogs and thinking of getting some chicks later. We don't NEED more chickens, but I definitely have chicken fever. . . but what would I do with more chickens and more eggs?
Here is our little flock - one week after joining our family. We hope to start getting eggs within a few weeks. I'm also looking into getting a livestock guardian dog so that I can let the chickens out of the run to free range sometimes when I'm not right there to keep an eye on them. 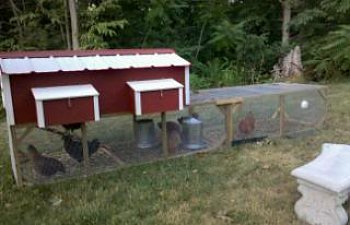 ​
Update: On September 7th we got 8 new chicks: 4 day-old chicks from Meyer Hatchery (1 welsummer, 1 light brown leghorn, and 2 Easter eggers), and 4 Araucanas from a private breeder. The four breeder chicks are all female. The four Araucanas are straight run. We're hoping for at least one pullet from the bunch, and we'd be thrilled with two pullets.
My children gave me an incubator for my birthday. So on September 12th I set the first eggs. I had ordered nine eggs from Meyer Hatchery (2 BR, 2 RIR, 2 Golden Laced Wyandottes and 3 Light Brown Leghorns), I got 4 easter eggers eggs from a private breeder on eBay, and 4 Welsummer eggs (included 3 extras) from another private breeder on eBay. I also got eggs from a local BYC friend - one BR and five NH/RIR mixes. They should start hatching around October 3rd. I set the welsummer eggs two days after the others - so they won't hatch until around October 5th.