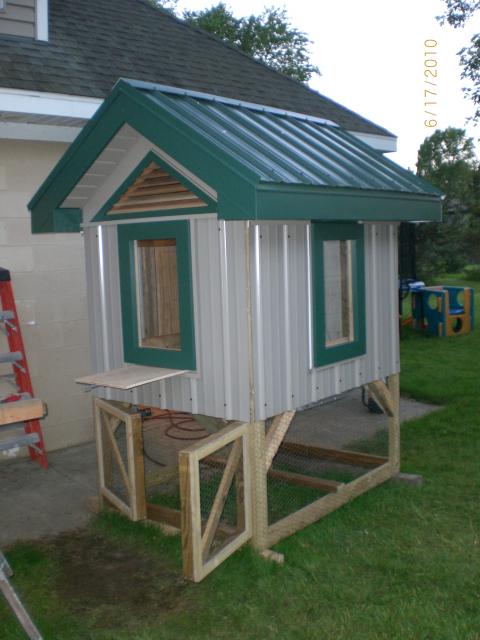 Northern Illinois Chickens
Picked up our first batch of 5 chicks on April 24th 2010.
I am mom of 5 kids, a great husband and now 5 chickies. We live in a small town in Illinois real close to the Wisconsin border. We would like to have a farm. A small chicken flock will get us started though. We have a good size yard and hope to let the girls free range as much as possible so we will see how that goes.
We are still working on the coop. Memorial Day weekend. This is the big project. Need to get the chicks out on their own. They spend time in the yard in the day, back to the little lock up at night. Checked out the site here and got many great ideas that we mixed with our own original plans as we build the coop. We'll share some photos and our coop posted soon. So my hubby thought the slide out drawer would be cool and convenient instead of rigging up some drop in door or something. It sounded like a good idea. I will tell you though, as I am posting this picture finally almost a year later, the chickens poop on the 'drawer' as we call it and when you slide it out you have to slide all the poop off, no big deal it all drops to the bottom we clean under neath. However, when it is very freezing outside, some times the girls do not go out b/c the drawer is has a lump of frozen waste and we cannot slide it out. If it is that cold out though I figure the girls are happy in their abode there. Note the slide out exit way. We planned for the deep litter method. Being in northern Illinois we need to have it fully enclosed in the winter for warmth. We have it set up for a couple heat lamps from the top which we supplied two this past winter to keep the coop warmish. We put some insulation in but the chickens pecked it all out. We will insulate with something else this next year I think. This is under the coop. So we slide out the drawer and the chickens walk down and can stay safe under the coop. Then we have doors to open from under here to let them out and about wich is our intentions... give them the run of the yard. The coop is not in it's final destination though.
October 5th, still waiting on eggs. Viewed youtube to see the signs and listen to the 'egg song'. waiting..... waiting..... waiting......
Okay: October 15th. Spec - our Ameracauna laid her first egg today. So excited. January 29, 2011
Sadly our girls were visited by a Racoon last night. Our own fault. They did not get locked up before dark and that coon came an let himself into the diner. Lost two of our five girls. Rather saddened. I hope my family has learned that keeping care of the hens is a family effort and everyone has to pitch in and be aware of nightfall. We really liked the Buff Orphington... she was pretty cool and our first layer. The other the Barred Rock was attacked. Not a pretty site. Put the girls in early tonight and reinforced the locks. I am sure the coon will be back!

April 7, 2011
Well our three girls are now almost one year old. Our RIR is just starting to really lay I think. Still have not figured her out though. Our orphington is a broody girl. She was broody a couple months ago and has gone broody again! We are considering getting some one day chicks under her to see if she will take them in as her own. So while we investigate this quickly as possible I have discovered mites on one of the girls today. Actually, found them on me! Thought about it and had to check the hens and sure enough! So another little issue we need to take care of. Such as farm living.
So I spent a little time here at the BYC and finally... one year later figured out how to get my pictures posted. Yes it took me that long, not like I worked on it every day though. SO I have updated my photos to to with my story here and will gladly add more in the future here.
Hope you have found something worth your time!

It worth my time o yes!!! Your kids are beautiful God bless, also your chicks are cute...& you guys did a very nice coop! So sad indeed to hear racoons get some of the hens... :O( If you have a big garden maybe you can start litle by little to grow things there & why not to have a lil'cute farm :O) Many Blessings... Judy from PR
ps. check out my coop page when you have time!