Leave a rating
[FONT=arial,helvetica,sans-serif]This is just a short story about how I came to own some chickens.
Someone in my office has a flock of chickens. When I moved to a more rural location here in Iowa, I thought perhaps I would be amused by having a chicken or two. One day, when I was idly surfing the internet, I came across www.omlet.us, which sells the "Eglu" Coop. I puttered around on their site and decided that was the right coop for me. After all, I only wanted a couple of chickens. I knew I could get a chicken from my work friend, so I just got the Eglu without chickens. It arrived and I was so excited. We assembled the coop and it just looked so empty without a chicken in it. So, off we went to pick up the first hen. We selected a partridge rock from my friend's flock, and named her Henny Penny in honor of my mother, since her name is Penny also.
Here's Henny Penny on her first day, coming out of the Eglu coop portion, into the run.[/FONT] 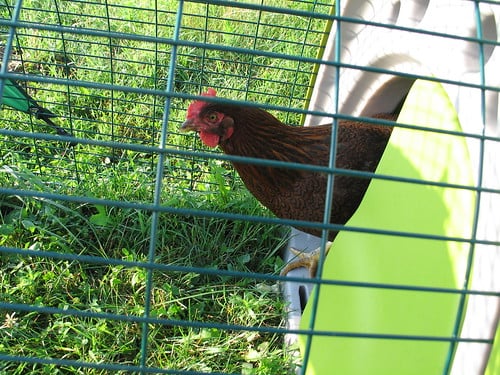 [FONT=arial,helvetica,sans-serif]Soooo, I told one of my other coworkers about my new chicken. "Oh," he said, "I am about to kill all my chickens because I'm moving to Colorado and I can't take them with me, so I figured I would just butcher them and give them to my neighbors for their freezers." Having already become quite attached to Henny Penny, I had to pick my jaw up off the floor before I could respond to him. "Can I have them....but I'd like them alive..." I said. He agreed, and now I am in the process of acquiring his flock of light brahmas, barred rocks, and other mixed farm mutts.
In the meantime, the Iowa State Fair was taking place. Unfortunately (??) I went on the day of the chicken show. Very bad temptations. So that was how I ended up with a trio of Old English Game bantams, in fawn silver duckwing color. Oh, and not to be forgotten, a black bantam Wyandotte. [/FONT] 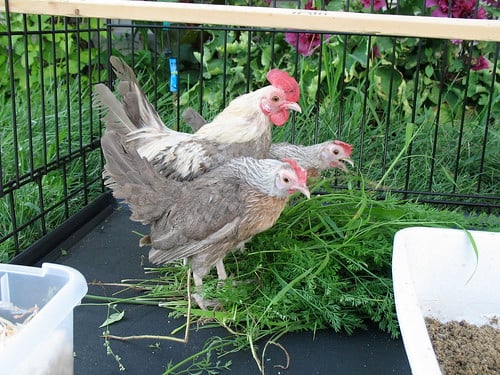 So, to top all this off, one of my colleague's chickens had just hatched babies. I acquired those also. So, 10 chicks became a part of my menagerie! So here I am now, with 4 bantams, 9 standard hens, and 10 chicks. And the flock keeps growing. And I couldn't be happier!