Leave a rating
This is Scratch, the One Who Started It All. It was a boring summer and my husband happened upon a craigslist ad for a hen needing a home. She'd been rescued from the pound and rehabbed but didn't like her current family's dog. 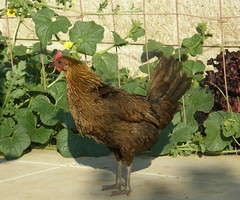 We realized we couldn't have just one lonely hen and soon acquired Pip and Peep, two bantam Rhode Island Red pullets who were hatched as a classroom project. 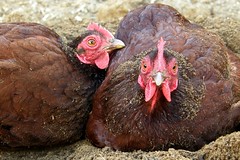 ​
Unfortunately we lost one of them on New Year's Eve 2007. She became egg bound the day before and although we tried everything we could, the egg broke inside her and we had to put her down. It was during this ordeal that we found the BYC forums and used all the good advice we were given to try and help pass that egg. Although we didn't do a necropsy we've come to believe that the egg (her first) was adhered to part of her reproductive tract. The surviving RIR has been re-named "Plumpy" and is our most tame and friendly hen. She has funky egg-laying habits and we get lots of good chicken stories from her.
Next we acquired two Ameraucana/Easter Egger pullets. One started laying beautiful green eggs the very day we got her. They are our first experience with standard-sized chickens and we sometimes refer to them as "The Turkeys" because they are so much bigger than the bantam girls. 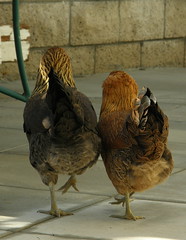 
But we couldn't leave well enough alone. Chick season was just around the corner!​
Chicks, finally! We nabbed the last four at our local feed store and brought them home. They are: 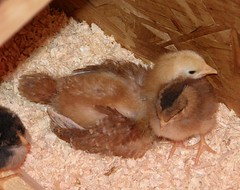 Buffy, the Buff Orpington (the larger of the two here) 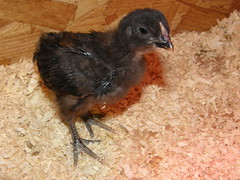 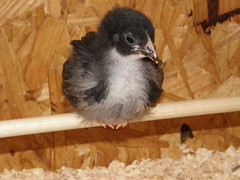 Precious (just the sweetest one so far!)
and last but not least Clover, who I don't seem to have any current pictures of. Hmmm.
We were told that the black and white ones were Barred Rocks but it looks like they are Black Rocks. Oh well!
The next week we picked up six little Ameraucana chicks, who were sold as "Arucanas". They're pretty cute but none of them really have names yet except two: Hoppy and Freckles.​ 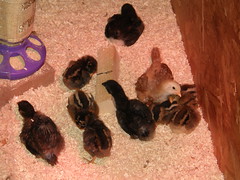 
You'd think we would have stopped there, but oh no! Josh got a bug up his butt to satisfy my desire for dark egg layers and found someone locally who was selling newly hatched Marans and Penedesencas and came home with these cuties, some of whom are still up for identification and sexing. They are by far our prettiest girls, technically. 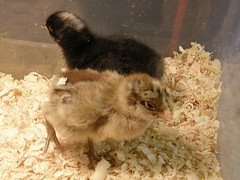 Penny DeSenca in front (Partridge Penedesenca) and a Cuckoo Maran behind her (we have another Cuckoo Maran, a Wheaten Penedesenca and an older Australorp from the same breeder who are not pictured) 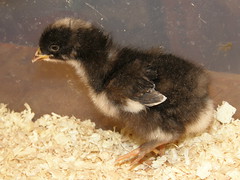 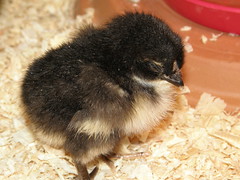 To top everything off we have Buddy, a 2-year old Boxweiler (Rottweiler/Boxer mix) who just LOVES the chickens. He is especially enamored of the baby chicks!
​ 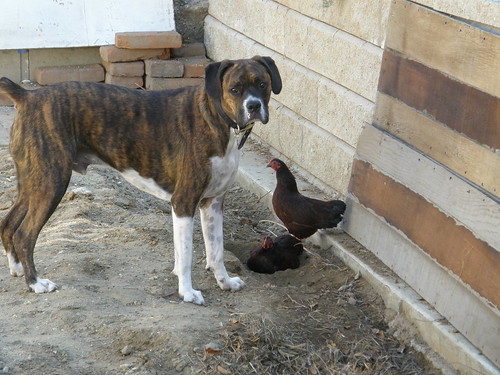