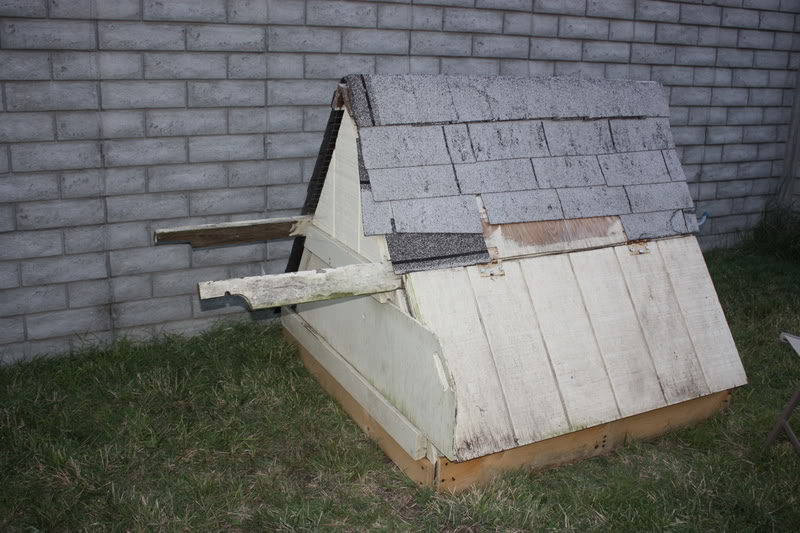 Growing up we always kept chooks and I'm sure it wasn't something my parents gave much thought to. Periodically we went to market and each kid got to choose a day old chick to take home and raise. They ended up in the garden foraging all day and were locked into a little coop at night for their own protection (actually, they went to bed themselves and it was the kids' job to close the coop doors at night and open them in the morning). Mother kept a crock in the kitchen for scraps they might enjoy and once a day we'd empty it somewhere for them to scratch through. None of it was a big deal.

Living in the city now, I didn't think at first we'd be allowed to keep them but once I checked the city ordinances and found we could, I decided I'd like to keep them again for the fresh eggs. My first priority was that raising them should NOT cost more than what we would pay for the eggs if they were store bought. My second priority was that the eggs nutritional value far outweigh that of store bought eggs.

I started by researching coops to keep them in and was shocked by the high prices. I am semi-handy (at least for a woman LOL) so next considered building one but I know from experience that building projects usually end up costing more than you intended and are a hassle as I never seem to be able to put my hands on the right tool at the right time, or have to make multiple runs to the hardware store for just the right size this or that. Still, I figured this was the route I would have to take...until I found someone on Freecycle trying to find a home for a chicken coop! I picked it up from her, spent $7 replacing some rotten boards, and ended up with this: 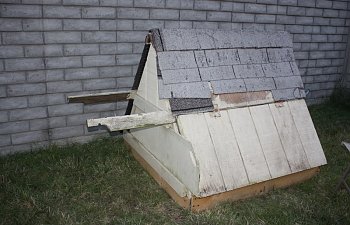 It has a door that slides out to open up the coop and an egg door for when the times comes. The coop also came with a run that contains 30 sq feet of area but frankly, it just looked small to me since I was used to the chooks free ranging 1/2 acre all day. The run attaches to the coop at the end where the door opens up, but I haven't used it yet. For now, the chicks sleep in the coop at night, we open the door in the morning, they free range all day in our backyard, which is very secure, and at night they put themselves to bed. As soon as it is fully dark, we go out and close the door back up. The only thing I am considering changing about the coop is that right now there is no light in there. I am considering getting some plexi-glass and making the sliding door from that instead of the plywood door. This would have less tendency to swell if moist and allow the daylight in, in the morning so they know when to wake up. Thoughts on this anyone? 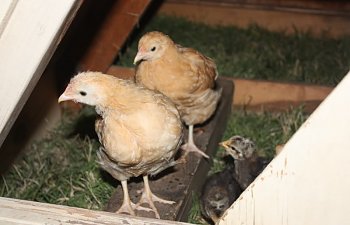 This is with the door open, looking inside. As you can see, it is pretty basic inside. When I got it, it had a plywood floor that was completely rotten, so I took it off. I intended to replace it, but then decided to try no floor. It decreases the weight quite a bit not to have a floor, and they can poop directly on the grass. I move it once a week so they have fresh grass underneath, (I then scrape what poop I can from the grass into the compost and leave the rest there to be watered in when it rains). I am considering placing the coop for the winter in an area I want to develop into a vegetable garden next year. I will then put several inches of pine shavings right onto the grass. My hope is that this will be nice for them over the winter and will decompose into the ground over the few months it is there, providing a nice base for a garden in the Spring. But this is all guesswork and experimentation so this might be a terrible idea. Again, I'd welcome any input!

When this pic was taken I had a scrap piece of 4x4 for them to sit on. I have since added a second 4x4 on top of that one so they are roosting 8" up. They seem to like this. I did put a roost in that runs lengthwise from front to back but it is up too high for them to get to just yet. I also have a small water bowl and feeder that is in the right hand corner as you look into the coop, but since they go in at dark and are let out in the morning, I haven't seen much evidence that they are using these. Instead they all rush to the waterer first thing in the morning when I let them out!
Anyway, the next thing we needed was feeders and waterers. Thanks to the tips on BYC, I decided to try my grocery store for buckets. Sure enough at the deli, as soon as I asked for "a" bucket, an employee came rushing out with an armful of them! They are all the 2.5 gallon size and she gave me a half dozen with lids. I was glad of this as it made cutting into them easy. They were destined for the trash before I got them so I figured if I messed up cutting one, no big deal. I'd put it in the trash and start again with a fresh one.

Next I headed to a thrift store to see what kind of pan I could find. As soon as I walked in I spotted one of those plastic vegie trays. You know, the kind with a circle in the middle for dip and four segmented areas for different types of vegies? It had a lid and was a whole $1. I used the segmented tray to make this feeder: 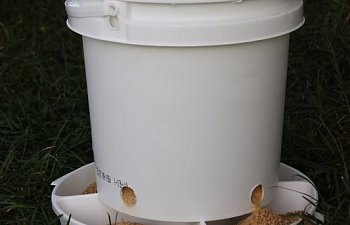 Using some nuts and bolts I had on hand, I screwed the bucket to the tray and drilling the holes was easy. It works pretty well but now I wish I had put the holes in the actual bottom of the bucket instead of on the sides near the bottom. Since I have buckets left over, I may yet make this change but decided to try it this way for a little while first. The chicks recognized it the instant I set it down and rushed over to try it out. I got the distinct impression they approved

The waterer was even easier. Using the lid of the vegie tray as the base, I drilled a hole in the bucket with one of my smallest drill bits, then simply set the bucket in the base: 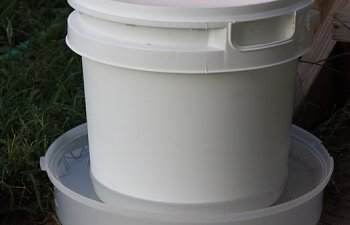 At this point it is not attached so cannot hang, but if I wanted to hang it at a later date, I could screw the base to the bucket. It works like a charm. As soon as the water level is above the hole, a vacuum is created in the bucket and the water stops flowing. I am excited to be able to start adding ACV to the water. For the last couple of weeks I've been using a couple of shallow bowls for water and couldn't add ACV easily because I didn't know how much ACV to add to so small an amount of water.

So - so far, between coop repairs, feeder and waterer, I have spent a grand total of $8.33. The chicks were $19 and a 50lb bag of chick starter was $14. I'm happy to be meeting my goal that the venture will save us money in eggs once they start laying. And I have to say I just LOVE watching the chicks ranging around our yard. We have morning coffee out on the deck so we can watch them, and sometimes eat dinner in lawn chairs too!
Now for our chicks. The first one is one of two pretty much identical chicks that are Rock/BO X. I got them at 1-week-old and in this pic, this one is 3 1/2 weeks. As they feather out, we are seeing the barring in the coloring so I am guessing the "Rock" was a Barred Rock. 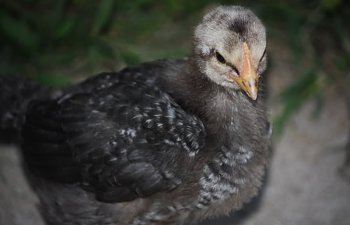 The next one is a BO. We got 3 1-month-old BO's and 4 chicks, one of which is also a BO. He/she is also 3 1/2 weeks old in this pic and was quite interested in the camera, posing nicely for several shots. 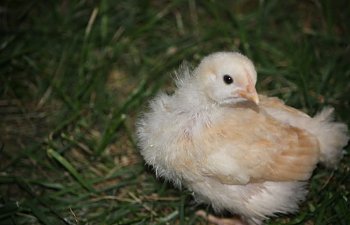 Next is our success story. This chick was very lethargic for the whole of the first week we had them. I thought for sure it was a goner as it didn't seem to be eating much and drank little too. And, it would fall asleep all the time and just stand where it was, sleeping. Morning after morning I expected to find it dead but it rallied and now does well keeping up with the others. It is supposedly the same Rock/BO cross as the two black ones but obviously very different coloring. I've been trying to figure out if this is a sex-link thing, or just "one of those things". This one has been slow to develop and is about half the size of the BO & 2 black chicks, even though it now eats, if anything, more than they do. Oh, and this one also had a case of pasty butt which I had to treat. The kids thought that was a hilarious name for a condition and the chick subsequently became known as "Pasty Butt". A few days ago I told them we don't even know its a girl and if its a boy, it can't stay, since we can't have roosters in the city. So DH suggested if its a boy we can change its name to Tasty Butt. So now that is the chick's name. 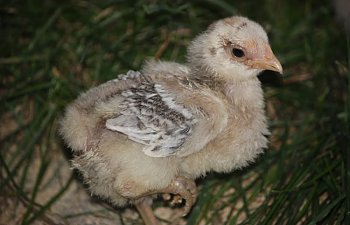 The next pic is one of the 3 older BO's, along with Tasty Butt, drinking out of the shallow bowls I was using before I made the waterer. There is only a 3-week difference in age but the difference in size and development is amazing. 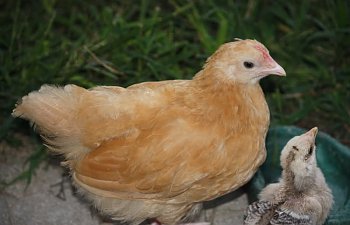 Last, here is a pic of the chicks drinking out of a rabbit waterer. We taught them to do this during the first week we had them when they lived inside in the brooder. Some of them still prefer to drink out of this so I have it attached to a rabbit run and keep it full for them. 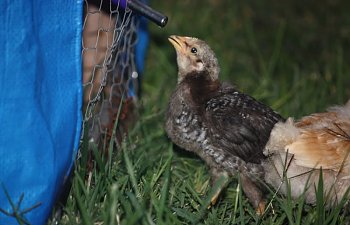