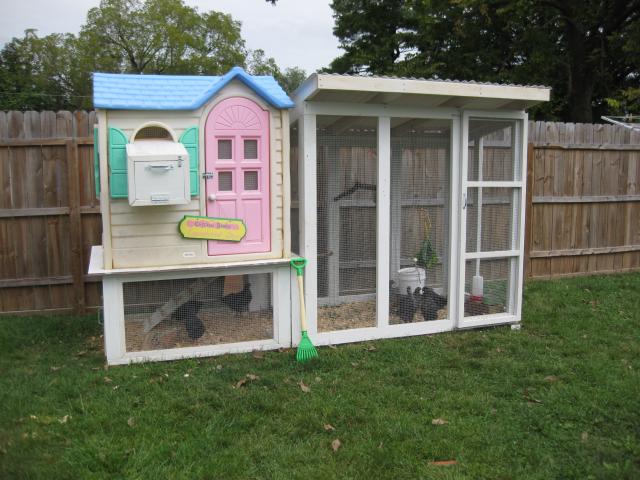 ​
A couple years ago I decided that I wanted to start raising a few chickens in our small town backyard. So, I started to reseach coop design and poultry husbandry and knew that I wanted to get started right away. Unfortunately, I didn't have money at the time to spend on the coop materials. So I put the project to the side knowing I'd come back to it eventually.
Fast forward to June 2009, I had scrounged up some recycled materials and had a little savings that I was willing to part with. I priced lumber to get started and became discouraged. There was still no way I could afford the coop that I had envisioned. A couple weeks later I was hanging up laundry in the backyard when I noticed the abandoned playskool house that my kids had gotten as a hand-me-down from some family friends, then never played with. The wheels started turning. Later that afternoon I drug it out of the yard and into the driveway. I got out the staple gun and screws and tested it out to see if they would fasten securely and they did! So, I got to work cleaning it up. A little bit of bleach sprayed on it and a blast with the hose got it pretty clean. There was still moss growing inside the walls but that wouldn't hurt anything!
I bought a roll of 1/2" x 1/2" hardware cloth and got to work covering the windows. I cut each piece 4" taller and wider than the opening and bent the sharp edges under using pliers. Then I attached it to the inside using fender washers and screws. ​ ​
My husband built a nestbox that would open from outside the coop. I painted it white inside and out and attached it to the front window.​ ​
I knew that I would need to cover the windows with plastic in the winter so I had to add some venitilation. I went to the hardware store and found a vent cover. It was made of tin and had three sections of fins seperated by a 1" strip. The cost was about $3. (Right in my price range!) Each of the three sections was about 4" x 6". I simply cut the sections apart using tin snips. I used a hole saw and sawed a couple of 3" holes one above the other and slightly overlapping on each gable. Then I screwed the vent pieces over the holes on the outside.​ ​
Next came the base. Our yard isn't real big and the chickens need to share it with the garden, clothes line, and our two little girls, so I wanted to add more room for them using up some verticle space. I built a box slightly bigger than the house using scrap 2x4's and 4x4's. (I believe they were pieces left over from when my husband built our deck.) I painted it and covered it with hardware cloth and made a door on one side. Then I ripped some 2x4's into 2x2's and covered the edges of the wire for some added architectural detail. The top was covered using a sheet of plywood. I set the house on top of the whole thing and screwed 2x4 scraps in the corners to keep it from shifting around. A hole was added to the corner and a chicken ladder was made. Then I caulked around the bottom on the inside and outside using clear silicone. I also caulked the seam down the middle of the roof. This was to keep it dry inside during wet weather.
At this point I was ready to start on the run. I used $45 out of my savings to buy some plastic roofing sheets. I wanted the run to be covered since we get so much rain and snow throughout the year. My dad had offered me a bunch of old 2x4's that were stored in the attic of the garage. The only catch was that they were 50 years old and had a LOT of nails and staples in them that had to come out. So I spent a week pulling the nails and staples out, sanding, and painting them. My husband helped me build the frame and a door, then I stapled the hardware cloth to the inside. The roof slants back to help the rain and snow run off.​ I also added a couple of roosts at different heights in the run using old tree branches. The girls love them! They even choose to sleep in the run on the coldest of nights.
And that is it! A pretty simple, cheap structure using a lot of recycled materials. Thanks for stopping by and checking out my page!

Nice job repurposing a playhouse. Would love to see pictures of the inside
Reactions: FoxySonia
Read more…

What a spectacular idea! Way to recycle!
This has just changed everything for me! Thank you!
Great idea! Makes me wish I kept our play house!!!!
Amazing. Thanks for the great ideas

Great idea, I have an unwanted playhouse as well, and we will be doing this same thing this weekend!!!!! Thank you
I too have just inherited a playhouse to convert to a chicken coop, thanks to you and your pictures on backyardchickens.com.
Thanks for sharing. I hope to share my set-up in the very near future.
Very nice! Thank you for documenting and sharing.
That is really cool!
This is my favorite EVER...I am going to look for one of these houses at yardsales...etc because that is PERFECT!!!
GOOD JOB!!!!
This is absolutely adorable!!! I love this idea, and as you said it's a cheaper way to go. We have a playhouse already, so all we need is a little lumber and some chicken wire! Thanks so much for posting

I absolutely love this! yardsaleing tomorrow with a mission for a playhouse!
I've rigged up something with a $50 Little Tikes Log Cabin. It's inside a chain-link dog kennel until I can construct a proper run like you've got. VERY cute setup!
How did attach the nesting box to the window? Is that the only nesting box you have? It looks like you have 6 or 7 girls. I love the design and am just about finished with mine that I mirrored off your design. The kids are super excited and happy to "donate" their playhouse. Thanks
I absolutely LOVE this!!! I may have to do this for my girls.

I LOVE it... I really like how it doesn't look super cheesy too!
Cute as pie!
wow great idea!!
I've been looking for cheap ideas to be able to build a coop, and this definitely hits the spot! Thanks so much!!!
Does it stay warm enough in the winter? Is it drafty at all?
Haha! nice...