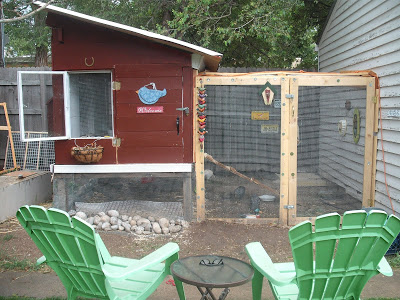 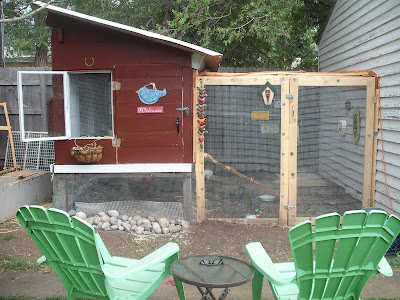 
After years of deliberating, I decided that it was time for my four year old daughter and I to have a few chickens in our small backyard in Englewood, Colorado, a suburb of Denver. I started out thinking that I'd get a little Eglu or something similar, have a nice pair of hens, and that would be it. However, after delving deeper and deeper into chicken world, well, here's what we wound up with!
The process was a lot of fun. I started out with this space behind my garage:​ 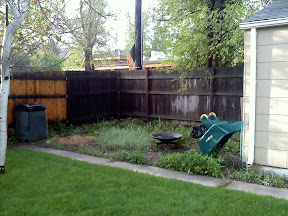 After realizing I wanted a decent-sized coop, and admitting to myself that I couldn't build one on my own, I found a guy on Craigslist to do the work for me. I sent him over these plans and asked that he build something around 4 x 4. My plans were based on all of the advice I got here at the forum! I know they aren't very exact, but they had everything I wanted: a window, a vent, outside nesting boxes, and a pop door. 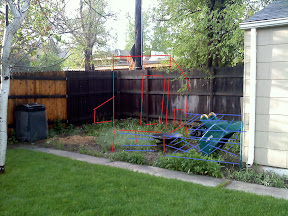 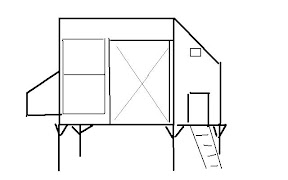 I then commissioned my dear brother to start digging some holes... 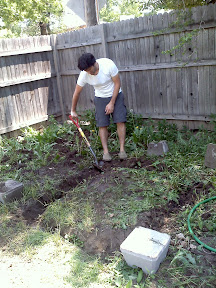 In the meantime, I had 4 baby chicks that I got from Wildfire Farms in Erie, Colorado living in a brooder on my kitchen table. Max(ine), Ruby, Lydia and Stella came to our house at just 3 days old. 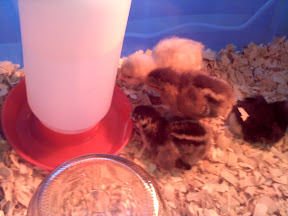 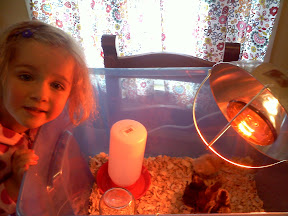 After they were about 3 weeks old, I thought it might be nice to give them a little playpen, as well as test out my building skills. The pen worked for a while, but I affirmed the fact that it was a great idea to hire someone to build the coop as it sort of fell apart after a few weeks of use. The neighborhood kids and my daughter actually liked to climb in and out of there to play with the chicks. I think they liked it... 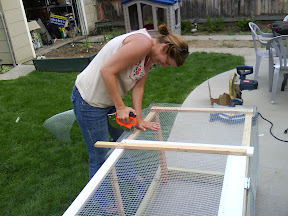 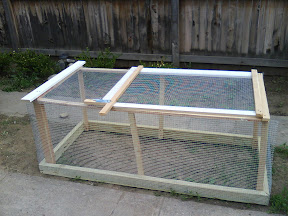 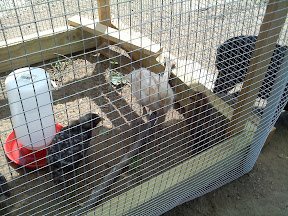 After a couple of weeks, the coop arrived! It was massive and way bigger than I expected: about 5'x6'. Justin, the guy who built it, had a rough time getting it into my yard, knocking out a hanging power cord and running over a corner of my garden. (Next time build on site??). After a day of wrangling with it, he finally got it to it's permanent location. Here he is with my daughter and her friend...I love the juxtaposition!
He built the coop with scrap wood. It is insulated with newspaper between 2 layers of the wood. The roof is plywood with a corrugated top (around $25 at Home Depot). He attempted to create a hardware cloth bottom, but I knew I'd have some adjustments to make to really make the coop predator-proof. We were thrilled to have it here though, as the chicks were now 5 weeks old! 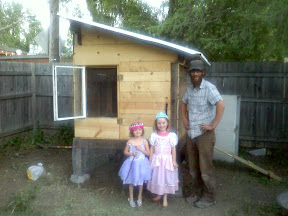 Next it was time for me to make things both pretty and secure. I painted the entire thing, inside and outwith Kilz. I then found some old house paint for the red exterior. Luckily, I had an old broken Welcome sign that I planned on fixing one day...who knew that all I needed was a drill to make it perfectly good again? I covered the windows and vent with 1/4" hardware cloth (I am fearful of mice getting in), bought a can of spray foam insulation stuff and put it in the bigger cracks, and added a few branches & logs. I got some feeders and some pine shavings, and the coop was good to go! 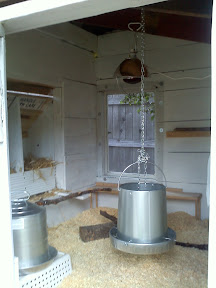 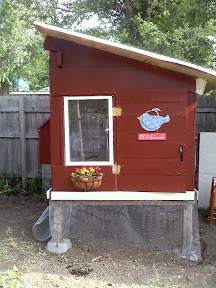 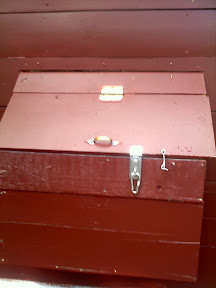 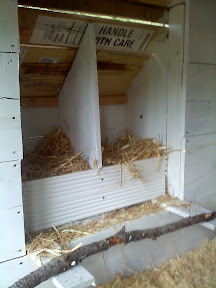 Next, the run! I found another friend, Chris, to help me put it together. After we realized how poorly we designed it, yet another neighbor/friend, Trevor came by to help make it functional and long-lasting. I don't know what I would have done without these guys. I'm going to owe a lot of eggs!! 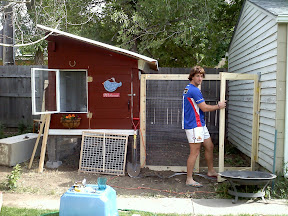 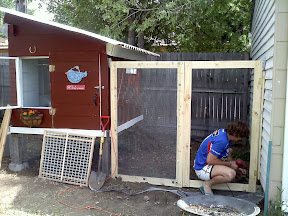 I secured the entire bottom with 1/2" hardware cloth buried down about 6" and also skirted out about a foot. I buried a lot of the skirt as well. I attached the hardware cloth to the wood with screws and flat washers. My hodge-podge of locks secure the run door (top & bottom), the coop door, and the nesting box door. I really don't think anything can get in here, and as of this writing (chickens living there for 4 weeks), nothing has. 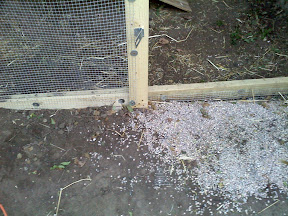 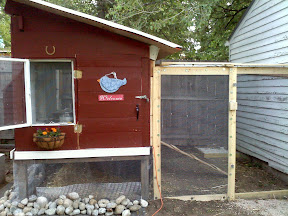 My daughter loves to put her chicken boots on and hang out with the girls. We also built a small dust bath filled with ash, play sand and DE. So far, no bathing... 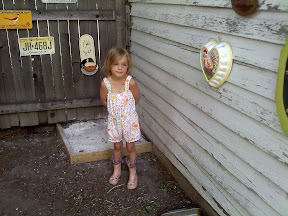 ​
The girls like to hang out under the coop, and I think they enjoy the chicken art I've been collecting from Goodwill...especially the duck grit-holder 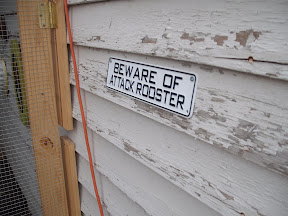 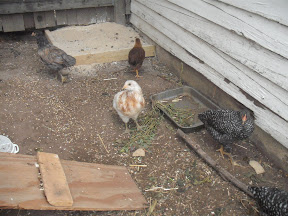 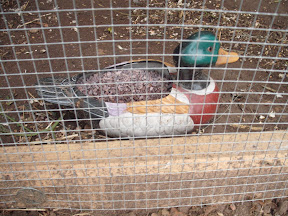 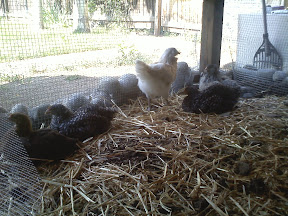 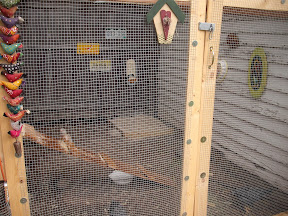 ​
I love this coop. I love all of the advice and help I had from both the forum and my friends and neighbors--a lot of love and sweat went into putting it all together. I'm so proud that it got done, that I learned so much, and that it's a great home for the girls. So much better than an Eglu! The "Chicken Lounge" has brought our neighborhood together--we have a full box of chicken boots for all of the kids and we have a full fridge of drinks and beers for the neighbors who regularly stop by to visit. Hopefully soon we will invite some residents at the "old folks home" down the street to check out the chicks. This summer has been all about the chickens, and it has been an incredible experience!​

The article needs more build details
Nice coop and the article has no details of the build.
Read more…