Leave a rating
Can I just start by saying I LOVE having chickens! We moved to the country 7/15/2011 and I told my dh it would be nice to have couple hens for fresh eggs since we are on an acre of land and the thought of fresh organic free ranged chicken eggs sounded so good to me! He was hesitant but agreed after he saw how excited the kids got! We found a local seller and went over to get our new chickens around the end of July the same month we moved in. I had read online it's best to buy pullets or hens around 5 months since you won't have to wait long to have eggs but I reasons that if I got younger chicks they would make for tamer pets for my four kids who were already excited to have new pets! I let them pick them out and when we got home with I realized I had no idea what we had LOL they got one of each color! Red (Ruby) white ( Betty) gold (Honey black (Ebony) so we had four different color hens from 10-12 weeks old and to this day I have no idea what they are! But we love those guys so much it's hard to believe. Well after three months of feeding them and watching them ever day roam around our acre we learned a lot about them and have enjoyed watching them establish just who was in charge and who was last on the totem pole but they all stay together and get along wonderfully. My neigh or told me about Cochins and how much easier they were to have as pets since "the girls" would always run from the kids so we added two Cochins (Buttercup & Buffy) so funny to watch them run and waddle after the big girls! Then I see a beautiful white silkie hen when I'm buying my Cochins being picked on he offered her to me and I just had to rescue her so we added Princess Laya to the flock! Now that is a real pet LOL she follows me around the yard when I'm out and about but always being picked on by "the girls" poor baby always gets run off by on of them so we decide she needs her own space which requires her very own hoop chicken tractor, after all she is a princess

but now I think she is lonely so we buy two silkie chicks a black one and a blue one, then a couple wks later a splash! Well everything is great on Karens little acre until the neighbors dog gets loose and kills our precious Buttercup

so sad when you hear your 10 yr old child crying "my life is ruined" cos her favorite chicken is killed! So off to the poultry swap we go. Now mind you my husband is saying every chance he gets NO roosters but he falls for a little bitty pair of chickens a roo & hen and has to have them! Ha Ha he is getting bit too by the chicken bug. So this time I'm sure to ask the seller what breed or kind are they so I can look up info online and he says "gray burst" ok whatever never heard of them but what do I know about chickens right? So I get home look up the name online and what do I find, absolutly nothing...so once again I have chickens that I have no idea the breed urgggg it's making me a little nuts especially whe my friends say you have chickens what kind? I have to reply not sure but they are red, white black, gold and to new ones that are gray but not sure what they are either! Well it's been a little while but lots of updates! Both Betty White and Ebony started laying eggs Betty 10/31/11 and Ebony a week later! Yay but what a drama it was that day...for hours Betty clucked and clucked going from coop to coop then in and out each nesting box! She was so stressed out poor baby we tried to calm her and show her where to go and would put her in the nesting box then pet her. I wondered if I was interfering to much but she finally did it and was so proud of herself as we were! Ebony not so much lol she looked at us as to say I got this... Just went inti thud nest and laid her egg

Now since we have a rooster and I know a few fertile eggs we have to try to hatch a few right? After all Gracie is doing a study on Chickens for a school project and what could possibly be more educational? We bought an incubator and turned the eggs every day for 18 days then lockdown for the last three days. We set eight total, 2 Araucanas and 6 bantam cochins from Buffy! It was very nerve racking trying to make sure the temps are right and humidity then to top it off they were due to hatch the day we were to leave for vacation

we had a friend lined up to watch them while we are gone so it would all work out fine right... Well hatch day I got a pip on one Araucana egg and got really excited but nothing after that for 12 hours! When I went to bed that night there was a little triangle hole and that's it but when I awoke she had hatched and was just looking up at me sooo cute! Now another pip from a Cochin but she seemed to be struggling and not making much progress until the Araucana started helping her

every time she would peep it would start pecking at the hole until finally she hatched. 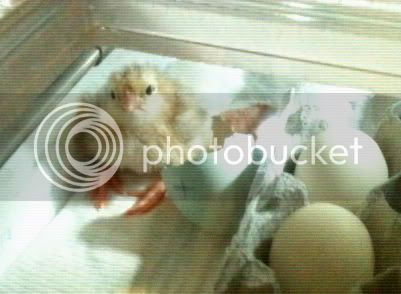 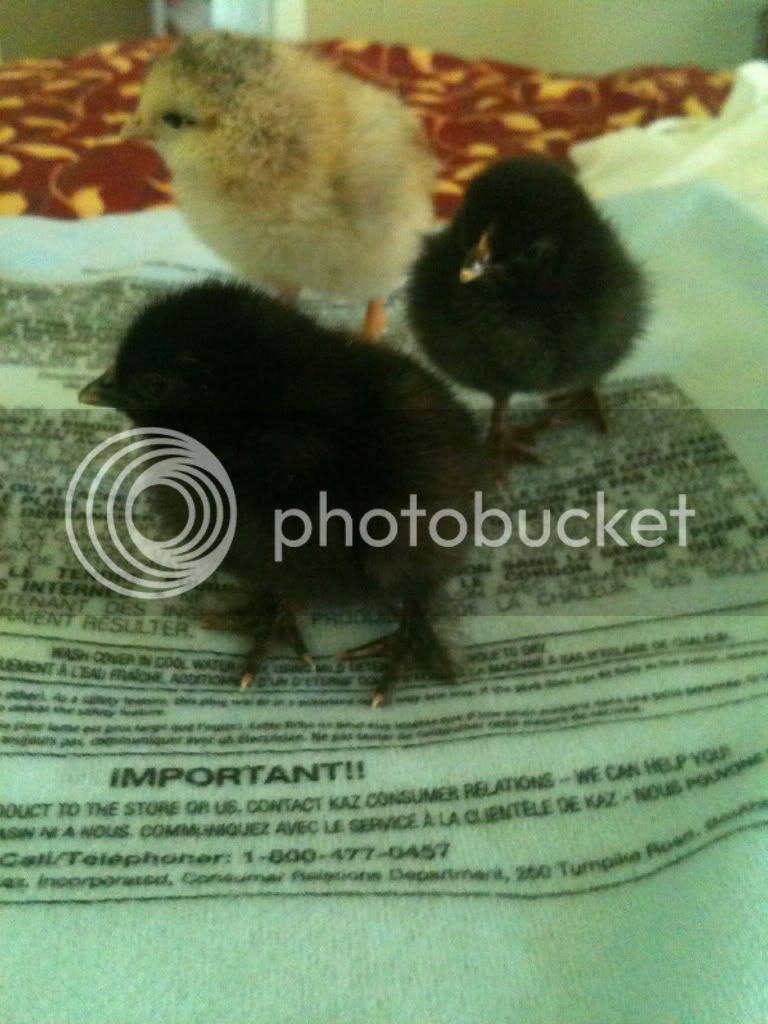 Ok it's time to leave for vacation but how can I leave with two newborn chicks and possibly more to hatch? I tell DH I'm getting really stressed because I can't leave them with someone else! I'm mommy to those babies! Needless to say he wasnt to happy but he saw I wouldn't budge and offered to set up an inverter in the van to plug the incubator into so we can bring them with us! Great idea I'm happy and ready to leave with the incubator on the floor by my feet right where I can see them. We had a 12 hour drive and nowhere to put my feet but I'm not about to complain. When we were half way there in Alabama I decided to move the eggs up a bit so I could see them better and low and behold I had another pip! The kids are so excited and trying to see the new pip when we noticed he wasn't just pipping lol he was zipping within 15 min it was hatched and everyone was able to see it. We thought we have to choose a name with something to do with Alabama so we came up with Dixie since Alabama is considered the heart of Dixie