Article Gallery
Leave a rating
Currently, I'm an art student living in the 'burbs' and I'd love to start keeping chixs at least a few years after I move out of my parents house. There's a constant fluctuating 'ultimate chicken coop design' in my busy little brain (along with the house I'll build), so I may post some sketches for critique! 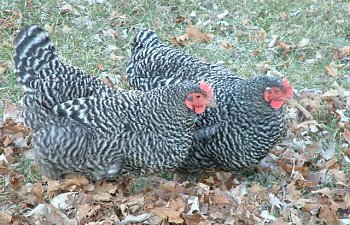 My parents (mainly my mom) kept about 25 Barred Plymouth Rock chickens with the later addition of my 6 4-H Rhode Island Red hens (*winks* won some ribbons).
We were all new to keeping chickens so, looking back, there were a few coop design flaws I wish we had studied about first. Like putting wire on the fence instead of wood (was thought to be too expensive), keeping the yard clean a.k.a. raked (got into a permanent muddy mess of poo), and building the inner coop so it was easy to keep clean (too many little crannies and we got tons of flies), and making easy to scour nest boxes (chix pooed in them often), and general coop placement (woods on two sides, with trees overhanging...guess what used 'em as spring boards? Heh).

Originally, we had three roosters. The whole flock was ordered from McMurray hatchery so we got 2 Barred roosters and one Aurucana (sp.?). Definitely learned our lesson with those....roosters aren't bad, but 3.... One Barred buffed up ("Captain"), another became scrawny, cowardly, and a conniving, sneaky little snot ("Lieutenant"), and the Aurucana which -also- buffed up (can't remember the nickname for it, but it had an awful temper). The Captain and the Aurucana would fight all the time, and the Lieutenant would gang up with whoever he thought was winning. *Amused* Wish we knew how to handle roosters at the time, cause our method turned out to be "walk softly and carry a humongous stick". (Dad was attacked at one point and accidentally knocked out the Captain, then had to beat the Lieutenant off until he woke up.)

Anyway, with the 3 roosters, egg-eaters, feather pickers, and so forth, wish we had this site at the time. I liked keeping chickens. When you keep a smaller number of chickens and are able to be outside with them when they free range, they like to hang out with you. They're tamed over time and easier to keep. I think we started with too many at once...