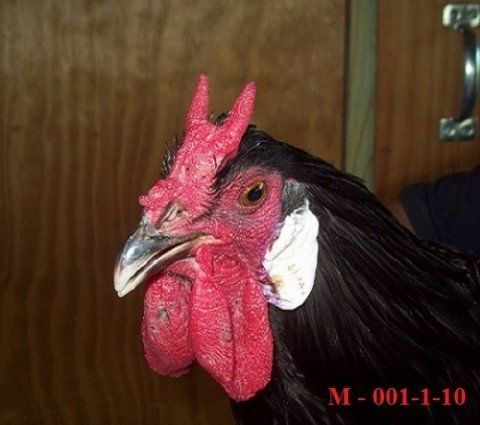 The La Fleche is an old French breed that originated in the Valley of La Sarthe, were the town of La Fleche is located. They have been bred there for a long period of time and has been known since the fifteenth century, but it is believed to be much older. The La Fleche breed originated from crossing of Black Spanish -Creveecoeur - Du Mans blood lines is evident by its high carriage, activity, large white ear-lobes, V-shaped comb, and the trace of crest on head, which crops out on specimens of the French breeds.In general appearance the La Fleche is a tall, Spanish-looking fowl, though not now bred quite so tall and upright as formerly. The Black La Fleche breed was admitted to the Standard in 1874. They are a general purpose fowl for the production of meat and eggs. Color of skin, white; color of egg shells white. The La Fleche is sometimes called the devil bird because of its black plumage and upright, V-shaped comb that takes the appearance of horns. The Black La Fleche is one of the most unusual breeds of poultry. So where would I look to buy these ? Can you tell me if they are heat hardy/cold hearty? Average days they lay?