Article Gallery
Leave a rating
So the new coop is underway. We are converting an old building that had been used as a Acrtic entry (long ago) & storage (by my mom for years). So here is a few starting pictures. 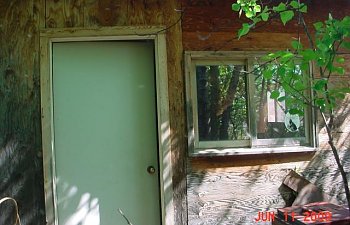 First note, it is full of all kinds of stuff. Second note the roof is falling in! well first we have to remove most of the stuff, we started by taking out anything not salvagable, and sorting through the remaining stuff.
We have to remove the roof, ceiling and all the rotten wood.
next is getting the Roof back on, and that requires that a retaining wall be built as the lumber purchased is not long enough to cover it! So there is the beginning......
Then we have to insulate the Roof, and leave ventilation areas Then add wall nestbox will be added to the retaining wall, and the roosts will sit above the nestbox. Now on to the rest of the building.... Due to all my hens laying in the same nestbox and climbing in on top of each other, we decided to skip the dividers to begin with, maybe we will add some later. Now all that is left is constructing the door and placing Feeder, waterer and chickens!