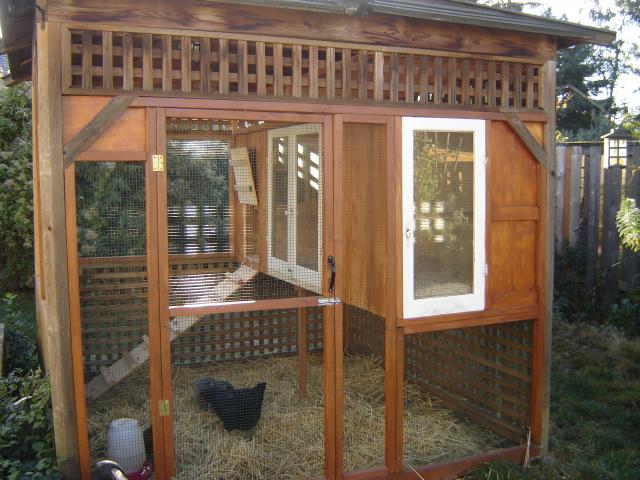 We used a gazebo that was already in our yard as the frame and built the coop into it, and the whole gazebo became the run. This is far more secure, and better looking, than our first attempt. It is also much easier to access and to clean. We built in two nesting boxes, with outside access. The inside has a natural branch for a roost, as well as a 2x2 for support. The side of the coop has a window that is lined with hardware cloth, so it can be opened for extra ventilation. Clementine the Auracauna, Petunia the Barred Rock, and Harlow the Black Star.

I really like your idea of turning your old gazebo into a coop and run for your chickens! I am also very happy to hear that you added the hardware cloth over all of the wood lattice!! Your coop looks nice and bright and well ventilated.
Is your branch roost secured to the support beam? I would think it would get moved around and could fall down as the birds land and take off from the branch.
What are the dimensions of the actual coop? Did you cover the floor of the coop with anything or leave it wood with shavings over it? Is it easy to clean out? Did you build a clean out door?

I would have liked to see more details about how you actually built the coop, but I think it is a really neat idea and it looks like it turned out very well.

Thanks for sharing your coop with us.
Well made coop and good looking also! Would help to have some details on the construction phase. The hens look healthy and happy.
Read more…

gorgeous!
I Love it!
This coop is AWESOME!