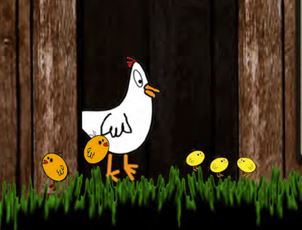 There are so many bedding material options for brooders and coops out there that choosing one can quickly become an overwhelming task for new flock owners. Ask 10 'seasoned' flock owners what the best choice is, and you're likely to get 10 different answers! But it really doesn't have to be a difficult decision at all. Here are a few of the more commonly used and easily obtained bedding materials, with some basic information about each one:

Pine Shavings-
Pine shavings are inexpensive and readily available at most big box and pet stores, such as Walmart, Petco, and PetSmart. Farm and ranch stores, such as Tractor Supply also carry it, as do most general feed stores.

Pine shavings that are untreated can safely be used in brooders and coops and will not harm chickens. Chicks may try to eat the shavings, but this is uncommon and generally stops once they learn what their food is. With day old chicks, a layering of paper towels over the shavings is recommended for the first few days in the brooder.

Cleaning the brooder is relatively simple, but with cages or wire-sided brooders, you'll have pine shavings to clean up OUTSIDE the brooder as well. It's a good idea to wrap cages with a strip of cardboard a few inches tall to help contain the shavings.

Used pine shaving bedding can be added to a compost pile, or tilled directly into soil.

CAUTION: Do not use Cedar shavings in brooders or coops. The strong aromatic oils in Cedar can cause respiratory problems in chickens and other small animals.

Many people use sand in brooders and coops for it's low cost, superior drainage, and ease of cleaning. Play sand is available at big box & home improvement stores, such as Walmart, Home Depot, and Lowes. It can also be purchased by the 'load' in many areas from local sources. It's a good option especially for coops with bare earth floors, but can be used in completely enclosed coops also.

For smaller coops that get daily cleanings, sand provides a 'scoopable' bedding, much like kitty litter. It can, however, become compacted when it stays wet and is therefore not recommended in environments with high humidity or for those that are routinely exposed to moisture.

Chicks may attempt to eat sand, but this can be avoided with a layer of paper towels over the sand for the first few days in the brooder. Sand with no covering can become quite hot, so be sure to locate your heat source far enough away from it to keep the sand from being too hot for chicks to walk on.

Used bedding sand can't be composted, but it can be added to soil to help improve drainage.

Often used on farms and ranches that also house large animals, straw and hay are frequently recommended as brooder and coop bedding materials. Both provide good drainage, but less than optimal absorption. It is easy to clean and often used in deep layering. Both straw and hay are low cost bedding options, with straw being significantly cheaper than hay.

Used straw and hay bedding can be raked out of the coop and thrown directly into a compost pile.

CAUTION: Straw and Hay can mold quickly when exposed to moisture. Mold can cause serious respiratory problems in animals and humans. If you suspect your bedding has mold, remove and destroy it, disinfect and dry the area thoroughly and replace with fresh bedding.

For day old chicks, the simplest brooder bedding for the first week or two is newspapers or puppy training pads covered with paper towels. Cleaning is quick and easy by simply removing soiled paper towels and replacing with clean paper towels. If done regularly, the underlying newspaper or training pad should last several days before needing to be replaced. Similarly, a folded bath towel can be used under paper towels.

CAUTION: Newspaper should not be used alone. It's surface is too slippery for chicks to easily walk or stand on and can cause chicks to develop splayed legs.

Soiled newspaper and paper towels can be added to compost piles.

Food Grade DE can be mixed in to any type of bedding to help dessicate or 'dry up' droppings. Less moisture means less odor, fewer flies, and easier cleaning. Food Grade DE is safe for chickens of all ages, other animals, and humans. It is a powder, so take care that you or your animals do not inhale it during application.

Food Grade DE is sold in farm & ranch supply stores, feed stores, and online. Pool supply companies also sell a form of DE, but it is not food grade and should not be used in animal bedding.

When mixed with sand, DE improves the 'scoop-ability' and lessens the problem of compaction in humid areas and makes a great dust bath for chickens.

Many people use and recommend products such as Stall Dry, Sweet PDZ, and Dry Stall as bedding additives to help control odors. They work as ammonia neutralizers and are typically made up (either singly or in a combination) of natural ingredients like DE, clay, volcanic aggregate, or calcium bentonite. While food grade DE is safe for human and animal consumption, if you use a branded product, check the label and ingredients before allowing your animals to ingest it.
Reactions: csridgway115, LouLou44, tomfromsc and 2 others

Thank you! Good info for a first time Chicken mama. Our 4 girls are just about ready to go outside full time. They are about 7 weeks old now & outgrowing the brooder tank we have them in. We were wondering if we could compost pine shavings. Glad to learn this is OK!
Thank you. Great, informative article for this rainy time of year.
Reactions: WannaBeHillBilly
The chart was especially helpful.
Reactions: WannaBeHillBilly
Read more…

Great job! :-D
Well done, very nicely written! *like!*
Great job!
Congratulations! Your article is now featured on the homepage carousel! Thanks for submitting it to our BYC Article Writing Contest.
Your image is way too small, zooming in makes the words blurry. If you could upload a larger one, it would be easier to view. Thanks!
This is a great compilation of information. Exactly what I needed as I wondered about whether I should continue to use the pine shavings I started the chicks brooding as they get older for bedding. Thank you!
Great article...thanks!
Actually, there is no study that has found that chickens have any problem with cedar shavings. For decades they were used in floor operations with no problems.
Utah State University extension recommends cedar shavings in the brooder:
http://extension.usu.edu/htm/news/articleID=9826
• Be aware of basic brooding needs in the first three to four weeks of a chick’s life. These include clean water, quality chick starter feed, clean litter (pine or cedar shavings are recommended) and a circular confined area to keep the chicks from wandering from the heat source.
Texas A & M extension and the Poultry Science faculty at Oregon State University hadn't seen any evidence that cedar was bad for chickens; both described it as a rumor.
This is great defintaley helped me confirm why i am using sand in the coop!
Great article! Thanks for the info!
I keep and Breed Cochins. This year I made the chicks a broody box. This was built off the ground with fine wire mesh for the chicks to walk over. There droppings fell through to sliding out trays. This keeps the whole thing clean and free from spoils. The feeder sits over the left sliding tray and captures the overspills and enables me to recycle the feed The water drinker sits above the middle sliding tray at the front, to the rear of the same tray is the over head heater. so any water spillage is evaporated away. So far all nice and cosy. I have after 4 weeks, collected the waste and started to store for the garden.
This wire mesh floor eliminates the need for litter to be used.
Andy, I would love to be able to use a wire but in states like Ohio that get harsh winters its not really an option for us.
Love the article and how creatively you presented the material.
Thanks for the info! I have been using straw for our coop for about a year. Living in Colorado I had mold issues this spring & was thinking of using something else. Can you wash the sand & reuse in in the coop once it has dried out?
I've heard this before, but its nice to here it from BYC. I started with pine shaving - went to hay - straw- and back to pine, My girls like it, its easy to clean up. Never heard about sand? but its nice to know. some times one of my girls will lay on the ground (sand-gravel) now I know its ok. Thanks
This is so helpful! Very well written!
Thank you everyone, for the kind comments! I'm so glad the article has been useful to so many of you.

Quailsong- I'm sorry the image isn't more clear. I did upload it at the largest size allowable. I was also disappointed at the viewing size. My intention in creating the infographic was for folks to be able to see it full size and even print it if desired. I'm not sure of BYC's rules on this, but if allowed, I can host the image on my blog and provide a link for easier viewing.
The Yakima Kid- Thanks for the links supporting your comment. Cedar hasn't been 'proven' unsafe, but it isn't generally recommended for young chicks. Since it is well known the aromatic oils in cedar are too strong for many small animals, I chose not to recommend using it. I'm going with "safe" rather than "sorry" on this one. I'm sure it has worked well for many folks. I personally have not used it in my brooders due to there being so many other options available.
eggoland- I've never washed and re-used sand, but I don't see why it wouldn't work as long as it dries completely.
Really helpful. Wish I had read this when I started out a few months ago...
You must log in or register to reply here.

More in Housing & Feeding Your Flock