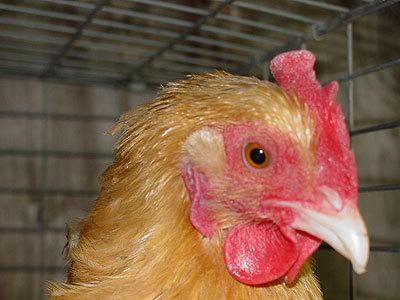 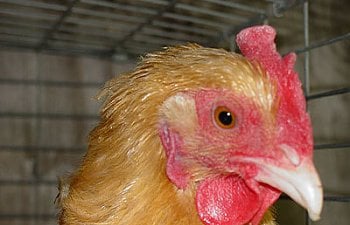 here she is inside her daytime run 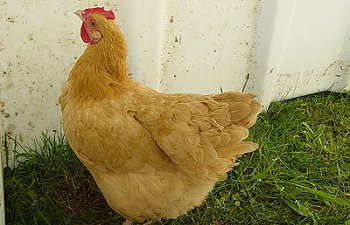 this is her "first egg". obviously it's not her first egg, but it's our first egg from her after what felt like a really long moult. 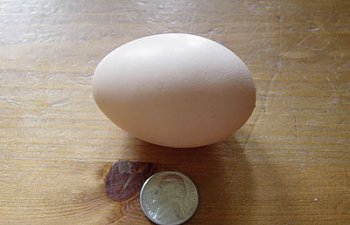 this is the standard rubbermaid brooder (it's actually sterilite, ha ha) for the impending chicks 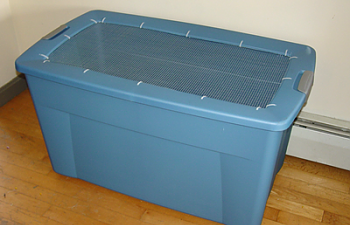 and this is the "almost before" pictures of our old shed that i'm slowly converting into a coop. it's a 10x12 gambrel building with a junky old metal roof that was full of nail holes. it was also just full of junk, both ours and that of the previous owner. it's still full of junk, come to that, but probably 1% of what was in when i started. of course, some of that stuff is now just outside the shed, waiting for a trip to the dump or the scrap metal dealer. 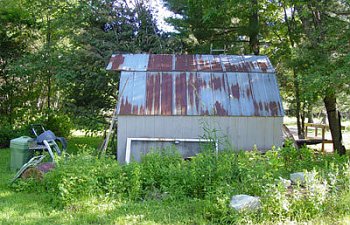 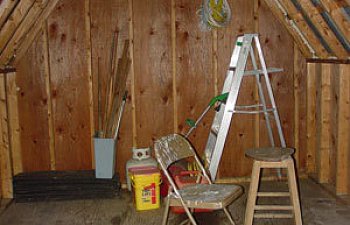 as difficult as things get sometimes, as hard as it is just to live and thrive, i know i'm very lucky to have the opportunity to raise my family here, to have them growing and learning where it's clean and safe and a chicken might come strolling into their lives at any moment.
july 1, 2008

we're two or three steps closer to predator resistance in the daytime, single hen run. i've still got to intall one more hook and eye closure and rehang the hasp on the door. something could still dig underneath, but the dog and other stock should keep away the determined diggers during daylight hours (and that was some serious alliteration!) 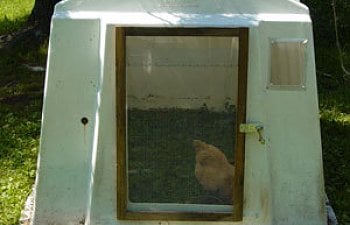 100% recycled nest boxes! they're milk crates with two pieces of found 1x2 lumber cut to size and attached with screws. with screws, i can remove the wood if i ever need to, for cleaning or replacing any parts. there are four of these, but one is in the run with the hen. 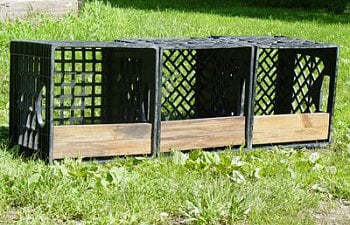 and she used it, too! 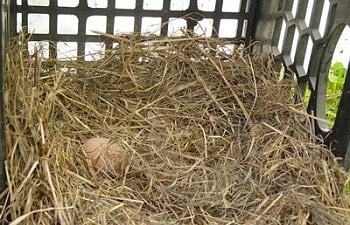 long time, no update! weekend have been spent building the coop and i've spent far too much time with my head stuck in a brooder. brooder? yes, the babies arrived on july 30th from meyer hatchery by way of mypetchicken.com. we were roused from our beds around 7am after spending an anxious day on the 29th waiting for the call. we tumbled out the door in various states of wakefulness and habillement.

when we got to the post office, the door was locked, but a gentleman who'd come in ahead of us had knocked at a side door and picked something up, so we tried knocking, too. they were only too glad to get rid of the peepers. the lady assured me that they smelled (not that bad!) 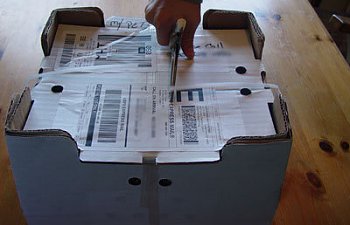 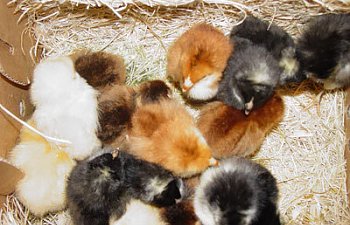 we ordered 15 and there were sixteen small balls of fluff. the extra was a barred rock, which we promptly named "peanut". the others were as ordered: 3 rhode island reds, 3 barred rocks, 3 partridge rocks, 3 buff orpingtons, and 3 black australorps, all heavy laying birds with proven cold hardiness and good dispositions.

all of the chicks were alive, lovely, and healthy. we stuck them right in the brooder, which had been waiting for some chicks for days. 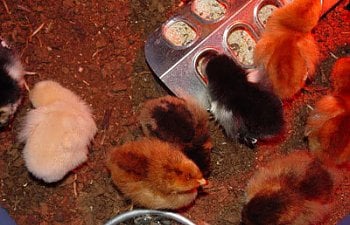 i decided to try peat moss as a bedding substrate. after weighing the pros and cons of various beddings, i decided i was willing to use a non-renewable resource in exchange for reduced smell while the brooder was in the house. 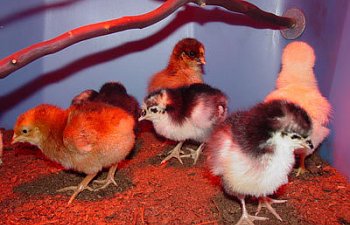 i elected to give them a roost during the first week, well before they needed it. 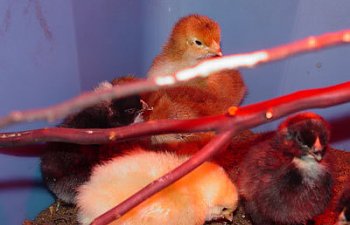 on a warm sunny day a week later, they took their first trip outside. i used felicity's calf hutch for their outing. the kids piled right inside with them. 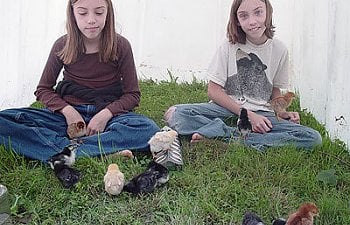 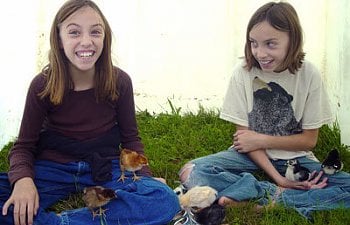 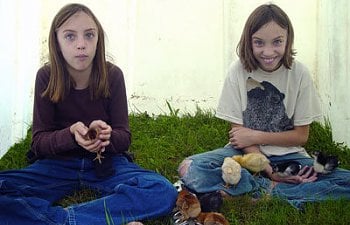 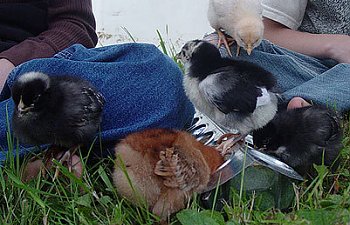 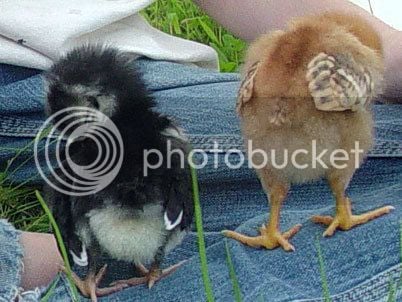 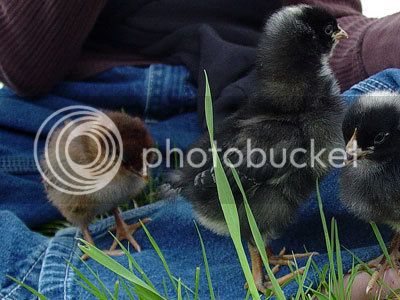 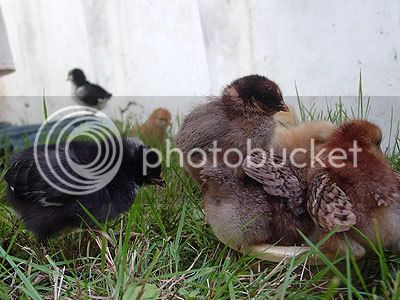 i elected to offer grit to the chicks early so that we could do things like these outings in fine weather.

meanwhile, in the basement, they started flying. 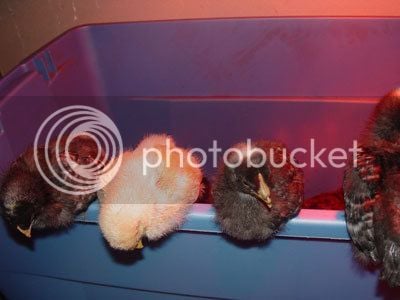 the barred rocks and one of the buffs have always been the friendliest. none but the partridge rocks are anything but very tame, but these are the ones that come for attention. these and our little surprise: 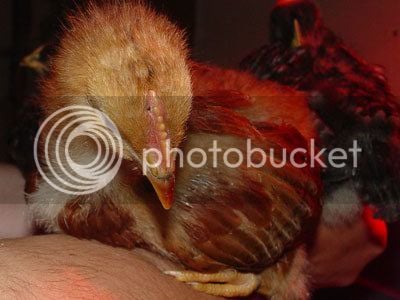 i am rooster! that's right, one of our rhode island red pullets turned out to be a cockerel. if any of the breeds were going to spawn a mr. man, i wouldn't have chosen the reds, but such is life. this is bob and he's a right nosy parker. he would fly up to the edge of the brooder, then fuss and stomp and whine until i would hold out my hand for him to roost on, then he'd take a little nap. 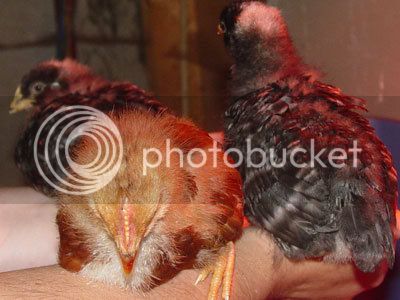 and he wasn't the only one. 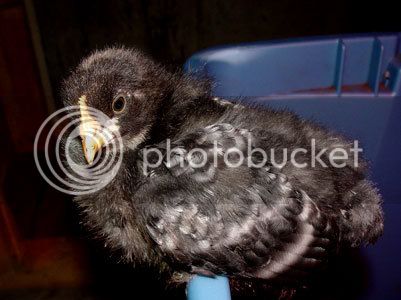 she's always as close to humans as she can get, including up on their shoulders. she's the prettiest of the barred rocks now that she's fully feathered, which i'll show in my next update.

behind again, but putting that coop together has been an all-summer project for the carpenterially disinclined. they were crowding in the brooder by four weeks old and they weren't picking at each other, but i didn't want to get to that point. the coop wasn't ready for them, but i moved them out there anyway. i put a long half sheet of plywood up to block off one corner for them, then temporarily tacked up some hex wire over that to a height of four feet. it was highly less than ideal, but gave them lots of room to dash about acting crazy.

the following weekend, we tossed them out into the modified calf hutch and got to work framing the division between the chicken part and the human part. that took an afternoon between the carpentry and then putting up hex wire, but it came out well and they had no idea what to do with all that space. there was lots of 100mph racing around, screaming, and dust bathing. good stuff.

these pictures are not recent, but contemporary with the framing of the dividing wall. 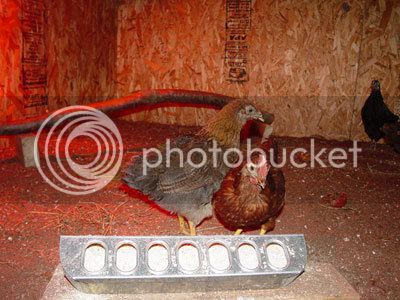 mom, this feeder is too small. get thee to agway to get us a bigger one. the way to a rooster's heart is through is stomach, verily. the only time he stops eating is when he's sleeping. i'm still not recommending those partridge rocks to a newbie. what a bunch of crazy women. 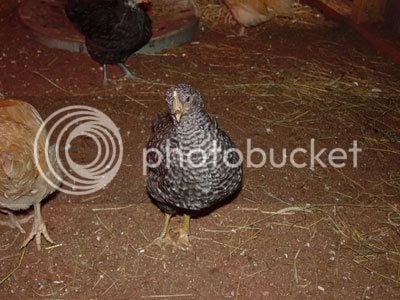 there's my little pet peanut again. aww. she's such a good girl, and pretty, too. the flooring is peat moss, which is fantastic, except i can not love the dust it makes. that hay is stuff they picked out of felicity's cage, which i had sitting on the floor in there for a bit to get the big hen accustomed to the little ones. she's not much bothered by them and only lunges at them when they get up in her grill. she's a good lady. she'd be a better lady if she'd quit with the stupid moulting, but that's a different story. 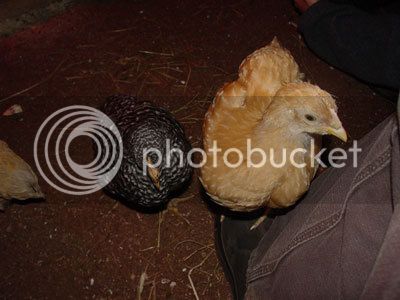 i read those posts from the poor chicken owners whose chicks don't like them and think how lucky they are. i can't even photograph mine because they want to be in my lap all the time. that's my foot on the right and a line of biddies waiting to hop up onto my knee. these two are peanut and goldberry, two of the usual offenders. 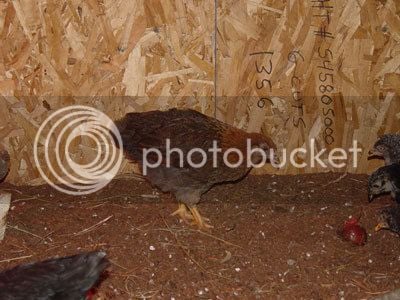 we shall stalk the killer tomato! do you think they'll learn math from those numbers scrawled on the particle board? paint is scheduled for next summer.

mr. bob mcroosterpants has started crowing this week. seven weeks old and all grown up. i haven't heard it yet because he doesn't do it when i'm around. maybe he thinks i'm the big rooster in this flock. the rest of my family tells me it's pathetic, but i'm sure he'll get it right with time.