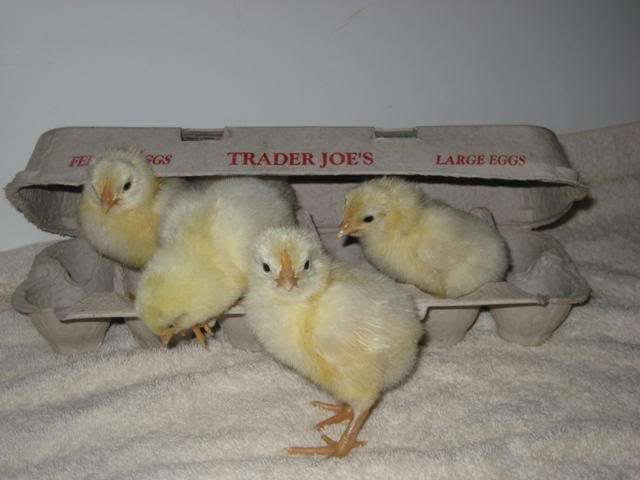 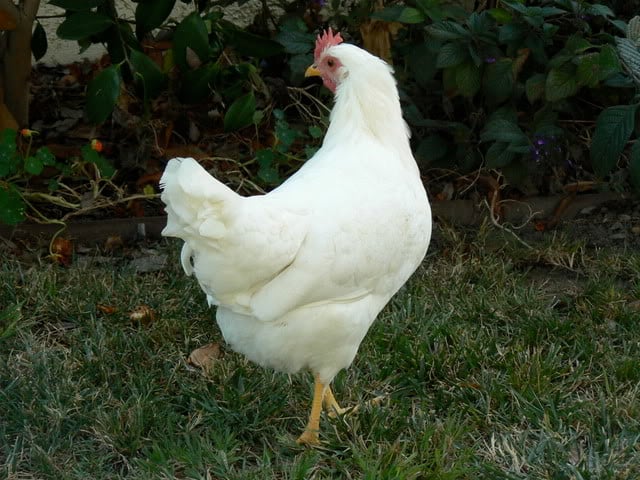 
We ordered chicks from a hatchery. But my 8 year old daughter wanted them from eggs to get to see chicks hatch. We live in the city and no one that keeps hens has fertile eggs around here. I told her how I read about an experiment on BYC with eggs purchased at a store that after incubation managed to hatch out a chick. She thought that sounded like a great project.

So for fun, she built an incubator with my help on the scavenging of parts. She loves to create all sorts of stuff. Four days were spent getting the right temp and humidity using water trays and adding holes.

Well, one Saturday we drove to 4 local natural food stores trying to find the most recently packed grocery store eggs. We ended up with Trader Joes white Fertile eggs and brown Fertile eggs from Sprouts.

The reason I chose this project is because my mom was buying some chicks. We built an Incubator and put in 24 fertile eggs. There were 7 or 8 eggs that developed. 6 eggs stopped developing, But 1 hatched.

I think that if fertile eggs are incubated they can hatch.
Research

Inside an egg many things can go wrong. But none of these can happen if an egg isn’t incubated. That’s because the egg hasn’t developed. A bacterial ring can mean that a developing chick died. A blood ring is another kind of bacterial ring.
Also an egg needs things to hatch. An egg needs good humidity and temperature. If an egg was on the shelf in the box too long it won’t develop. It usually takes 3 weeks for an egg to hatch.
Then of course the eggs could still die at the end. When we tested the eggs the white eggs were more successful than the brown ones. The egg that we hatched was a white egg but in the second batch a brown egg hatched.
In this science experiment I learned that grocery store eggs could hatch. I had a lot of fun with this experiment. My mom said we might get to do it again!

ÿ Incubator
ÿ Thremometer
ÿ Hygrometer
ÿ sponges
ÿ At least 1 carton eggs, preferably labeled "Fertile" from the store
ÿ maglight Flashlight
ÿ A dark room or a room with a light that can be turned off all the way
ÿ A place to keep all hatched chicks called a brooder with a heat lamp
ÿ Feed and water
ÿ Jars or cans to hold the feed and water 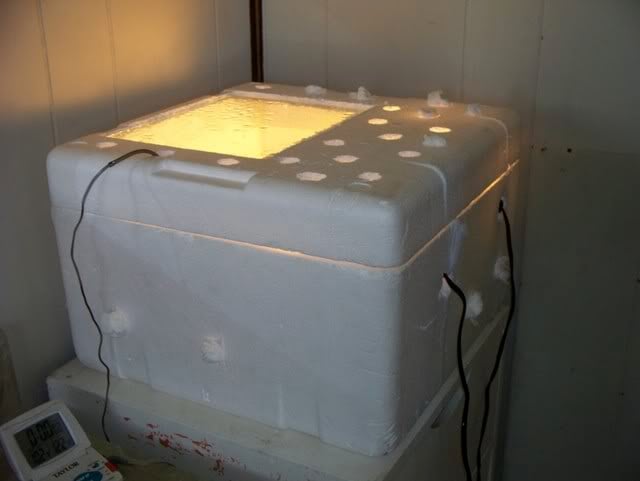 Procedure
1. Build or buy incubator.
2. Purchase fertile eggs and mark top and bottom for turning
3. Put eggs in incubator
4. Candle eggs with flashlight.
5.Check for pips
6.If you see a pip then watch and see if it (the hole) is getting bigger.
7.If a chick hatches, then keep it in the incubator for about an hour.
8. Take the chick out.
9. Keep the chick, sell it or give it away.

We looked up how the packing code is formatted. We learned how to read the codes before going shopping for the eggs. The first 3 numbers are the day of the year of packing. i.e. 008 = January 8th, 035 = February 4th, 365 = December 31. The other date of the code is the use by date. 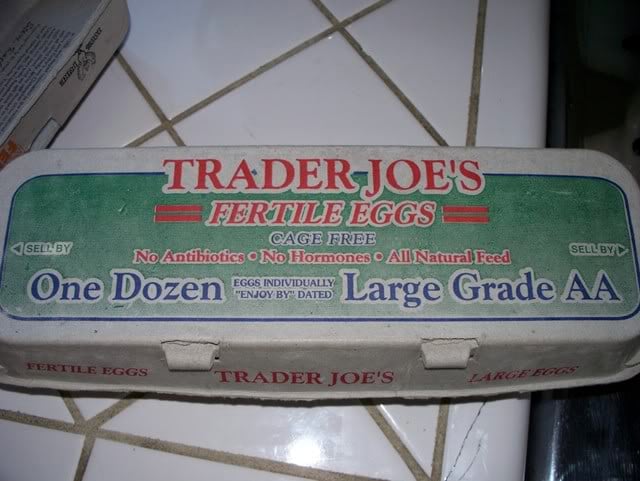 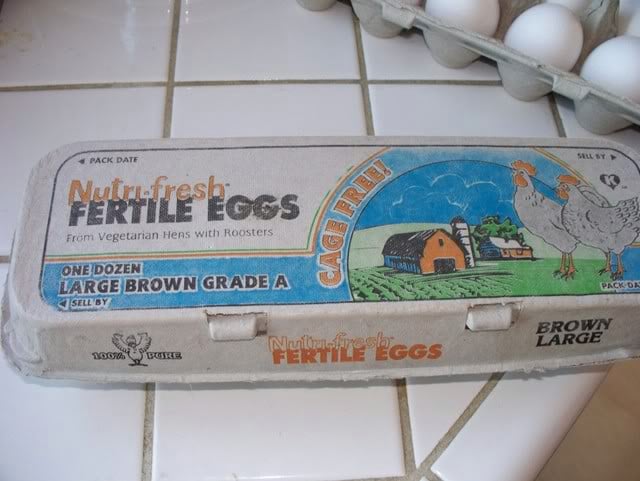 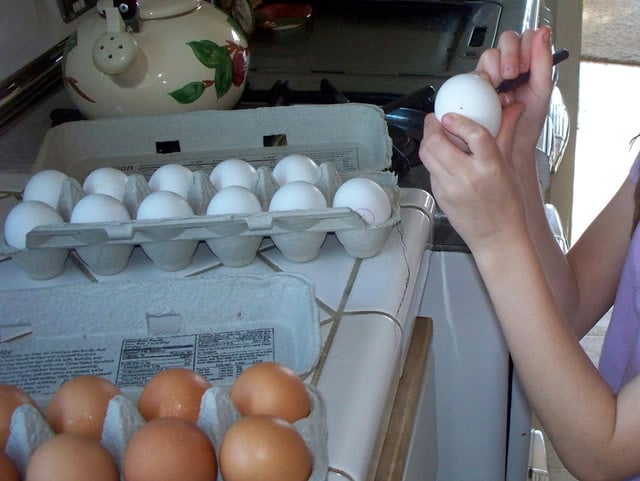 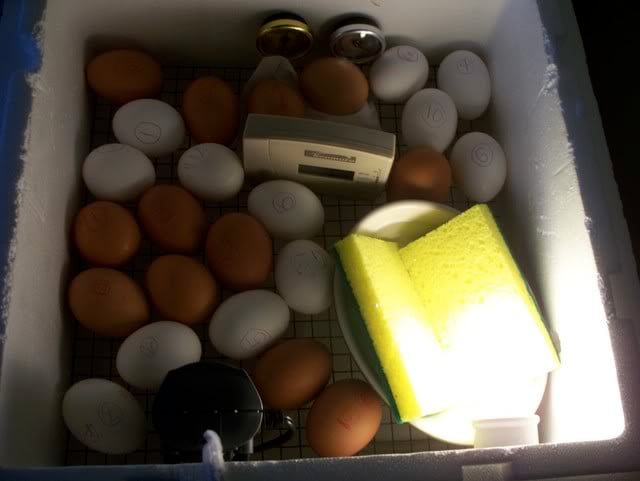 1/20/09 Nutri Fresh none developed. We threw them all out on 1/20/08.
Second box of Brown eggs added to incubator.
Nutri-Fresh Fertile eggs by Chino Valley Ranchers. 6 days old /pack code 017

1/30/2009
Trader Joes: 6 out of the original 9 that were fertilized still developing and in the incubator. When candled last night, 3 are dark for sure, 1 pretty dark, and two are probably 2 or 3 days growth behind the others. We had opened the 3 eggs we took out; they did develop a little, but stopped early on, between 5 and 8 days.
Nutri Fresh 6 developing

2/26/2009 Nutri Fresh chick turned out to be a rooster. Sent to farm in Newberry springs. 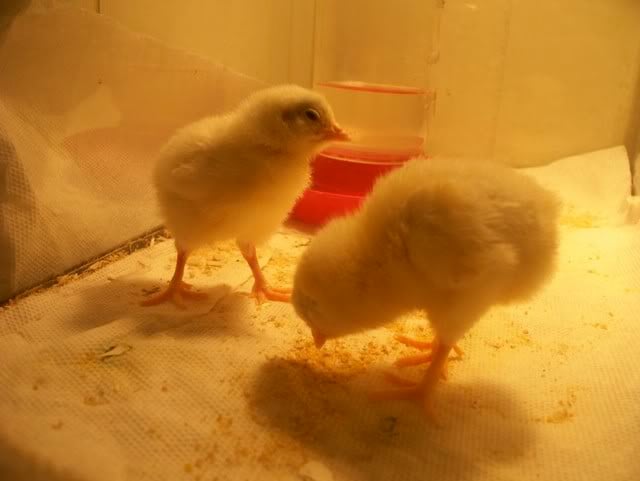 Here is the thread where we found the images we used to learn how to compare:
https://www.backyardchickens.com/forum/viewtopic.php?id=16008 “The first picture is an INfertile egg. The next two are fertile eggs at slightly different stages, but both freshly laid. Usually, you look for the bullseye/donut appearance, but there are different stages of development of even freshly laid eggs and the two last pictures demonstrate that. This is caused by cells in the center of the blastoderm dying off and leaving a cleared out area, making that bullseye appearance.”


Results
Trader Joe's has the highest fertility rate at 75% and this is based on 3 dozen.
Whole foods fertile brown eggs and it had 0%, 1 dozen ,and we aren't sure why.
Nurti-fresh Chino Valley Ranchers has had 58% based on 3 boxes.
The farmers market eggs had 50% so far (based on 4 eggs) for a comparison.
Cage Free and Free Range Hickman eggs had 0% 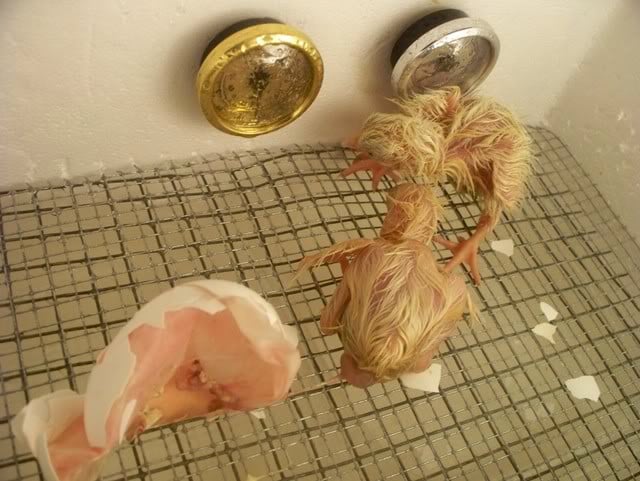 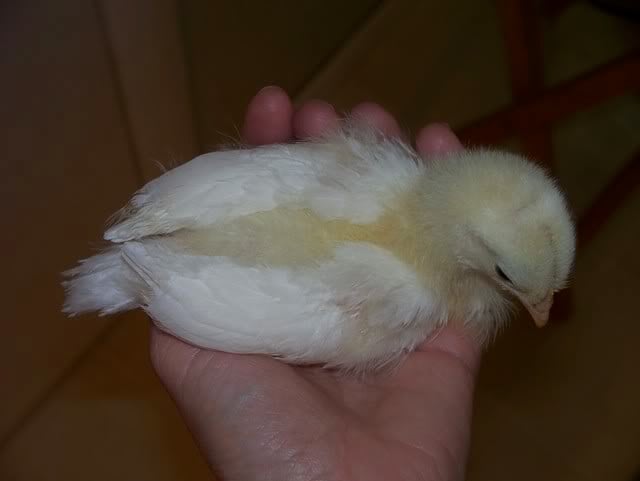 I really enjoyed this project and the only thing I would change is we would buy an incubator rather than build one.

From this project I learned that you can’t hatch just any egg and you can’t just leave it out. I also learned about what’s on the inside of an egg and about chickens.

This year my science project was on if grocery store eggs can hatch or not. And it worked! We hatched a white egg that is a Leghorn that is now our pet hen. 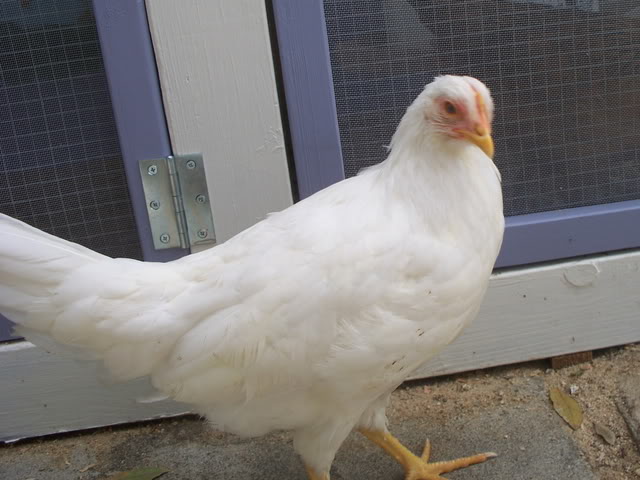 Spekledhen. (09/07/2007) Chicken Behaviors and Egglaying » How to Tell a Fertile vs Infertile Egg. Message posted to https://www.backyardchickens.com/forum/viewtopic.php?id=16008

Sylvia A. Johnson. Inside An Egg. 2003. Lerner Publishing Group.

Update: At 19 weeks + 1 day old she laid her first egg. It was a white 1.3 oz egg. Her eggs are now consistently about 2.0 to 2.2 oz. She is sweet and gentle with the kids. While she started out very quiet, as she got close to laying she got pretty vocal. She is a leghorn hybrid and we believe she is from a Hyline W-36 hen's egg due to her docile nature. Joey has become our pet chicken and family favorite. My son was selected to represent his class at the district science fair and he was very excited about participating at it. Joey is by far our noisiest chicken, but due the fact she is easy going with people, lets the kids hold and bathe her, and lays large and extra large eggs almost daily, she is a great pet chicken. 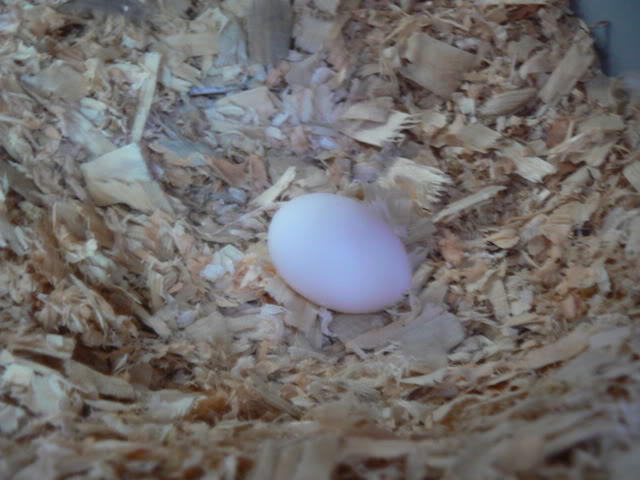 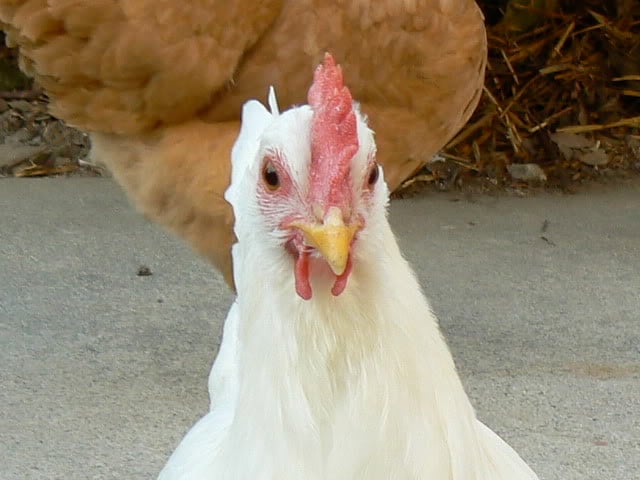 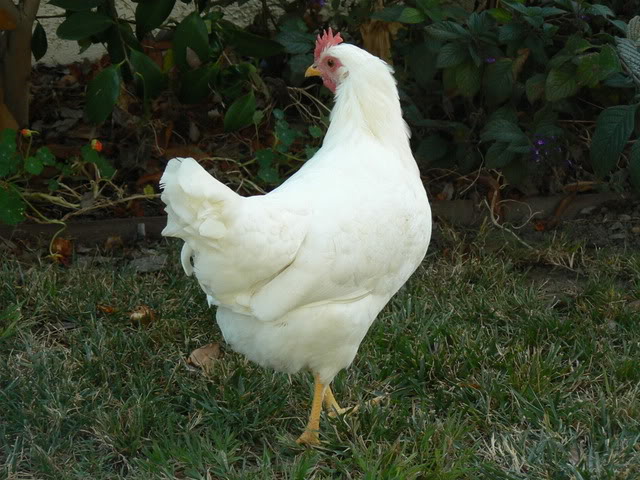 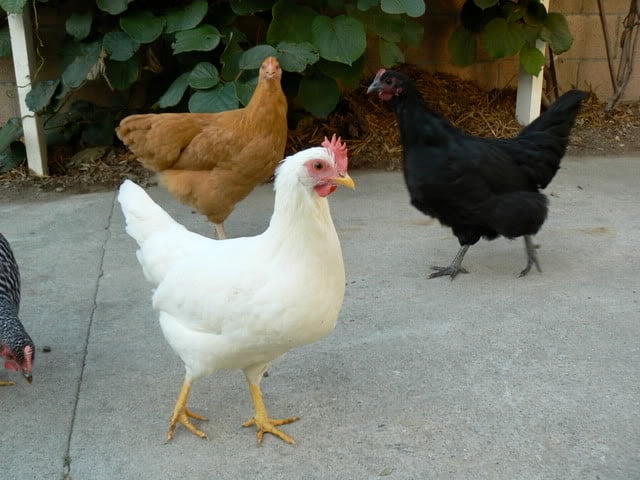