Article Gallery
Leave a rating
After careful consideration, I've decided to make this page about the great home-made chicken coop and arc my brother designed after looking at hundreds of options out there, specifically built for our yards (we built two identical coops). I hope you enjoy the page and appreciate that hard work can save you tons of money. We built my coop and run for approximately $350 in the Spring of 2011. Full plans as much as we had them, are available on my blog from February 9, 2011, though here is the front. 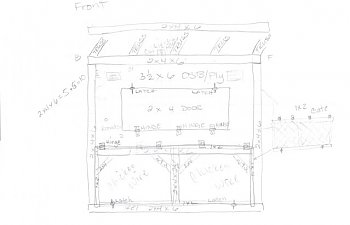 We started with two simple stud walls. I went 2x3s to cut down on some of the weight. My Farther-in-Law is a retired master carpenter, so we deferred to his wisdom. 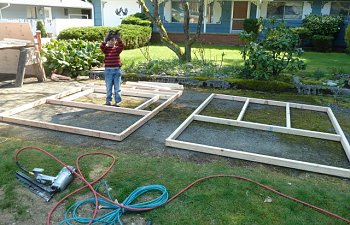 Slapping them together was easy. The idea was to be able to take it apart if needed. That idea faded quickly though. 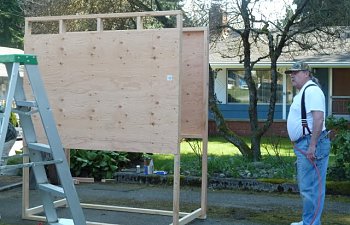 The coop, though in the very early stages, was coming along. You can already see my take on the ventilation issue. With a change to a sloped shed-style roof rather than a gable-style, I couldn't have a gable vent to let the heat and smell out.
I got to design my own roof on the fly since we abandoned the gable-style. As the coop was 3x6, I went an 8x6 roof. Sorry this pic is dark, we worked like mad men all day long, scrambling to get the roof on before the rains hit. A common occurence in the Pacific Northwet. 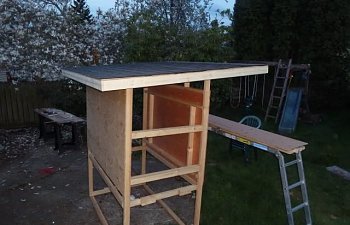 You can see that the front side where the scaffold is set up, sticks out much farther than the back. That way, when I'm cleaning out the coop during the Fall and Winter, I'm somewhat protected from the rain.
I'm pretty happy that despite spending more than the $200 I wanted on the coop, I could at least make the nesting boxes out of repurposed 2x2s I pulled from another project. The two upper cross beams in the picture above is the framework to hang the nesting box. 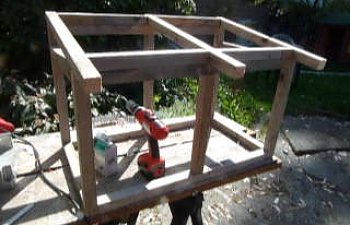 Next up was more siding and cutting out holes for doors, vents and nesting boxes. It was really coming together that day. 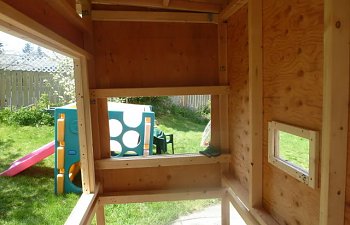 Now you can see the size of the clean-out door and how I planned to handle the air flow It's also showing off the approximately 20 SF that will be the home of the four hens at night, in the early morning and half their home if it's way too wet or cold to go out. Actually since the floor's not in, you can see the mini-run underneath the coop that gives us about 40 SF total, which makes me feel better in case they're cooped up all day in their coop and mini-run on the foulest of days.
Next up was putting in the floor, framing up the chicken door, putting the plexi-glass window in the door, installing the removable roost and building the chicken ramp. Important details all. 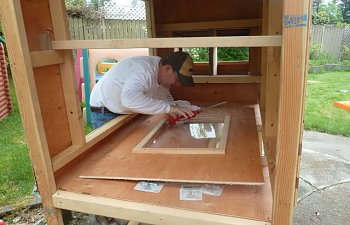 Finally it was time to paint. Again I used what I had on hand. I bought too much trim paint when I painted my house last fall, so it went on the coop, inside and out. Not a horrible color. 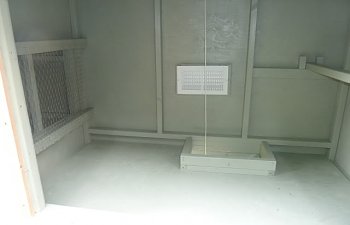 In the picture above you can see the louver vent is in, the pulley system for the chicken door is installed and I even had up the chicken wire over the nesting boxes so they hens don't sleep in there. I want to make sure they don't use them until they begin laying eggs.
When it was nearly all done, it was time to move it from the patio to it's final resting spot. I'd like to be able to say moving it was easy, but it wasn't. Trying to put temporary wheels on it failed when it fell over due to an unbalanced car jack. Once we got the awkward top-heavy, beast righted, it wasn't hard to move it into place. 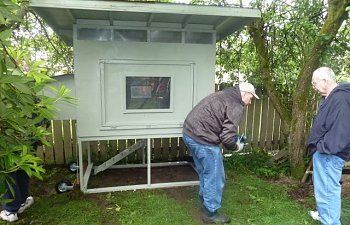 From there, it was as simple as removing the wheels and installing the hardware cloth and the doors to the run. 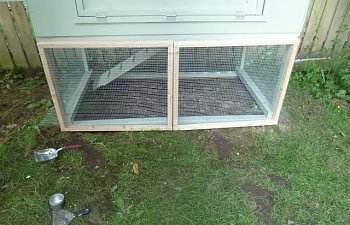 And here are my chicks exploring their new home (taken through the window). 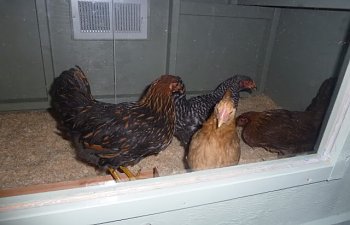 Now for my arc. I like the term better than tractor, but whatever you call it, I wanted something big and light. Again I went 2x2s and decided on a triangle shape. Simple and cheap. 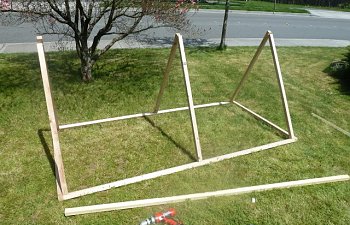 I started with a simple 4x8 rectangle and attached 4 foot boards at the ends and the middle. I know it only gives me 32 SF of space for my 4 birds, but as the plan is to move them to a new spot in the yard every day, I think I'll be ok. I couldn't easily go longer than 8 feet because of the availability of lumber (they don't make cheap 2x2s longer than 8 feet). 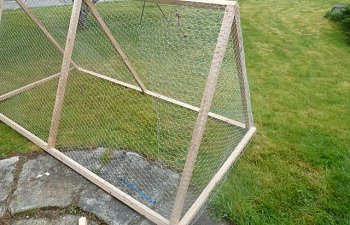 I regret putting chicken wire over the frame as it rusts so fast in our wet climate. I knew I didn't care about predator protection as they'll never be out in this overnight and we've got no daytime predators. I will likely replace the chicken wire with something galvanized but less expensive than hardware cloth. Hopefully something that comes in 4 foot lengths. Anyway, this arc is a work in progress. Above you can see I simply bent a piece of wire around the open side to get the girls in and out. I used it for about a month before I found the time to put the door on, but I did throw a few platforms in there for food and water, a roost and toss a tarp over for rain and sun protection. 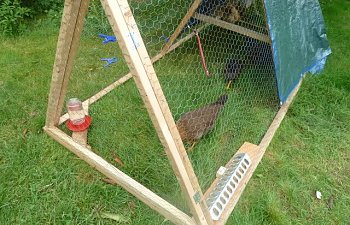 Eventually there will be either siding on the back third or maybe corrugated panels for added light. Either way, in the top of the back will be a small nesting box to allow for the 25 hour laying cycle to have them lay in their arc during the day. It will be accessed from the top triangle in the back. I haven't built it yet because they're not laying and I don't want to make this any heavier than necessary. I move the girls in and out alone most of the time, and I don't think I want it on wheels.
I hope you've enjoyed seeing how I built both my coop and run for $350 and change. Hard work is the answer. You pay for convenience.