Living the good life in the cedar swamps of north east Michigan ​
These were my 5 original ducks. I didn't name them although my husband called the pekin l'Orange. I had them a couple years then a mink moved into the area so I removed my ducks and their offspring to my father-in-law's farm. Unfortunately, they met their demise there a few months later when something broken into the pen one night . (The mink is now an ex-mink!) I then changed to Muscovy ducks. I prefer them now as they don't hang at the pond as much and so didn't dirty it up like my puddle ducks did. 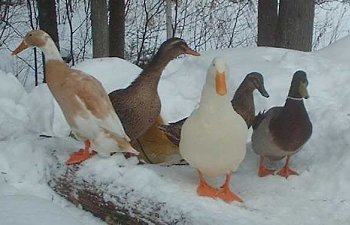 There was a little training required to make the ducks and dogs live in harmony, this is Luna before she was completely trained. Rocket drooled a lot but has since gotten over it. 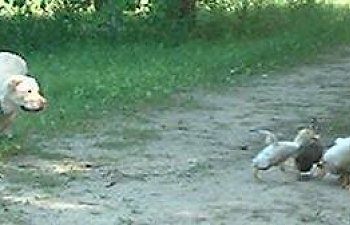 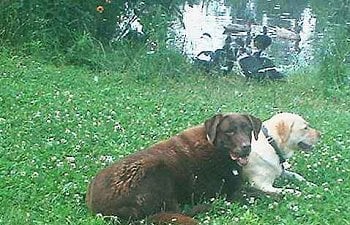 My dogs were very well behaved once Luna was trained. Rocket, my chocolate lab was always laid back and friendly. I lost Rocket in September 2010 to liver cancer. In March of 2011 I picked out a new puppy at a shelter and named him Ziggy. He's half lab and half beagle. Ziggy is also very well behaved around the birds. This is his photo shortly after I brought him home, he's about 2.5 months old. 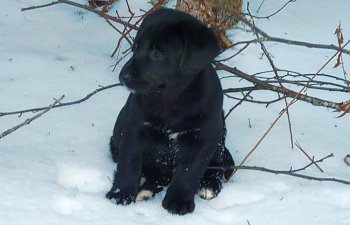 My husband turned out to be allergic to duck eggs which turned me onto chickens. One spring, a couple years ago I got my first chicks and ended up with 2 pearl guineas and 4 Plymouth barred rocks, of which only one was a pullet. Here's a picture of the Mr Chicken gang and Luna in late summer 2008. 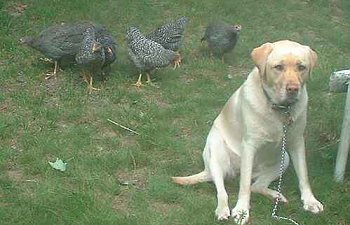 ​
And here is a photo of the coop and run my dear, sweet, wonderful husband built for me before those chicks were 6 weeks old.
​ 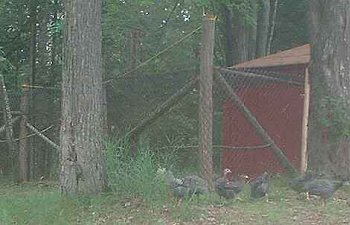 6x8 foot dirt floor coop with attached pen.
​
Since then all those birds are gone and I currently have 5 guineas, a pair of muscovy ducks, the female already sitting on a clutch of 13 in january no less! I have 25 chicks scheduled to arrive in June 2012. I'll probably pick up some pearl guineas this year as well.