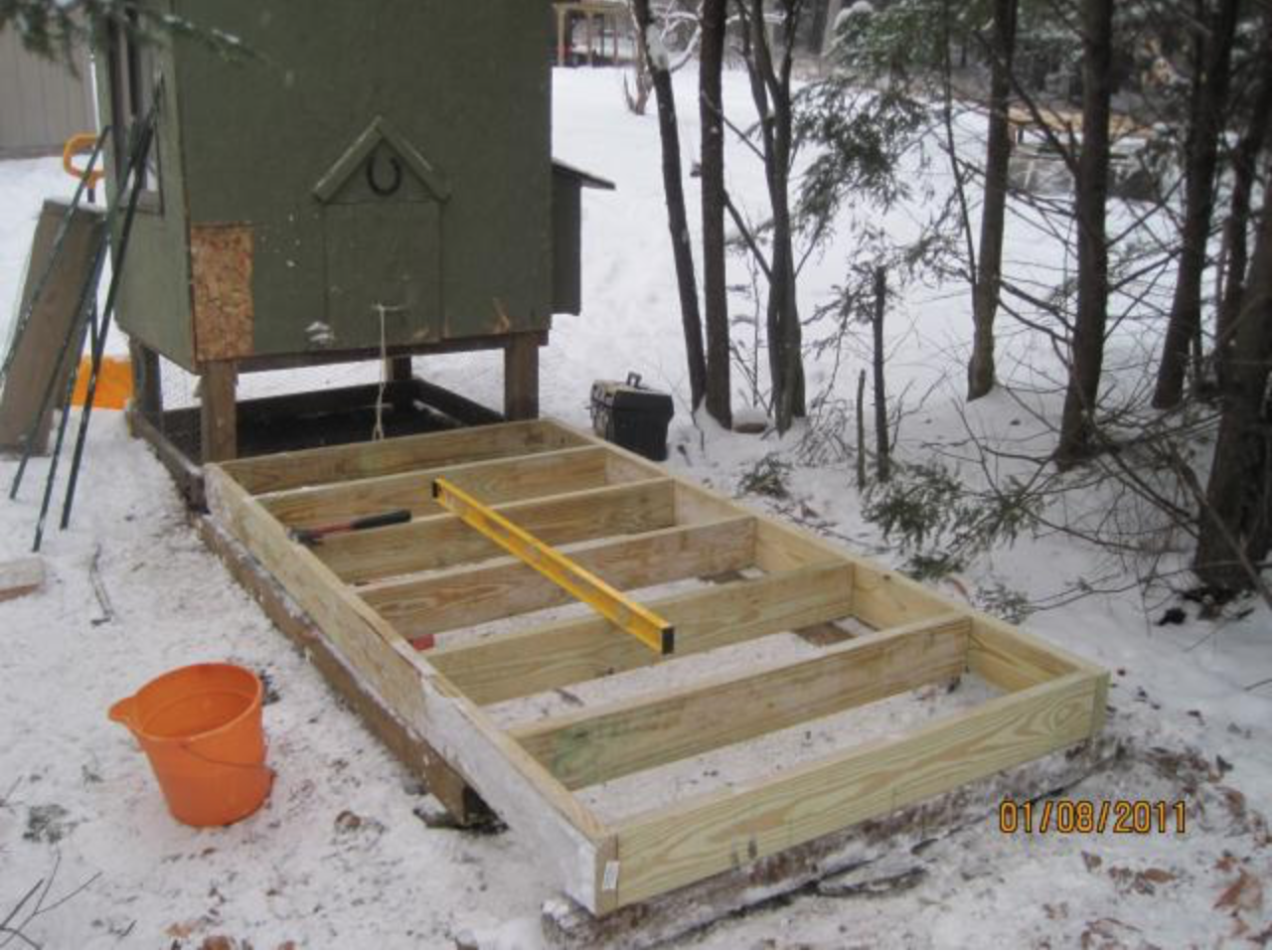 Recently I hatched 11 chicks. 11 chicks call for a new coop. Unfortunately it is winter here in Northern PA. That means it's COLD! The chicks won't stop growing, so I have to start building. After doing some quick math calculations, I figured that 4 x 8 would be big enough. I am planning on haveing them free range most of the time. I built this knowning I did have a whole lot of random scrap wood, and I wanted it to look nice. I ended up buying most of the materials for it. I chose the 4 x 8 x 8 to reduce waste of lumber. Since 2 x 4's come in 8 foot sections, i chose them to reduce waste there. Any plywood/OSB comes in 4 x 8 foot pieces. I could easily have made it an 8 x 8 with my guidelines I set, but that would have cost more.
After writing up the plans and thinking over it for a week, we went to the lumber store and made some purchases. Over $200 dollars this has cost so far. I will have a price write up later down the page. After getting the lumber, I went right to work. I did have chicks waiting to get in you know.
The Plans:
I don't have a fancy pants scanner, so I took the picture of the plans in 2 shots... Groundbreaking:
Starting in Mid January, I quickly leveled up my 4x4 base posts to get the framing for the floor done. I also had to jack the existing coop up a few inches, there was a bad lean on it. I wanted to make everything as sqaure as possible. Completely these tasks took a few hours. Unfortunately, it gets dark at 5 pm here. My day was over. However, the next day I got the wall framing done, and started the OSB. Over the course of working 1 hour a day for the next week, I get the rest of the OSB hung.

The coop you see behind the frame of the floor is my existing 4x4 coop. I needed a bigger coop so I made the addition. Where the new addition is going used to be the run for the older chickens. However, I am letting them free range for now. I put the ramp in the door as you see just as a temporary thing. Here it is with the OSB all up. The front, or side really. What you see is the opening for the door, nest box, and window. Another view: The back with the pop door Inside shot. The OSB piece that has the triangle cut out, the one where it meets the painted section: is not attached. I was using that as an example that failed. Roof/Finishing Touches:
The dummy I am forgot to take pictures of the rafters before I put the sheathing up. I guess I was in a rush. Because most days in Northern PA's January is a high of 20 something, I have to wait to put up the shingles and paint it. Hopefully a nice day will come up in March. For now I put plastic on the ridge to prevent snow from falling in. I have yet to put in roosts Nestbox: Outside looking in. Right now I have an extension cord running in. I plan to wire it soon. The box is covered with plastic on the inside for now to keep out drafts/ discourage chickens from making a mess in there. Right now he/she is the only one in here. My other 10 are not old enough to be out in the cold yet. That explains why I didn't rush to put the roosts in lol. Come back and show us what it ending up looking like and where you put the roosts!
Read more…

Hey kiddo! Looks GREAT! I'm gonna need help getting mine together, maybe you can help your old Auntie!