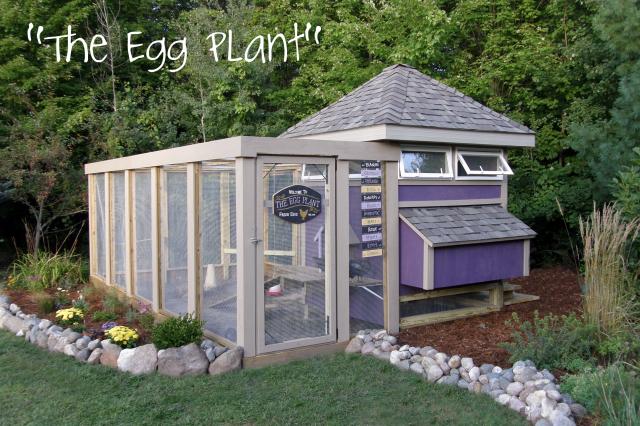 Finally our Coop, "The Egg Plant" is Finished, except for sand in the run. Every year my husband builds me something for my birthday. Last year I asked for a chicken coop. He told me absolutely NOT. He must have remembered because this year he brought home a poultry catalog and told me to pick out 12 chicks. Everyone got involved and with the help of this site and all of you chicken experts we chose 3 BR, 3BO, 3 SLW & 3EE. They arrived July 7th and DH came home with his truck full of wood and a coop plan he bought on the internet. Coop construction was to begin except after seeing all of your amazing coops I hated the plan he picked. I suggested we just have fun and enjoy the process, no plan would be needed. Needless to say our coop is NOTHING like what I had invisioned. I wanted pretty he wanted function. What we ended up with is a compromise. Thank you to all of you who posted your coops. They were my inspiration!
YEA! We have begun. We have tossed out the original plan plan by now. I have convinced my husband to put windows on all sides.
We just moved the header up, which also increase the head space and made it possible to stand inside. A big plus. We are hoping to include a cupola at some point.
4 Nesting boxes are built. DH wanted to put the same addition on the opposite side for storage but I convinced him not to.
I was concerned that at our slow pace we'd never get this coop done. It would have been handy for feed storage.
We insulated the coop floor, walls, ceiling & nesting boxes with fiberglass insulation as we have very cold winters.
It also helps keep the coop cool in the summer too. Our run was designed by my husband. He put in the treated 4x4's while I wasn't home to give my opinion

.
The front wall extends down to allow my husband to attach a "front porch" -his idea.
For the Run he wanted to be able to walk & "Fly" around comfortably.
Around the bottom he burried 3 deep, treated 2x8's and then attached
hardware cloth out just below the soil to discourage digging.
He covered the front posts with cedar because he thought it looked nicer. To attach the hardware cloth he ripped a treated 2x4 in half and screwed it to the 4x4 and made a frame. We attached the hardware cloth to the frame with screws and washers then attached the other half of the 2x4 to sandwhich the hardware cloth.
We did the run roof/ceiling in the same manner. *note* The Girl's LOVE the space UNDER their coop. They love the shade when it's hot and now that it is getting cold and rainy/snowy they escape the bad weather under there too. I'll never understand why they won't go inside their home when it storms but they do go under it for shelter. Inside the run he placed the scrap 4x4's in the corners as roosts. Window are cover with 1/4" hardware cloth. We put a little roof over the pop door to keep the rain out and snow from piling in front
of the door. I love this! Thank you for posting the instructions too! We are about to move into a rental and they have been very specific about what they do and don’t want at their house.... it took some convincing to get them to let us have chickens.... but I think something close to this will make them Very happy!
Lovely set up. Suddenly I’m a big fan of purple!
Beautiful coop, love the cupola and front porch.
Read more…

So adorable!
I think this has to be my favorite coop! I love the color, I love the details and I love that it fits right into your landscaping as if it's always been there!
Lovely coop! Love the color, the name & the porch!
I want one !!!! Great job both of you
Wow! Amazing! Your DH has exceptional building talents, and the landscaping looks beautiful.
Thank you all for the kind words. I didn't realized any of you had posted, I am still getting used to BYC's new format. These 12 girl's have become very special to us.
This is absolutely GORGEOUS!!! All the special little touches make it even better....the list of the chickie's names, plantings with river rock bed edging, nice colors, the doorway covering....Really a great job. Thanks for sharing!
This coop made me smile - love it!
Super cute!!!! The challenge at my house is my boyfriend wants to build it to work and I want to build it to work and look good! Did painting the inside help? Does poop get really messy on the walls or anything? I need to choose a color to paint ours but not sure what to expect since this is our first year. We have 6 chickens.
I'm jealous, beautiful coop!
A+ for craftsmanship and design!
This is spectacular. I'd say that's a pretty nice birthday present! He is a very good craftsman and I think even the hens know it.
Thank you, He is an amazing husband. I am very lucky and blessed.
Absolutely beautiful! I'd love to have a chicken home like that.
absolutely top drawer, you make a good team!!
I love it. I wish my husband could build stuff.
Happy to have found your coop on BYC! We are building something very similar to yours, but having trouble
locating windows that open like yours do. Where did you get them? Thanks for any suggestions. Also, love
how you painted your coop and how the landscaping blends right in. Lucky birds!
I agree with all the kind words above, I wish I was as handy as you, lol
WOW! I love it! I need a little smaller, but I'll keep this in mind for inspiration! Thank you soooo much for sharing!!!!
What a beautiful coop!