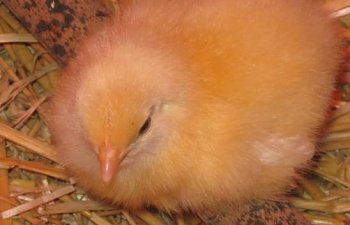 I didn't know a whole lot about chickens (even less than I do now) and didn't think anything of it that all they had were yellow chicks. After all... all chicks are yellow, right? So, I picked out six of them and took them home. 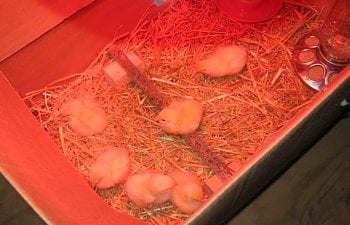 We made a ramshackle brooder out of a cardboard box, with straw for bedding and a red heat lamp. My husband, Brian, stuck a thermometer in the side of the box so we could monitor the temp. It worked well and the chicks grew rapidly. 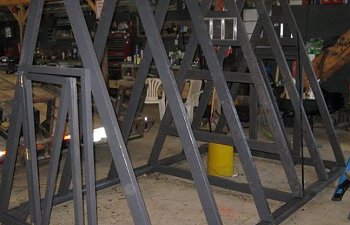 Brian soon started work on a coop for them. It turned out to be quite the project! (He likes to complain about it, but I know he doesn't really mind doing it for me.)

April 15, 2009: When we'd had the chicks for one week, I stopped by TSC to pick up something else, and I heard a TON of peeping coming from the back of the store where their brooders were. Of course I had to go and investigate, and I was gobsmacked to see all of the different varieties of chicks! Red ones, black ones, spotted ones, striped ones!! I wanted some of those! Oh, if I would have only waited a week!! 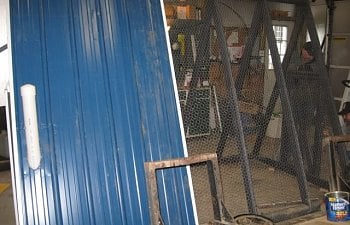 I mentioned it to my husband and he said the coop he was building was plenty big enough for a dozen chickens. The plans he was working from had actually said so (and he had even made it bigger than what the plan called for.) He also said he had to go back to town that next day, April 16th, to get some things and he would get some more chicks for me if I told him what I wanted. "I want a variety," I told him. Just get six of as many different kinds as you can." 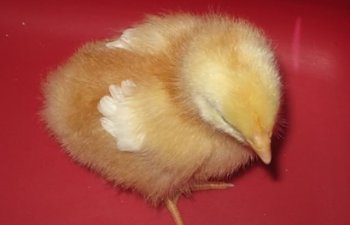 April 16, 2009: Bless him, he came home with six of the SAME variety. But at least they were different than what I had already! These new babies were Red Star sex-linked chicks. My husband said that a lot of the ones I had seen must have been sold out already, because he didn't see any black or spotted ones in with the assorted pullets when he was there. 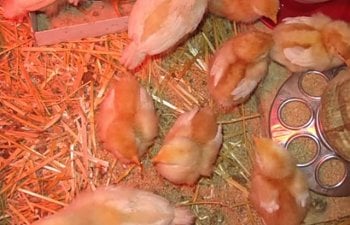 So then I had a dozen babies... six white Leghorns and six Red Stars. They needed a bigger box!

April 22, 2009: I still never stopped wanting more breeds of chickens. I love the way Barred Rock chickens look and Rhode Island Reds, too. It's not that I didn't like my Leghorns and Red Stars... because I do! I love them too! I just wanted a nice variety. The way I figured it, I would have these laying hens for at least three years... possibly longer... and I wanted to get exactly what I wanted to start with. 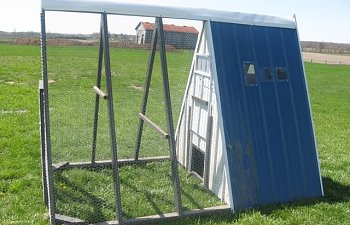 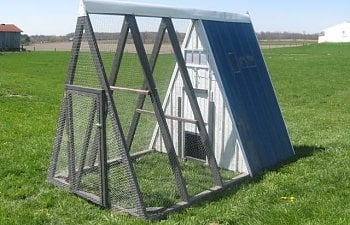 My husband said the coop would accomodate 18 chickens, but I didn't agree. It might hold that many, sure, but in my opinion, they would be overcrowded. I did still want the assortment of breeds, however, and Brian rolled his eyes but was agreeable to me ordering some more babies and selling the extras. He found a neighbor who wants to buy them (she wants them when they get a little older, though... and don't have to be under a heat lamp because she doesn't have one.) That should work out fine, because my new babies won't ship until May 11.
Yes, I ordered six chicks from MyPetChicken.com. Three Barred Rock pullets and three Rhode Island Red pullets. I should have a nice variety in my coop then!
April 25, 2009: we put the chicks out in their coop today! Brian ran the heat lamp out there and we're going to keep the door to the run closed for now. They seem to be enjoying the extra space!
April 26, 2009: we opened the door to the run for a few hours when the winds died down. It was nearly 86 degrees today and HOT. Still, the chicks didn't seem too sure about the whole thing and never did come out into the run, so we just closed it back up.
April 27, 2009: a very sad day. I went out to check the chicks this morning as usual, and saw one lying on the floor of the coop... not moving and peeping painfully. The other chicks had a bit of a "shell-shocked" look about them and were all crowded as far away from the chick on the floor as they could get. I reached in to pick up the prone chick and saw her leg was all twisted under her and bloody. I figure she had flown/jumped/fallen off of one of the high perches in the coop and injured herself. We culled her to put her out of her misery (there was no way that leg could be set and due to the bleeding from the vent I assume there were internal injuries as well) and now I'm worried that we put them in the coop too soon. I really hope this was only a freak accident and it doesn't happen again.
April 30, 2009: There haven't been any more accidents, thank Goodness. I put in a ramp for the chicks to use to get up to the higher perches and cushioned the floor of the coop with about a 5" layer of straw.
We've also decided we need a bigger coop. Brian's a bit miffed at that (I don't blame him), and I feel terrible that he put all that work into what he made and it's going to be too small for what we are wanting. He's being a really good sport about it though. We're pretty confident we'll be able to sell the A-frame to someone with a smaller flock or use it for a broody hen or perhaps an accidental roo (jury's still out on whether I'll get one, right? LOL!) We're still planning on fencing in a large area (around 20 X 50 feet or more) as pasture for the chickens and we're just going to put a permanant henhouse in the pasture. It should be awesome!
I have to be patient, though... because we're in planting season right now and it MUST come first. The chickens are still small enough that they are not overcrowded yet, so it's not an immediate concern. I'm thinking in early to mid June... once planting is over and before haying starts... that's when Brian will build the fence and get the henhouse done.
The BEST news about us deciding to go ahead and have a large henhouse and pasture, is that I won't have to get rid of any of my chickens!! I'll be able to keep them all! Yay!!
May 5, 2009: I ordered MOAR CHICKZ. It's an addiction! I can't help it!! BUT... Brian did decide to make the chicken house even bigger and jokingly, he said, "If I build this for you, you damn well better get more chickens!" UMMMMM... OKAY!

I'll be getting a few light brown Leghorns, gold-laced Wyandottes, black Australorps, and I even ordered a few Phoenixes. My flock should be GORGEOUS..
It also dawned on me that fertilized eggs are not that bad. See, I had always thought the blood spot in eggs meant they were fertile. The blood spot grosses me out, so, therefore, the idea of fertile eggs grossed me out. However, I have found out that the blood spots have nothing to do with egg fertility; they are the result of a burst capillary in the hen's ovuduct. Actual fertile eggs that have not been incubated look hardly any different than non-fertile eggs.
So, with that knowledge, and also knowing that my girls will need some protection from predators in their pasture, I ordered a black Australorp roo. The Australorp roosters are reputed to be gentle in comparison to other roosters, so that was why I picked that breed. I have already given him a name. He will be called Elvis.
And also, the neighbor mentioned above still really wants some chickens. She's a nice old lady, and I think we'll just give her two Leghorns and three Red Stars later this summer. It'll serve two purposes... one, it'll make the neighbor happy, and two, it'll disturb the pecking order... hopefully enough so that when I introduce the new chicks to the flock, it won't be as hard on them.
May 12, 2009: I received my new babies from My Pet Chicken.com. I LOVE THEM SO MUCH. They are so cute and helpless and soft and fuzzy!
*apparently photobucket is down at the time I'm writing this... I will edit and add the pictures of the new babies when I can*
May 13, 2009: MyPetChicken is MADE OF AWESOME. They sent an e-mail notice to tell me that part of my order that I thought wouldn't ship until June 8 will be shipping the week of May 26! I guess they must have had some cancellations... so I will be getting the Australorps and the Phoenix chicks early!! YAY!!!