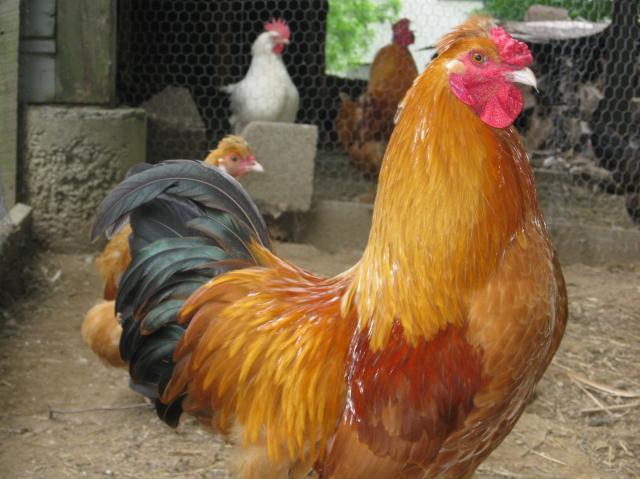 Cock fighting can be a difficult chicken behavior to deal with, especially when it involves beloved pets. Roosters don’t like to leave a good fight unresolved and will keep coming back to it every chance they get. Here are some tips for dealing with fighting roosters and some suggestions on how to restore the peace.

First Round
Cock fights can be pretty sudden. Sometimes I can’t even tell what set the combatants off; it’s like a switch was just flipped on. When a rooster is trying to be obvious and start a cock fight, he may start flapping his wings and crowing to the other rooster or trying to mate the hens. Generally, the challenged rooster will make a beeline for the challenger and the fight begins. Immediately, both birds become a mass of feathers, claws, and beaks.
The first reaction to this is to try to separate them, but this isn’t always a good idea. It is very unlikely that they will stop fighting for good. As soon as you leave, they will be back at it. It is best in these situations to let them try to decide pecking order while you are present. If the fight is over quickly and there is an obvious surrender from one of the roosters, then good. You should keep an eye on them, but they are probably ok now. The trick is: knowing when to let the fight continue and when to stop it. ​
Second Round
The biggest difference between an ok cock fight to establish pecking order and a fight to the death is in how the roosters are fighting. This is not easy to determine early in the fight (in the first five-ten minutes), but after about fifteen to twenty minutes the purpose of the fight should emerge. If one rooster looks like he’s losing, then the behavior of the stronger rooster should tell you whether or not these boys will be able to live together long term. If it is a fight to the death, the stronger rooster will be trying to seriously hurt the other rooster, not just make him surrender. If a surrendering rooster (a rooster who is making scared noises and running away) is being doggedly pursued by the victor as if the victor wants to continue the fight, this is also a sign that the coop isn’t big enough for the two of them. If both roosters keep going equally, their behavior toward each other as they get tired will tell you the same thing. If they look like they are going to keep going for a while and won’t give in until one of them is removed, then just separate them. It’s not worth it to see if the fight will end well at this point.
On the other hand, if a fight is just to establish pecking order, the roosters will fight viciously for a while, then one will surrender and run away. The victorious rooster may chase the loser for a little bit to establish his dominance, but he should content himself with scaring the loser and will not try to continue the fight. ​
Final Bell
To separate two fighting roosters, water is perfect. Reaching your hands in can result in bites and scratches intended for the opponent. Water from a hose or bucket often shocks them into separating far enough so that you can reach in and grab them. They may try to bite you when you are holding them. Don’t worry; they should stop. If they don’t, you still have to patch them up, so get someone else to hold them.
Blood. There will be a lot of it. Don’t panic. There is a lot of blood in head wounds, which will be the majority of what you have to deal with. This is regardless of the violence level of the fight. There may also be missing spurs, the stumps of which will also bleed profusely. Missing feathers and miscellaneous wing, leg, tail, or neck wounds may also be present. The first thing to do is to get a wet paper towel (warm water is best – have a clean bucket of warm water handy and a lot of paper towels) and wipe off the blood. This will help you determine what is serious and what isn’t. Work on the most serious wounds first. Styptic powder will stop bleeding from spurs (be generous). When used on the face, just be careful of the eyes and mouth. If you don’t have styptic power, normal kitchen flour can also work (again, be generous). Your roosters will be exhausted. Just put them somewhere apart from each other where they can rest. I have found that a warm, dry towel in a kennel will keep other curious chickens away from a tired rooster and will let him rest safely. Make sure they have water and food, but especially water. It is important that they are able to eat and drink when they feel up to it. That little body just spent an awful lot of energy. Check on them periodically to make sure that they are recovering. Be careful of eye wounds. If there are any wounds that look like more than just surface wounds, take the rooster to a vet. Even if a vet doesn’t have chicken experience, they know how to deal with wounds of a more serious nature and they have the right equipment in a sterile environment. ​
Why Let Roosters Fight?
Although no two cock fights are alike, these are some basic guidelines for determining whether or not to let a fight continue. You have to use your own judgment, though, as to when a fight is going too far.
Hen fights are quick and decisive. Hens will content themselves with a short pecking session before a pecking order is decided (bullying is another matter – often bestowed on the lowest in the pecking order). Roosters take a lot more convincing. We have three roosters living together in a small flock of hens. The head rooster is a big, burly Easter Egger, and the other two are smaller Buff Orpington/Silkie crosses. The head rooster established his dominance first, then the other two sorted things out between themselves. Cock fighting, while a frightening thing to watch, is a necessary part of the rooster pecking order. The fight only becomes serious when one rooster decides that he won’t put up with a beta rooster in the coop. Some roosters are like this. It’s not always possible to have roosters living in harmony. Usually, the rule is to have ten hens per rooster if you are going to have more than one. We have been very blessed in that our boys get along with fewer hens (without being hard on the hens). Although it is easy to react quickly when a cock fight breaks out, judging the seriousness and purpose of the fight can lead to a happy pecking order in a multi-rooster coop.
Reactions: Shagnasty66 and tjo804
About author

The Chickens' Maid
Thanks for reading through my article! Please PM me if you see any info that should be corrected or if you have any editing suggestions! I'm always trying to improve my writing, so any help is appreciated!

Great article. Let's see how this goes ...
I found this article very informative . Thanks
I know this is an older article, but it is still relevant. I needed to read this! My 10 month old roosters have just recently started to fight after sparring since hatch. They were close until recently. I think that I made a mistake by separating them. I should have let them establish their pecking order without interfering. Thank you for an informative article.
Read more…

hmmmm. This may be impolitic on a site dedicated to pet chickens, rather than meat birds, but im planning on raising both, and my first thought when i saw the suggestion of using flour to staunch wounds was "if i have to bread him, i may as well fry him!" Please take this in the way its meant, in humor heh. If chicken eaters arent allowed on this board, its best i know now hehe.
I didn't think of that, but that's funny! A lot of people do send their extra roos to freezer camp; not unusual at all!
haha, thanks, glad to see im not headed for the chopping block myself

lol. Well we spit and shook on the deal on that little hobby farm... now we just gotta take care of the paperwork and wait for them to get OUT!

i figure it may still be a good 6 months or so before we get settled in and are able to get some chickens, which would be horrible timing, so likely 9 ;;sigh:: ah well.

patience is a virtue they say

As for roos and freezer camp, i personally think its much better to let them grow up a bit, live a happy chicken life, then become dinner, than to be put in a plastic bag and smothered at hatching ;:shudder:: but again, thats my personal bias and detest of waste heh. Thank you for being so welcoming

Wow, I've never heard of smothering a hatching rooster! I agree with you, that's terribly inhumane.
Nice job!!!!!!!!!
wow! so informative!
You must log in or register to reply here.

More from The Chickens' Maid