Article Gallery
Leave a rating
To-Do:
Run placement: Under the back deck! Needs to be enclosed, only framing that will need to be done is for a door on one end so I can get in to feed/water/care for them!
Build a coop! I got 10 pallets for free today (1/16/11), so I'm halfway there! Also, picked up 2 pallet crates, so with a little modification and a few more boards, the walls are done too! 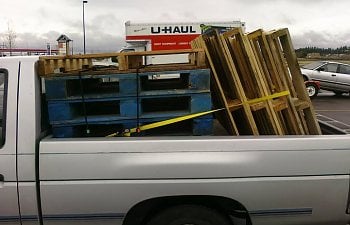 Picked up 4 concrete blanks with brackets (1/29/11) to make them into adjustable piers for the pressure treated 4x4's that the coop will sit on, time to get building!
Turn Plastic Tote into Brooder Box - Still need a grate for the hole in the lid. I got a 45-Gallon Plastic tote that "locks" (the green parts of the handles fold over & lock in place) and it's has wheels on one side of the bottom so I can easily move it if I need to. The Hardware Cloth is being shipped, should be here around 2/8/11! 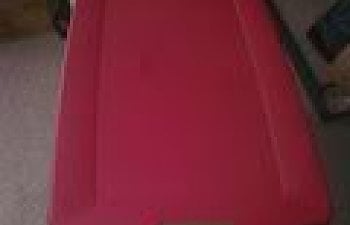 Purchased a Heat Lamp and Red Bulb @ Aslin-Finch! (1/29/11)
Thermometer! Cheap and easy to get, just need to rememebr to get it. 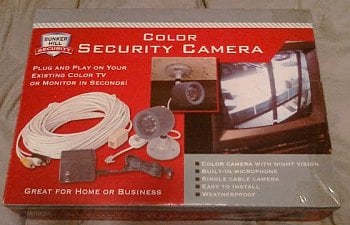 I got a new toy! Color Security Camera with Nightvision and sound! This was on sale for $25! We went in expecting to pay $30 as we had a coupon, but they were on sale for even better.

I had my choice between RIR, BO, SLW, BR, and a sex-link (either Golden or Black). The EE's won't be in until mid-April, so no green eggs for me.

Oh how I wish I could get one of each! I made my chick choice! I'm getting 2 SLW and 1 BR! Yes, I know they'll all look about the same...black and white, but Aslin-Finch won't be getting their EE's in until mid-April! I can't wait that long! Mine will be coming in on March 16th (ish)! Today (2/1/11) is the day to start ordering chicks at Aslin-Finch! I actually ordered mine on Saturday, but that was only because the nice women working told me I could rather than having to come back today! 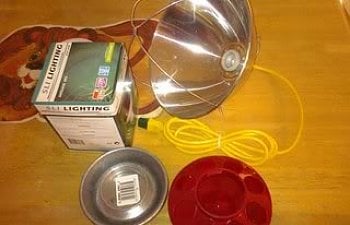 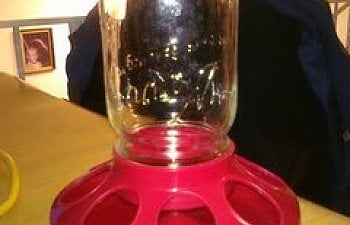 The waterer is galvanized metal...when they go into the coop, I hope to have a nipple system installed.
After the chicks have grown into the coop outside, the plastic tote will house their feed/grit/oyster shell/first aid kit in the coop. (Will cover the open "grated" area to keep poo and such off the feed) Or...I may just sell it to recover a little of my $ and buy them a brand new tote for their feed!

So before the snow started flying again...I did get part of the coop built! That's "all" I have done...I'm needing to wait on better weather to get out there more. It's snowing & raining today (3/1/11) so it won;t be today, lol. I put vinyl tiles down before the crates went on, so the vinyl runs across the entire floor, including under the framing! Based on # of tiles used...this thing as more square footage than my master bathroom! 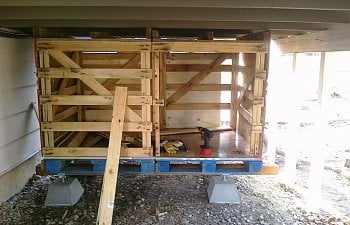 Also...
READ Raising Chickens for Dummies! Currently on page 274 (3/5/11)...I promised myself I'd read the whole thing cover to cover. I skipped the part about incubating eggs...I have no plans to hatch eggs at the moment.
I really need some nice dry, WARM weather so I can get done...
Plans for coming weeks (3/1 & beyond): Need to install the 100' roll of hardware cloth to make the brooder top and start the outdoor run. The area we are enclosing is approximately 10.5'x13'! We have some 2"x4" welded wire (already here from former owners), we will use it at the top portion of the run and wrap the lower half in 1/2" hardware cloth. Whatever the larger mesh won't cover will get the hardware cloth, including the door I need to build. We may need 2 rolls of the 100' length!
Since we're building so close to the house, I'll have electric from the outdoor outlet (it will actually be located inside the run)! That means the gals will get a small fan in the summer and a little heat/light in the winter!

So much progress! Penned out drawing is what we ended up with, except the dashed area, that still needs to be done, but that will be the “buffer zone”/storage area, no dogs or chickens allowed! Gate/door into run will open into the smaller area as well, so if my 70 lbs dog tries to get in, he won’t be able to push it open, swapped the shed door to open out instead of in this week too, I always hated how much space just the door took up! So much more interior space was opened up! It’s not quite as much floor space as I was envisioning, but 190 sqft is enough for 10-15 hens (15 assumes we don’t lose any to shipping, freezer camp, or anything else), with 8+ foot high roofing, I can build up “play” structures to keep them busy as well! The roof and framing is where I had no experience and relied on my stepfather’s (who did this sort of thing fir a living 50+ years ago) knowledge and ability. Now, it’s (almost) ready for what I know how to do...fencing! My helpers after this week will be my 6 and 8 year old children, good thing all the time we spend on construction can legitimately be called “school hours”! They need 6 hours of school activities 5 days a week...both are down to only needing to do about 6 lessons a week (language arts and math) because they have completed all of their other courses! Once a week, we will send update photos to their teachers to show that we aren’t “just playing”, lol. Real life applications of math, science, language, not sure I can count this as social studies, but it’s definitely physical activity too!

The going is SO SLOW, but it’s going! The run is fully fenced in, gate/door is up and secured with 2 90° hinges and caribeeners. When I’m in the run, there’s a locking hasp to keep the door closed. Part of the vent holes have been drilled and covered in hardware cloth, trying to keep the noise down on the sides that face the neighbors, so keeping the venting on the 2 sides that face our yard. Outside the coop (shed), we are building what I’m calling a “foyer”. It’s a fenced in mini “run” that works as a “safe space” should the chickens get out of either the coop or the run when doors are opened. We will enter this fenced in area first, shit the door, and then enter whichever space we need into. The upper half of our shed (it’s a 2-story building) Is still technically a shed, but it’s a space we’ve never used in the 13 years we’ve lived here. It will house what my husband is calling “the chicken network”…WiFi boosters, controls for the security cameras, wiring for electrical needs (water heaters, lights, the automatic chicken door power source). To get to it, he’s rebuilding a small deck and the only way to access it will be to bring a ladder out (we don’t want our kids playing up there). The gates to get into the run and into the foyer are HUGE, the run gate is 96” tall! The other gate will be built later this week, parts are arriving today thanks to Amazon’s fast shipping! The girls are rapidly outgrowing their brooder…but we can only do as much as we can do after work and kid schedules (our oldest gets 1 week off in the summer from karate classes). Mondays and Wednesdays are packed to the gills, so hopefully we get the door up Tuesday and the foyer fenced by Friday night.

Aiming for a “move out” next weekend!

Finally out in the coop! They went outside Sunday evening and are still learning about “the great outdoors”. It was so hot last night, there waters were hot enough to make tea in!

Still have no idea on several of their breeds, will have to start an “identify me” thread at some point.

1-Stella-Delaware (big red comb, but I’m holding out hope because I’ve had hens in the past that looked just the same that were great layers…also, I don’t know what a “typical” Delaware should look like at 9 weeks old)
2-Lovey-white Cochin (omg, what a fluffy butt!)
3-Muffin (Muffy…no idea, leaning toward blue (BBS) Ameraucana…I doubt I’m that lucky though)
4-Reba (RIR)
5-Peaches (Golden Buff)
6-Carmel (EE)
7-Praline (EE)
8-Buddy (PBR, maybe a Dominque?)
9-Penguin (Black Copper Marans…she’s growing into a stunning bird IMO)
10-Sassypants (frost white legbar or leghorn)
11-Delta (same as Sassy, I honestly can’t tell them apart anymore)
12-Lady Eggsalot (my thought she was a splash Orpington, EE wasn’t in any of the assortments I ordered, which is why I ordered 3 EE…so maybe she’s an EE?)
13-Goldie (GLW…she still looks penciled to me)
14-Shadow (Black Jersey Giant? Her feathers are coming in with a very dark brown lacing, she’s definitely not solid black, what lever she is!)

Shadow is my scissor beaked chick, her lower jaw sticks out at almost a 90° angle to her upper jaw/beak. She has figured out how to thrive as she is though, but man does she look funny straight on.