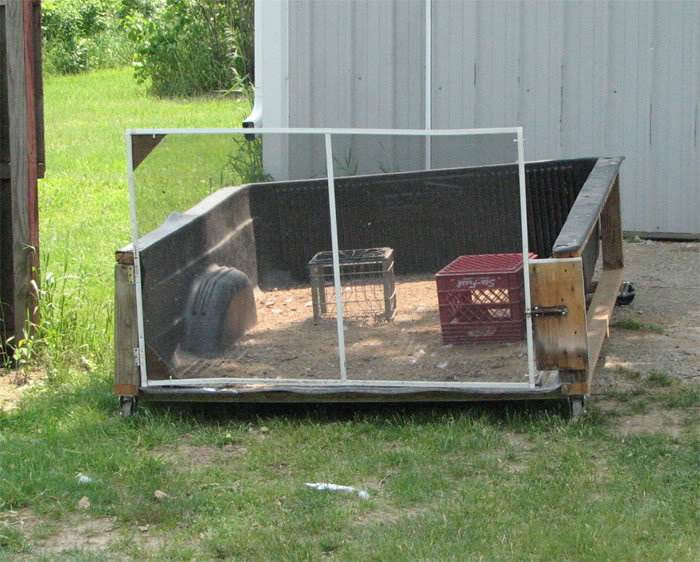 Well if you made it this far then your doing better then me. I have been on this site over a year or so and am just now doing this page. I have a little 8 acre farm in southern lower Michigan. its not to bad here, it has a great roll to the yard and there is a small pond out back. My ducks & geese haven't died yet due to my stupidity so I guess I haven't done to bad? I am in the process of building a huge pen and a total redo of the ducks hut so as they have a nicely drained floor. the geese are the easest to work with. I have them dialed in to where they go to bed when I want and don't argue about it. the ducks don't like me...they are my wifes.
she feeds them canned peas and lettuce left overs. today she fed them some Kix ceral. I had to laugh... they turned their beaks up at it.
Well lets see how much things have changed, I started out with a 55 gallon fish tank and 6 ducklings.
then I moved them to the hut. they had the run next to the barn when smallbut still went in the barn at night and slept in this 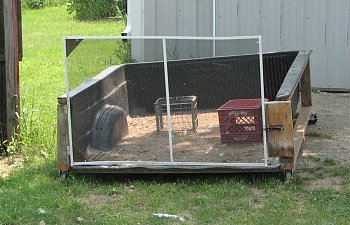 it assured they were safe in the barn. they spent the days out in the pen. 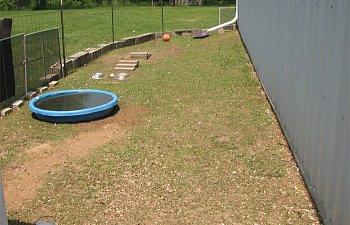 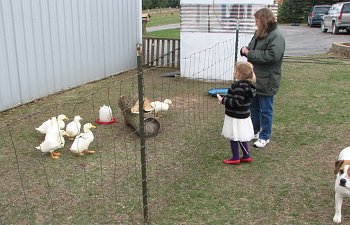 we let them freerange most days as they would hide under the pool deck to get out of the sun. however the geese were added and then it got crazy keeping the poo off the driveway and walkways. so now we have a fenced pen and they are a bit farther from the house. 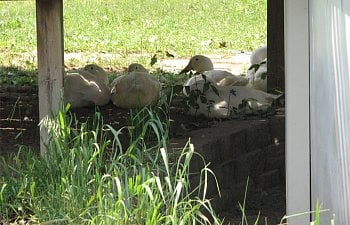 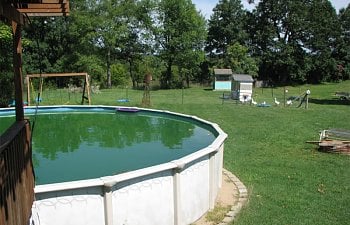 when I built the goose hut I had to modify a design I did for a hunting blind. 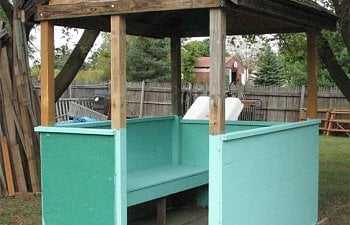 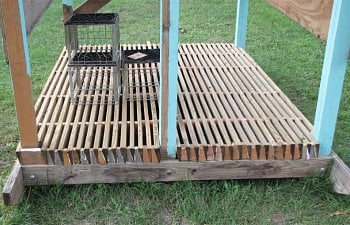 the slat floor is so labor intensive i don't recomend it for just anyone. it took a week of cutting and sanding to get the peices in place. I did use up all the scraps in every bin around the barn to make the spacers.. 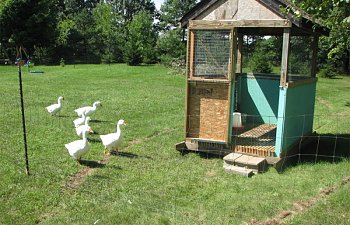 now with the goose hut done it was easier to dael with them. I did all the mods to their hut while healing from a knee replacement. it help to keep me moving.
now the duck hut was another matter. It needed the slatted floor. I needed time to build it. it started out as my kids bus stop hut. its about 17-18 years old. so it was a no brainer to use it. 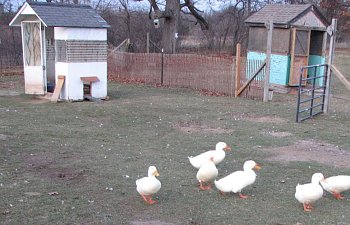 as you can see we used sand for a while. it was cheap since I have a small gravel pit out back. every couple days my son would go dig a load and haul it up. then we filled holes the ducks dug around the yard with the old sand. 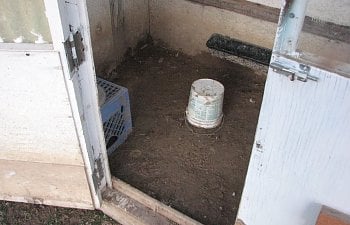 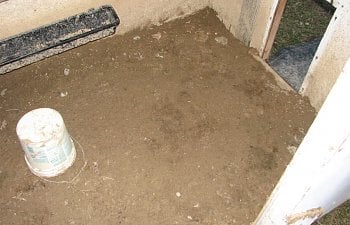 as I made time to finish the new floor I had to find a non toxic oil for it. I just happened to have a bunch of left over peanut oil. so it got a coat of that before installing in the hut 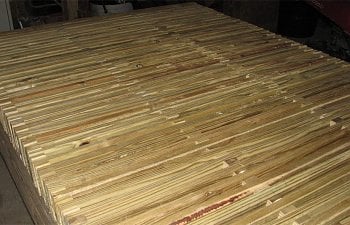 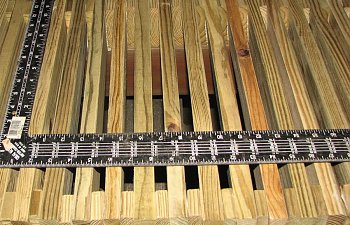 after I assembled this I let the glue sit over night. I used a belt sander with a shop vac attachment to make it flat. I didn't want to leave anything the ducks could snag a toe on. its working well so far. 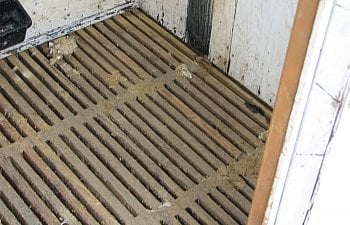 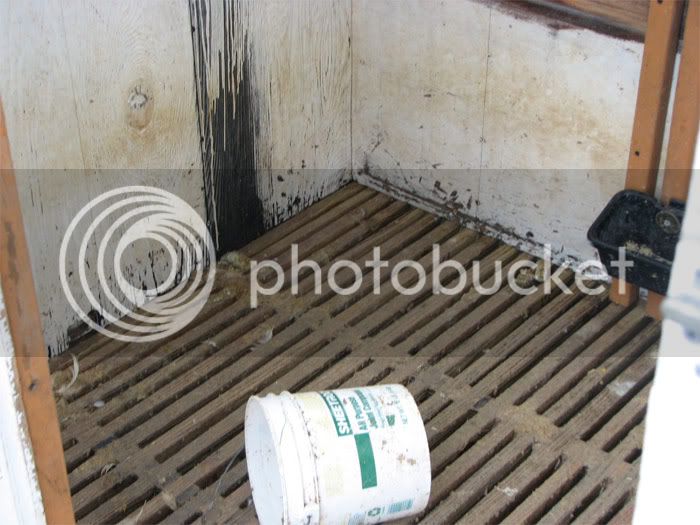 as you can see its a tiny bit of poo on the spacers but it washes down easy and the ducks will knock most of it betwwen the slats before I get the hose out. 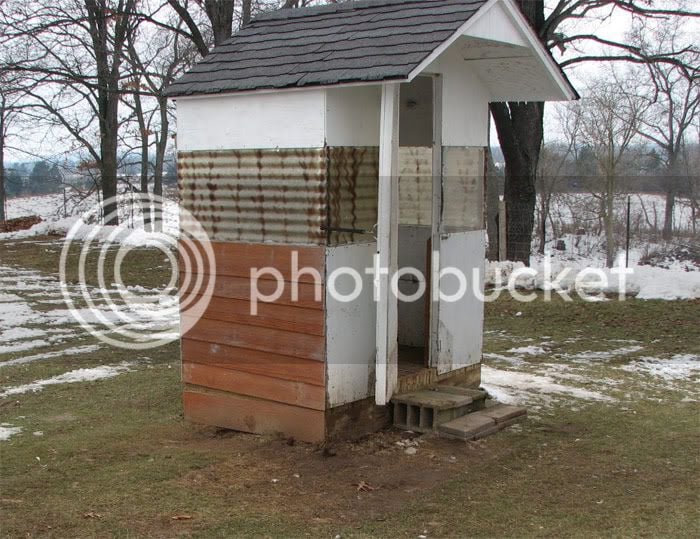 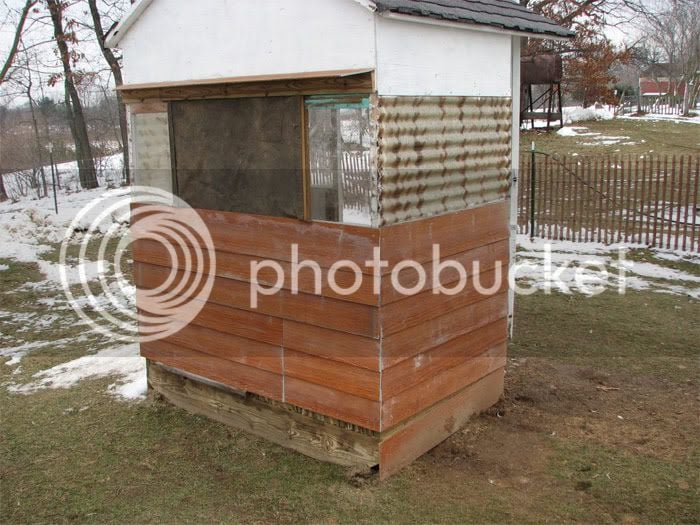 some more recycling. I used cement board shingles I salvaged from a friends house. they were all headed for the dumpster. if you can see in the right pic I have a slot cut for a future door and ramp in the hut. its already framed for two small doors behind the walls. on a side note I have been using landscape fabric over the wire mesh to keep the wind down. it still lets it breath without a bunch of fiddling with windows and such. I used a peice of board over the mesh to prevent water getting in and just made a ledge out of it above the window. seems to work well.
if you notice the snow fence in the back ground its just between the ducks and geese. I have wire around the whole pen. I figure at some point I will have to seperate the ducks to protect them from the geese.