Okay, I currently own 14 chickens . . . but they are in 3 "groups". What order would you recommend I introduce them, and what is the best strategy.

-First group are my 2 laying hens currently at my farm
-Second group is a similar aged Rooster (who use to live on my farm) and another rooster and hen. They are currently at a temp home while I expanded my coop. But they all get along (somehow 2 roos, 1 hen?!?).
-Third group is my week old group of 9 females from MyPetChicken that just came in last Tuesday.

I have read most all the threads of how and when to introduce young chicks into an established flock, so I have no issues there. The group with the 2 Roos/1 Hen is what is throwing a wrench in the works. Should I bring the Roo/Hen group back ASAP and get them intertwined with my current 2 hens so they can get everything straight? Or would that introduce new hens, which could make the Roos become less-of-friends?
Or should I wait until the whole crew of hens (2 current, 9 growers) are intermingled about 4-6 weeks from now. And then bring the roos into the mix?

This is going to depend on you coop and run set up. I think if you can, I would wait until you have the new expanded coop completed, but even so, I would like know what your final dimensions are and the shape of the set up.

Space, age of birds, sex of birds, number of birds has very strong influence on the success of the integration. The fact that you have 9 chicks (which outnumbers the older birds) is a good thing. That age group would be the lowest on the pecking order, but with a lot of them, that spreads the pecking out.

Change in the coop/run is discombobulating to chickens, so my preference would be to put in several hideouts, clutter in the run, a hide out or two in the coop, just a piece of cardboard leaned up against a wall, and a couple of feed stations in the run. Then I think I would put the chicks in the set up for a day and a night. Let them get the feel of the place, find the feed stations, then very late afternoon, I would bring in all the older birds at once. They will be strange to each other, to the chics, and to the set up. The urge to roost will be pretty strong, stronger than the urge to do much fighting or pecking, although there will be some.

Go down early the next day, and keep an eye on them several times a day, but I would expect this to work pretty well.

The new coop is setup and functional. It is approx 10X6. We have the 2 "on farm" hens in a small TSC Coop that is about to fall apart. I am hoping it lasts through the introduction phase, because I plan on putting the "new 9" in the new coop.
My on farm hens and the Hen/Rooster Trio are all between 1-2 years old.

I have the new coop and the TSC coop all in a large 20ftX30ft welded wire run, but all the chickens will be free range once together. 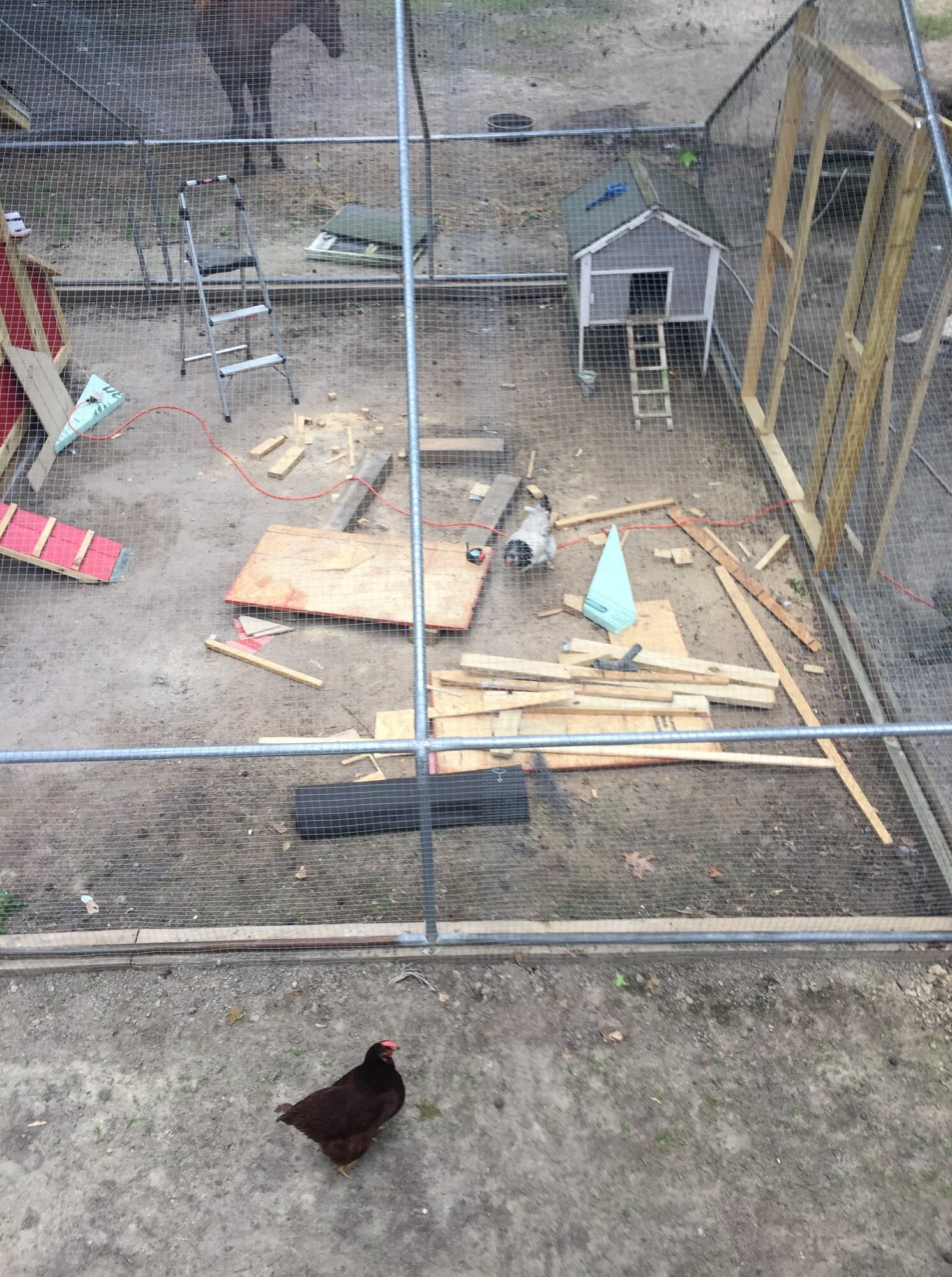 Here is a good pic I took last week. You can see the TSC coop Top right and the new coop off the left of the screen.
When introducing the new chicks I am going to run some welded wire right through the middle with a section of several openings that only the new chicks can fit through.

So the TSC coop would be quite a tight fit for 5 full grown chickens. 2 Hens plus the trio from the other farm. Should I wait till the others are all 1 crew for a few weeks and then bring the Roos and new hen?

No, I would give the 9 chicks a day and night or two advantage. Let them explore the set up, you go in and give them a mock chase or two, so they find the escape holes. Then add all the rest of the chickens and lock up the little prefab coop. No one has home court advantage, everything will be a bit strange, and that should really make most of it go pretty good.

Do put some clutter in your run, saw horses, pallets, small pieces of plywood, places where any bird can get under, on top of, or behind and out of sight of the other birds.

I think you have a good handle on the littles. It's the adults you say you have concerns about.
Despite what you read on here, there is no magic about hen-rooster ratio. You are seeing proof of that. But when you make changes, either relocating them, changing housing, or adding or subtracting chickens from the flock you can alter the pecking order. They have to sort out the new flock dynamics. Sometimes that is so peaceful you don't notice anything going on. Sometimes it gets pretty violent. I have no idea what will happen when you combine those five adults.

I'd try combining the adults now, before the chicks are involved. You have that TSC coop available where you can isolate a chicken if you need to. If you haven't done it yet I'd finish building that wire pen around that TSC cop and house the two hens in that for a week or more before I let them merge. Then base what you do on what you see when they react.

A
How to combine chicks with chickens?

Which rooster should be culled?
4 5 6

M
One hen left, how to introduce new ones