4 weeks in with 2 broody hen hatches.

So far I have 11 chicks from two separate hatches. I thought I'd give a brief update on progress and how its been going.

The first hatch is 8 chicks, 4weeks old. Theyre in a sectioned off area of the main run with a small coop. They were hatched there and raised by their mama in view of the main flock through a 2x4 fence with 1/2" mesh covering the lower half. Their whole run also has the mesh around it too. At 3 days old the chicks came down the ramp and started foraging with mama. It took us 3 nights helping them up the ramp after mama decided it was bedtime before they started doing it by themselves. They've grown and learned a lot and run around like mini chickens mimicking mama's evey move.

The second hatch is only 3 chicks because another hen went broody and I couldn't break her. There's more to that story but that belongs in a different thread. These chicks are 1 week old today and were hatched and are being raised by their mama in the main coop and in the main run. They started down the ramp 3 days ago and have been needing help going to bed each night, hopefully tonight or tomorrow they'll get it. Mama keeps coaxing them but they're not quite ready yet. This run is also 2x4 fence but no chick proof screening except between the other broader run. They do wander a few inches outside occasionally but always run in if our little dogs come down or mama calls to them. I was so worried at first but after watching them those worries are gone. They're doing so good and I'm starting to notice all their little changes towards chickenhood.

Today was a milestone for all of them. After reading so much on BYC about integration I decided to pull only the mesh between the broody and main run. I got some treats and spread it on both sides of the 2x4 divider fence and watched what happened. Several of the big littles were in the main run within a minute. All the adults (except little littles mama) and the rooster came over and started eating the treats. Everyone was fine until the treats were about gone. I saw the top hen peck one chick just once when it got to close to her. A few minutes later she and mama hen started facing off through the fence with a little wing flapping, fluffed neck feathers and I'll call it false pecking. After half a minute it was over and everyone went back to peacefully milling around again. I watched for awhile longer and the big chicks wandered back and forth through the fencing, their mama kept an eye on them but was calm, the adults wandered around and didn't show any negativity towards them and the dominant hen was going about her normal business. The roo wandered all around, including through the chicks that came over, he almost acted like he was patrolling/protecting the chicks or just keeping the peace all around.

My plan is that in a day or two if the chicks are mingling well I'll bring mama over and let them all start using the main coop. I've had so many worries and fears through this whole process but with all the info on BYC I've been able to experiment and try different ways to do things. Wirhout BYC I feel I never would have been able to have so much success in such a short time. This has been so much fun and I've learned so much so fast! Thx to everyone here and I'll post some pics a little later today. 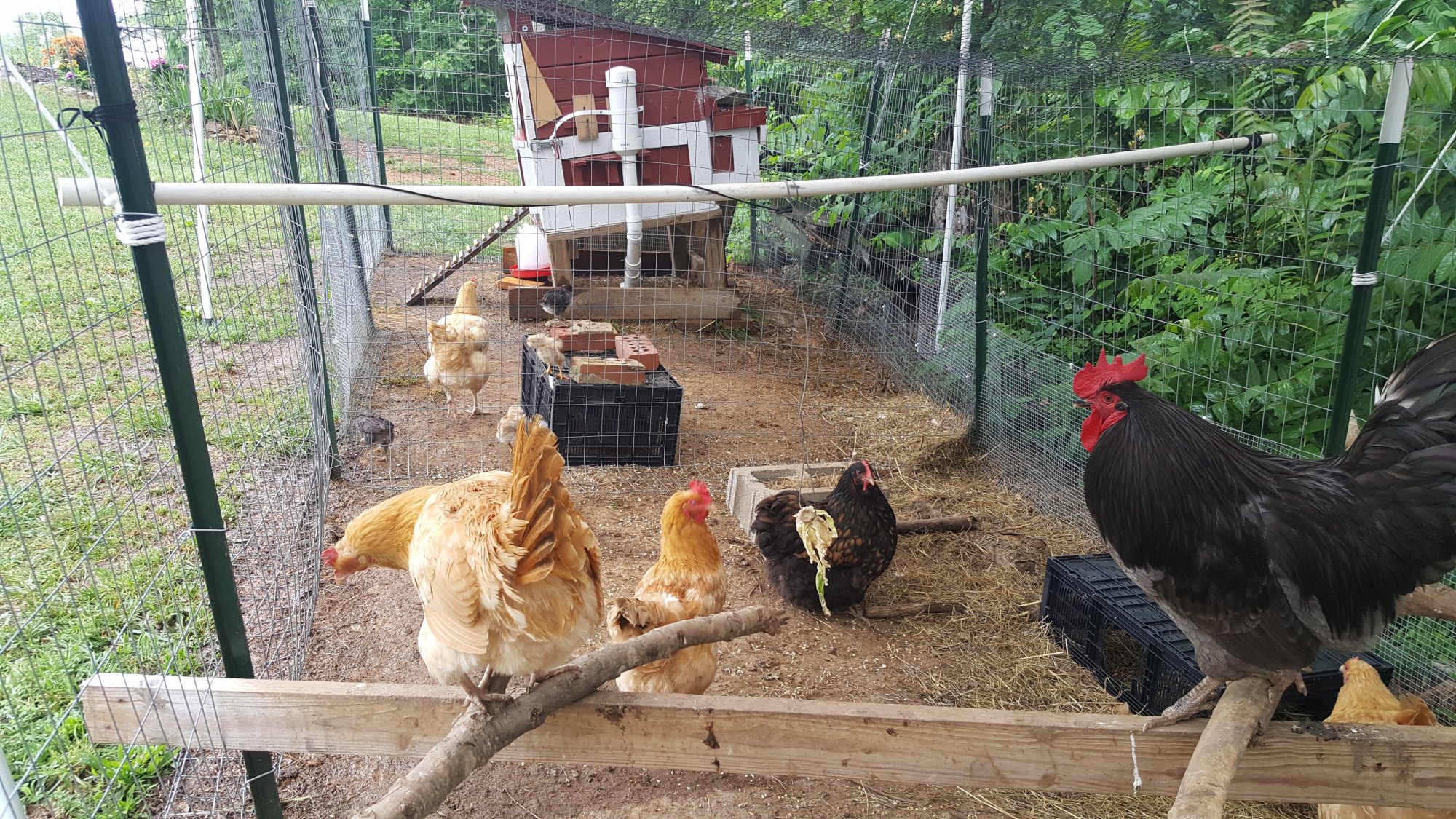 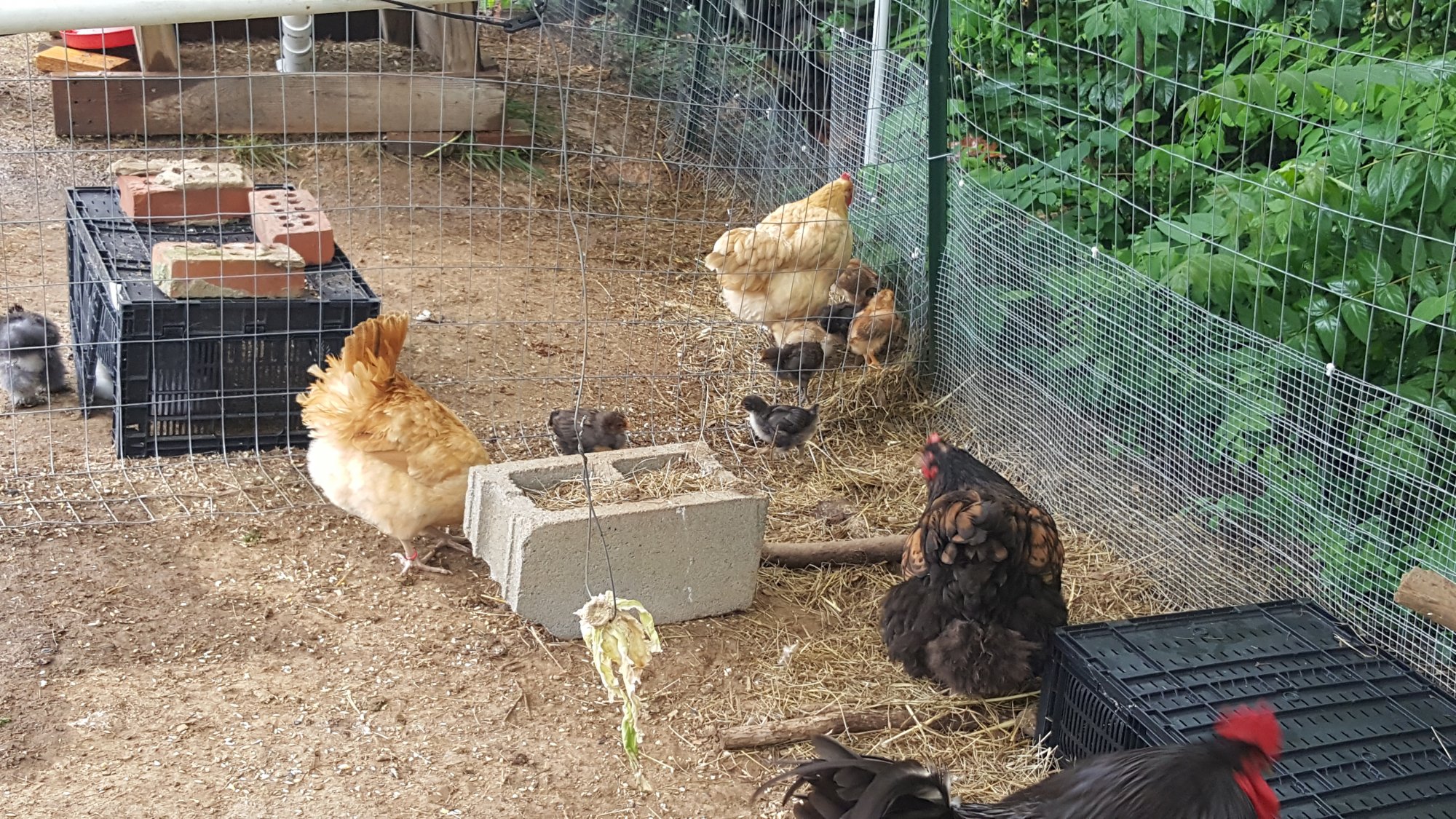 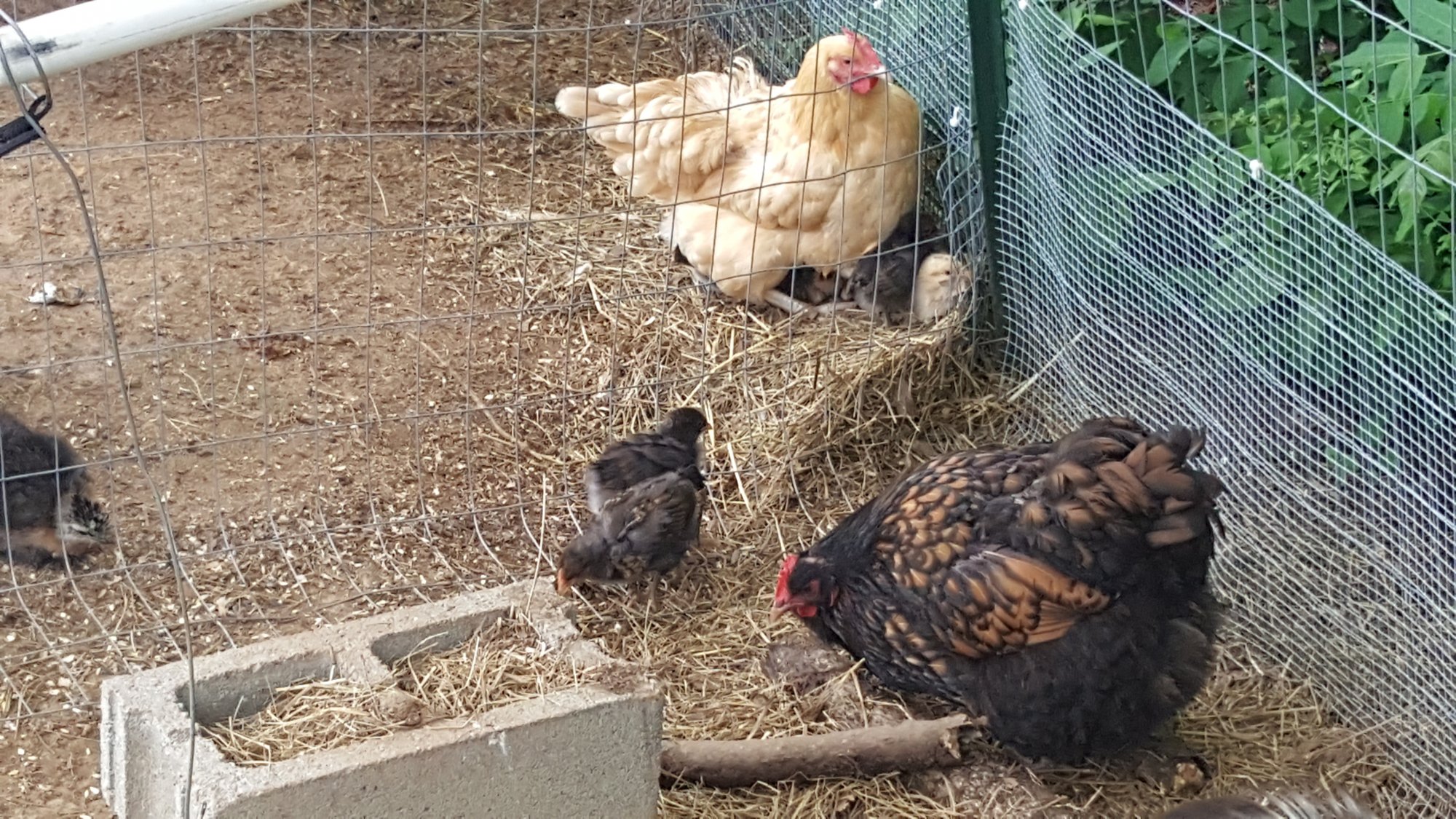 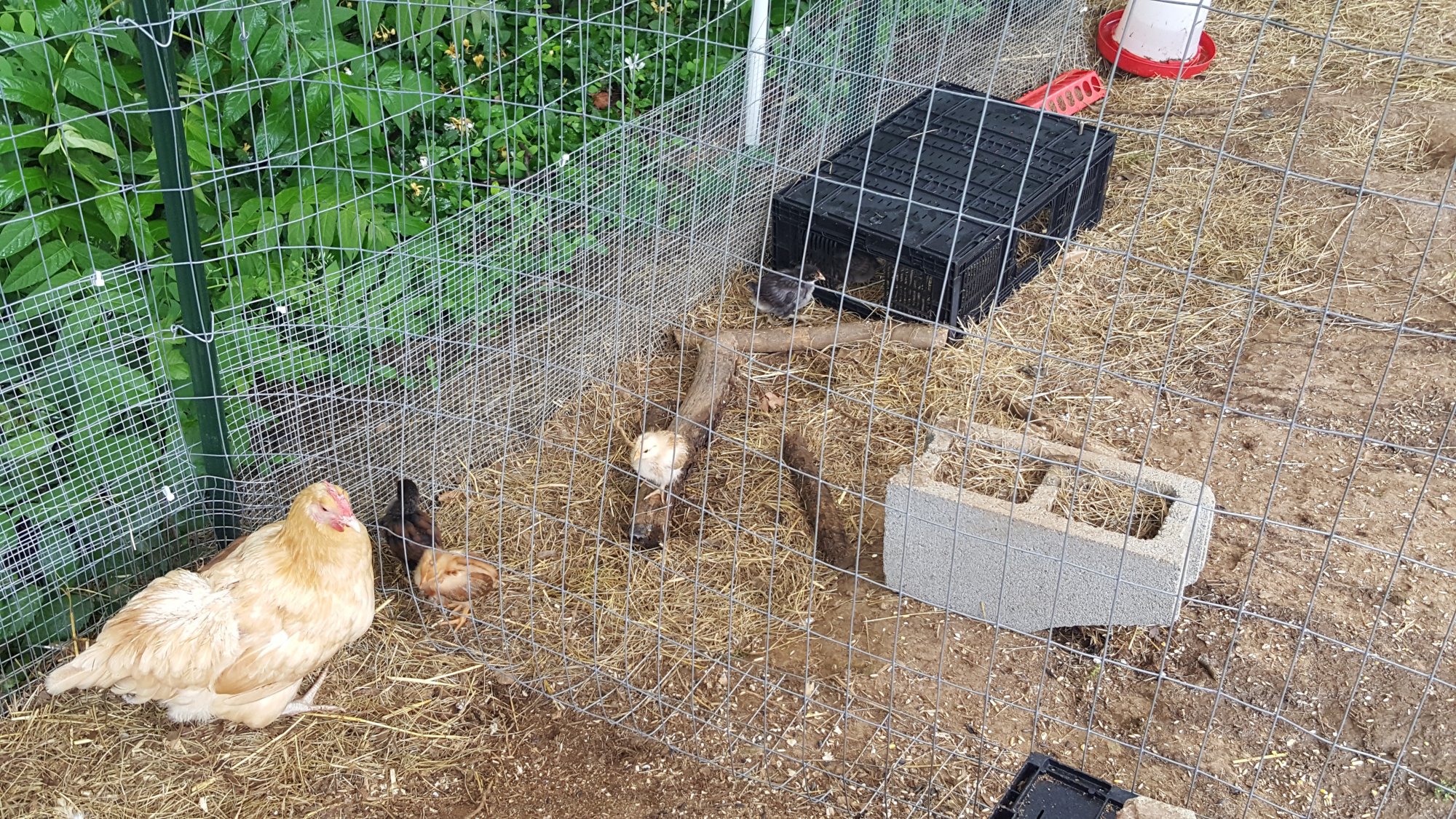 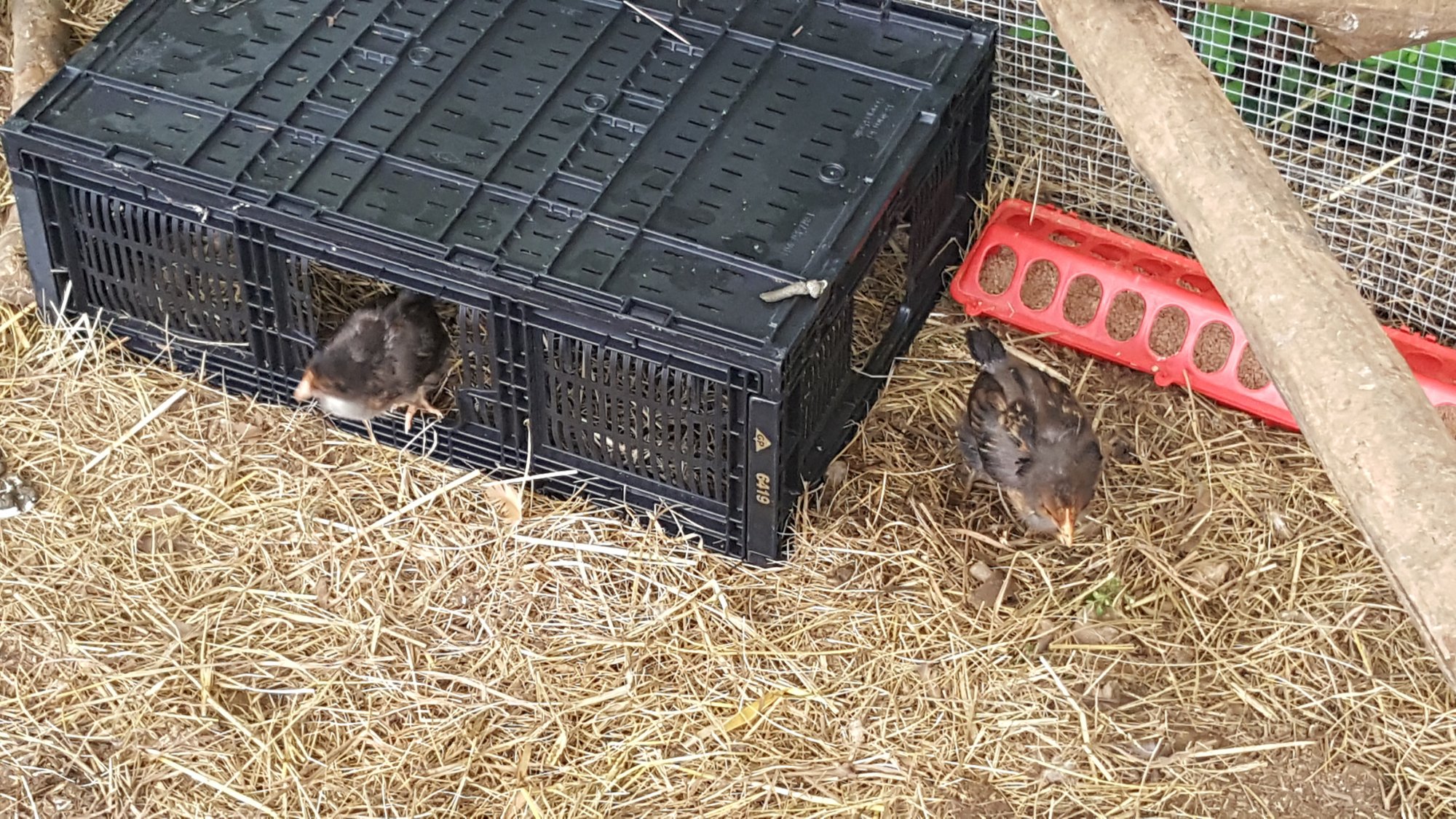 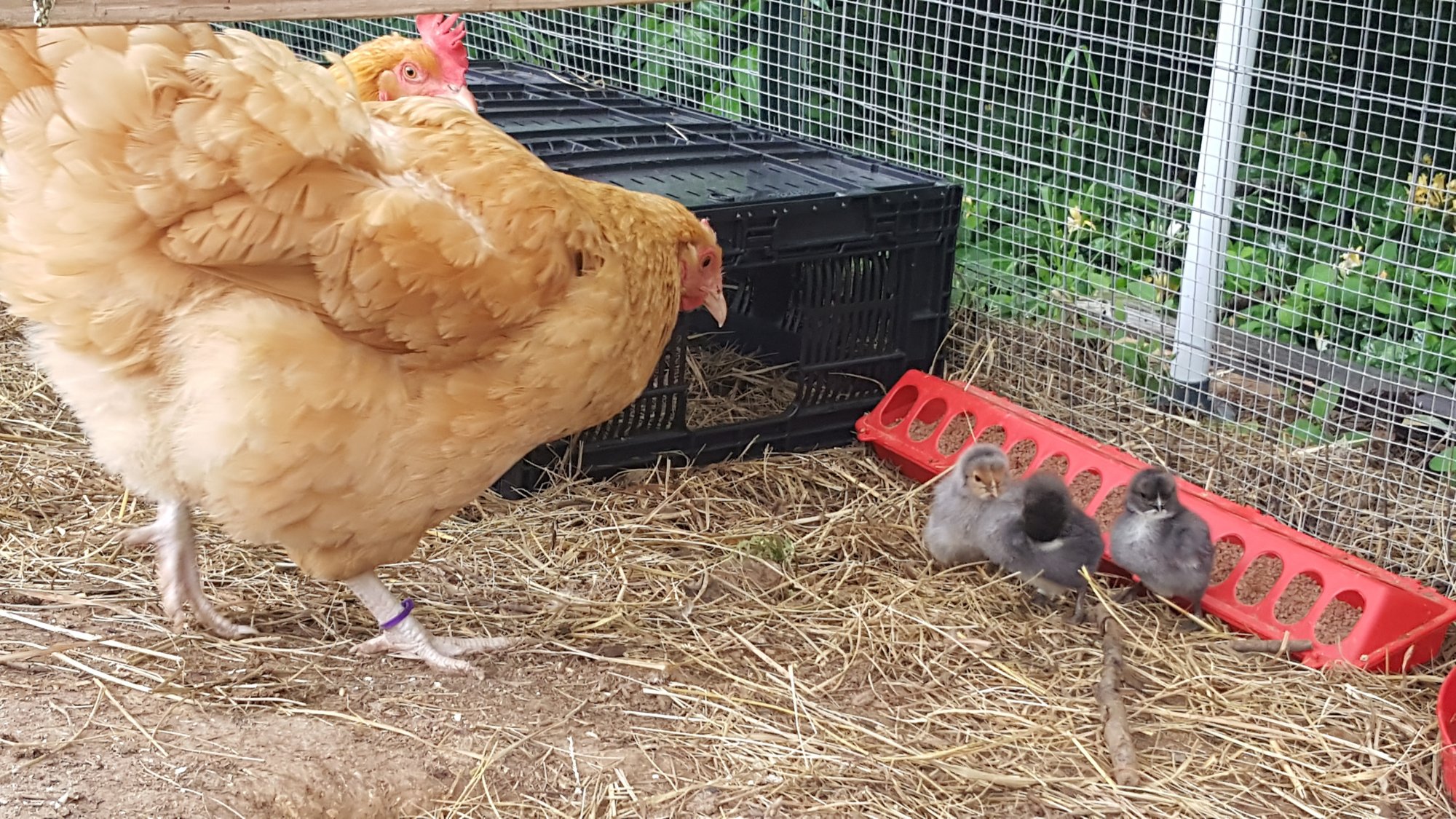 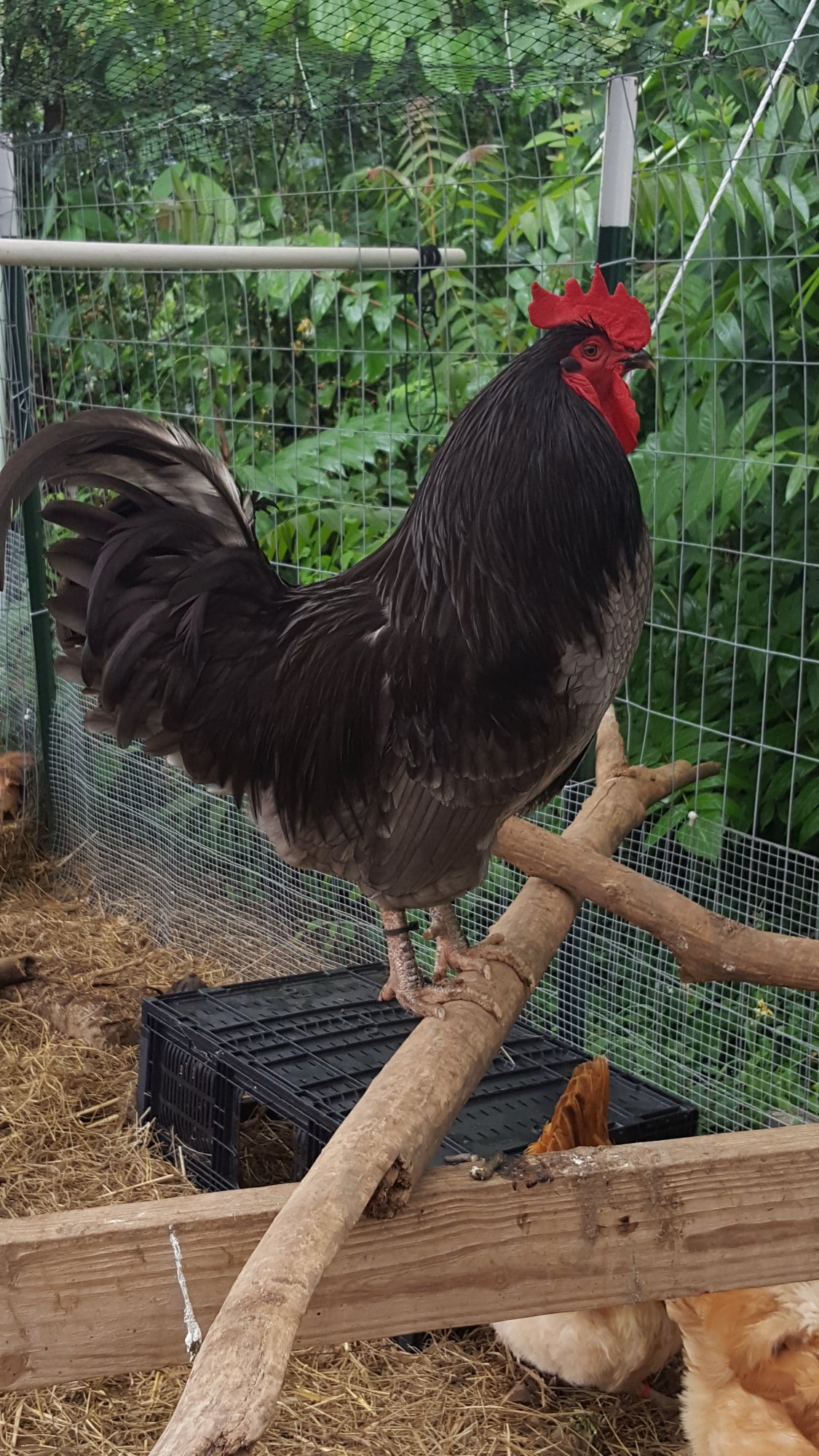 The only conflict so far. 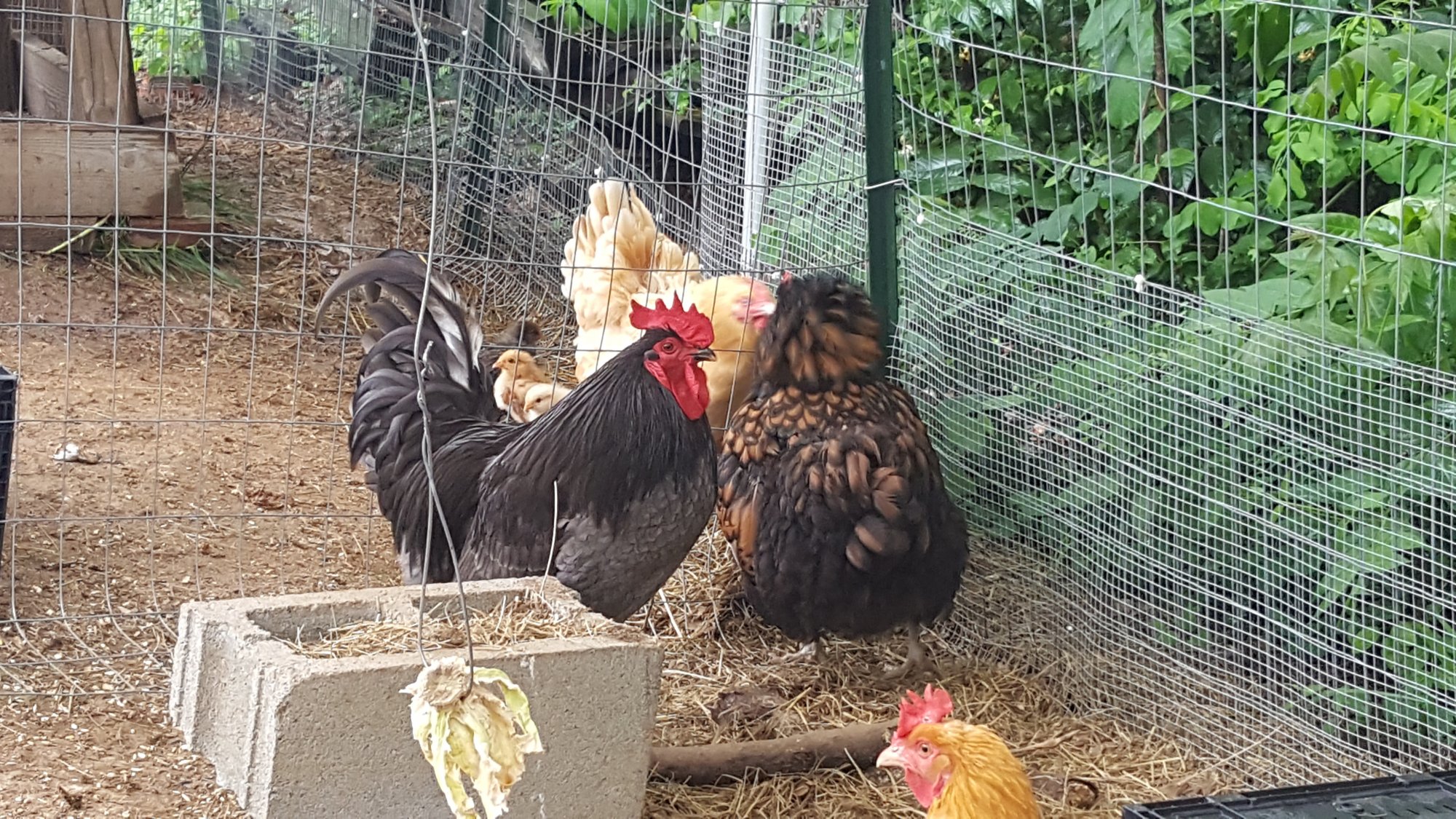 I'm jealous of your ability to have real mom's raising their babies.

I'm jealous of your ability to have real mom's raising their babies.
Click to expand...

Thank you. It's been a very interesting experience. Batman is friendly for the most part. He's definitely the protector of his flock. Postured me awhile ago but it was when I was relocating my broody. I postured back and he keeps his distance, he knows I'm the boss. He's generally pretty nice to the hens too and always shows them food and treats before he eats any. I think he's a keeper.

Well now that the littles can wander they're definitely doing that. I've been checking on them frequently and I've found them in the big girls run and outside the run grazing in the yard. I about freaked out at first but they keep changing up, first a few are out then they switch up and others are out. They stay pretty close so I'm getting more comfortable each time I check on them. Even found my 1 week old chicks out a couple times.

So far no issues with the adults at all. They wander around them like they've been in the flock since they were hatched. In a couple more weeks they'll be to big to escape and then I'll start supervised free ranging with all my chickens when I want. Funny to think the chicks will be teaching the big girls something. Lol

Glad things are going smoothly.
Batman is the perfect name for him.


Pstock44 said:
Funny to think the chicks will be teaching the big girls something. Lol
Click to expand...

They are amazing creatures.

I'm happy with the way all the chicks and adults are getting along. The only thing I've seen is mama#2 pecking at any hen that appears to be taking food from the chicks. Otherwise she's not bothered if the chicks are wandering up close to the adults. Today they all seemed to stay very close to or in the run. Didn't venture out to explore like they did yesterday.

I just let mama#1 and chicks free range with a couple of the adults, one was mama#2 with the week old chicks. Everything went well except for one confrontation between the two mamas. #1 thought #2 was to close to her chicks and they had a hen peck episode. I stepped in after a few seconds cause all the chicks and other chickens left the area! Nothing else after that so I'll try this again tomorrow then maybe try putting mama#1 in the main run Wednesday and see how they all interact there. I think it went pretty well for a first time.

Batman got his name because he's dark colored and when I bought some multi colored zip ties for leg bands they came with some charms. One of them was a Batman emblem so he got it, and his name.

supposed to say Quote: Batman got his name because he's dark colored and when I bought some multi colored zip ties for leg bands they came with some charms. One of them was a Batman emblem so he got it, and his name. 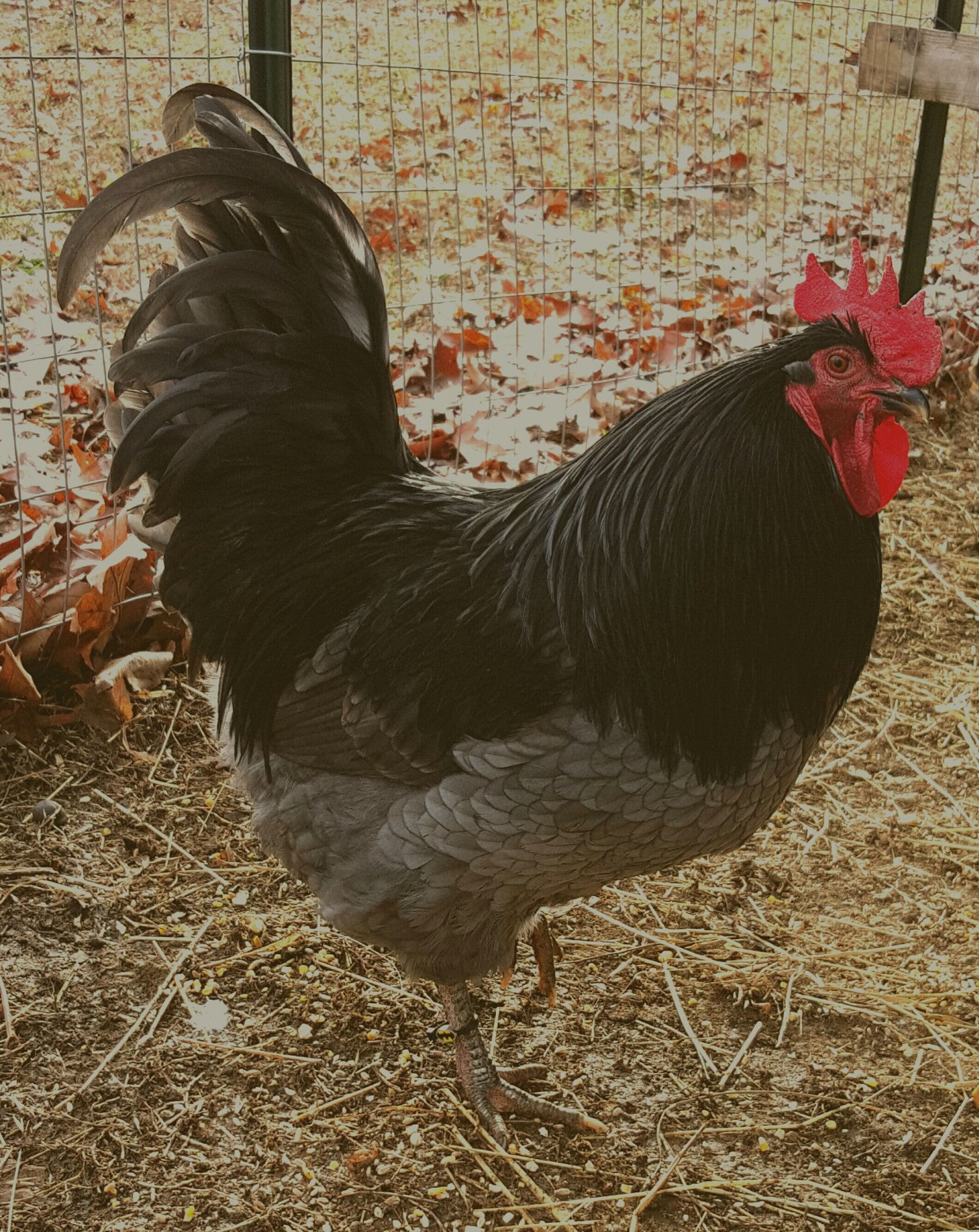 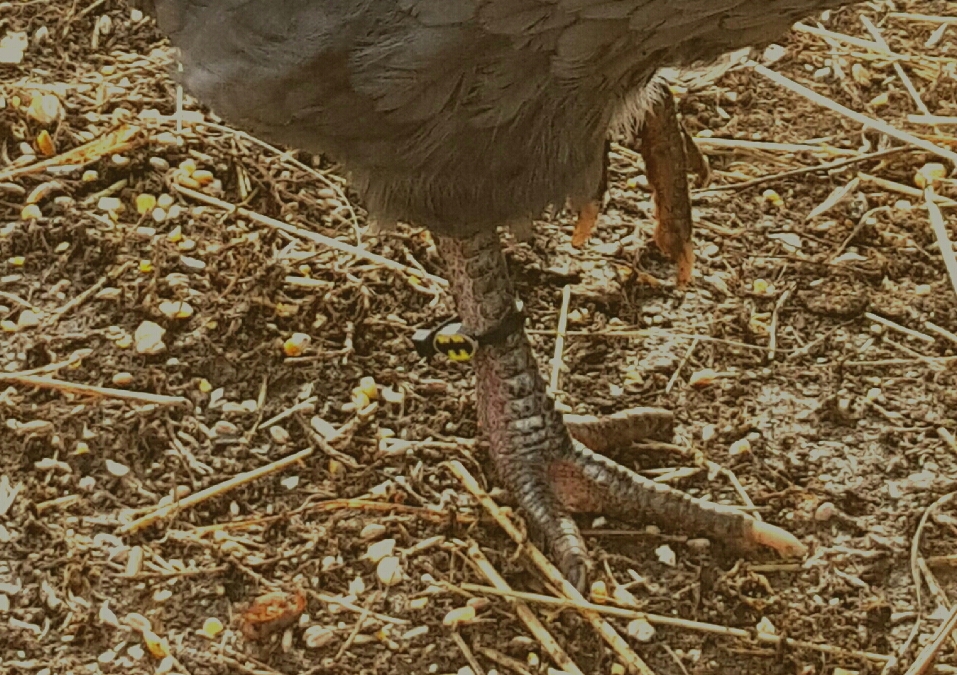 Help. Mama Hen goes in coop and leaves babies behind
2 3 4