Okay so there has been lots of chicken drama lately. A group of my hens have become egg eaters! But worse, the big ladies are picking on the little silkie ladies. They have separate coops but I let them free range together during the day. And the second the coop doors are open. They're raiding each others nesting boxes! It's been a heart breaking week.

But back to the original topic, one of my Minorca hens turned one of her favorite dirt baths into a little nest this morning. She dug down deep in the dirt and had her egg and refused to get up for breakfast. I figured she would get up when she was ready and left her alone. About 6 hours later I went to give them their mid day snack and she was still laying there in the sun!

Her wings were stretched out so I originally thought she was dead. I got closer and she picked up her head but didn't move. I checked to see if she had gotten a piece of string or something tangled around her feet. When I picked her up she didnt move her entire body. Her feet were drawn in, very sleepy, falls over when sat on the ground, if it wasn't for her head and neck moving I would think she was already dead. I wet some stones in my driveway for her to sit on while she drank some water in hopes of cooling her off without putting her in worse shock. She can't stand or move. I put her in quarantine by herself to rest.

What else could I try doing? She's not the most friendly chicken so I was afraid to handle her too much and freak her out. I'm a worried mama 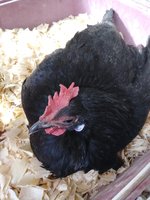 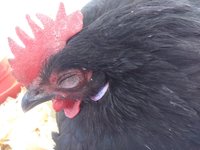 I'm sorry I don't know how to help you other than maybe put some vitamins in her water? Hopefully someone more qualified will come along @azygous.

Is she drinking on her own?
The most important thing is getting her to drink water right now.

Electrolytes are very important. If you have none, give her some Gatoraid.

Keep her in the shade with good air circulation. If you feel she's still hyperthermic, if she feels hot and if her facial tissue and comb is cherry red, take hand towels rinsed in cool water and place on her breast and under her wing pits. This is where most of the blood in her body is concentrated and you can cool her down most efficiently this way.

By the way, this is also how you reheat a chicken suffering from hypothermia, only with warm compresses.

A
What happened to my hen? Heat stroke?
2